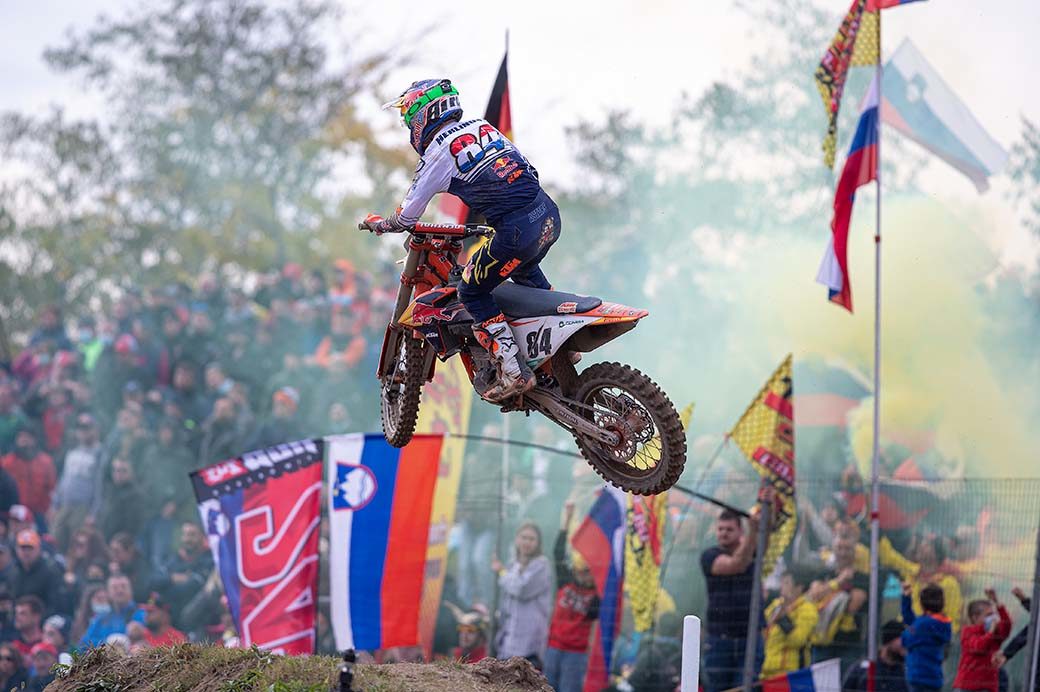 Jeffrey Herlings is the 2021 MXGP champion after two moto wins and a Grand Prix victory at Mantova 2 – MXGP of Citta di Mantova.

Herlings had put himself level on points with Romain Febvre after Herlings won the first race with the Frenchman finishing second. It set up the closest finish to a motocross world championship in the history of the sport.

After 35 motos – many of which delivered thrilling racing – Herlings and Febvre, remarkably, could not be separated by points as they lined up for the climactic race of the 2021 FIM Motocross World Championship. Only Herlings greater number of race wins put him ahead of Febvre.

However, at the end of the last moto of the season, the Dutchman didn’t need his superior stats, he won it in style, beating Febvre twice.

It’s fair to say, Herlings was made to work hard for his 2021 World Motocross title. Although he has won more motos and Grands Prix than any other rider this term, his nil points across four motos – two of which came from an injury inflicted by Ivo Monticelli – certainly hurt the 27-year-old Red Bull KTM Factory Racing star.

He visited the podium 14 times, enjoyed 15 moto wins and delivered nine Grand Prix victories for KTM in 2021, who had been waiting for an MXGP crown since Herlings last lifted the gold plate in 2018.

Winning the 2021 MXGP World Championship the way he would have wanted, Herlings raced to a one-one score to deliver his ninth Grand Prix victory of the season. But it was scoring more points than Febvre that mattered at this Grand Prix, and with Monster Energy Kawasaki Racing’s Febvre unable to finish ahead of Herlings across the two motos, the Dutchman won the 2021 championship with five points in hand.

“Just want to say one thing, you know, a lot of people wanted to know what I would have done if I didn’t win this championship this year again – I guess you’ll never know,” teased an elated Herlings.

“People still say I’m not a true world champion – I missed four motos and did get two points for free but I won by five so I think I deserve to win this championship. Still, I want to thank Romain [Febvre] – those guys were super fast, it’s just a pity only one can win.

“Next year will be tough again, but for this year, I’m going to celebrate tonight and I want to thank Red Bull KTM Racing for a great job.”

Although Febvre had two great starts, ultimately he couldn’t quite match Herlings’ speed on the Mantova circuit, while Team HRC’s Tim Gajser looked strong in the second moto – a familiar theme in recent GPs – he too couldn’t hunt down Herlings.

Febvre’s title hopes came to an end on lap four in the second race when he looped out of second place. He remounted but had lost significant time and one place with Gajser taking over the pursuit of Herlings. The Frenchman finished the season with 703 points, while Gasjer finished third in the standings with 688 points.