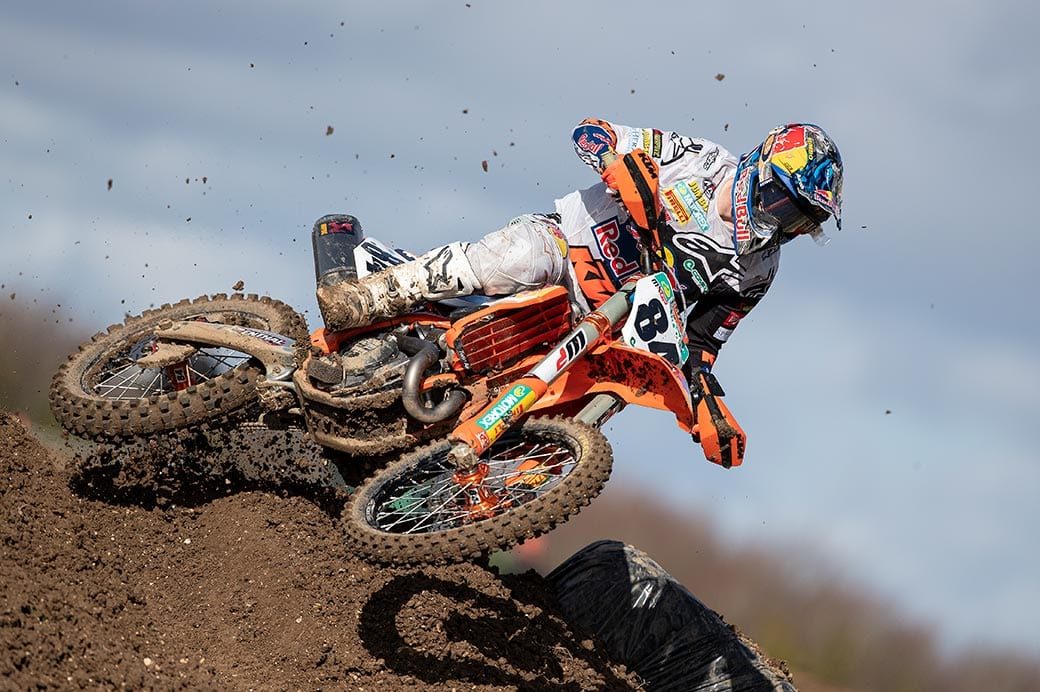 Red Bull KTM Factory Racing commenced their 2020 FIM MXGP Motocross World Championship campaign with victory at a bright but wintery Matterley Basin in the UK. Jeffrey Herlings won the British Grand Prix on his KTM 450 SX-F for the first round of 20 as Tom Vialle finished second in the MX2 class with the KTM 250 SX-F having taken the first moto chequered flag of his young career.

The large and popular Matterley Basin circuit was hit by a variety of weather conditions, from incessant rain on Friday, to showers, strong winds and cold on Saturday to sunshine and bright conditions on Sunday. The track was rough, rutty and a decent technical challenge for the riders and a fine stage to open the 2020 season. Red Bull KTM Factory Racing lined-up with Tony Cairoli, Jeffrey Herlings and Jorge Prado (with a combined total of 15 titles) in MXGP and Tom Vialle as well as Rene Hofer in MX2.

All three MXGP riders made a fast start in the sunny first moto at Matterley Basin and it was Herlings who hit the front early and controlled the race until the chequered flag. Cairoli was a steady fourth in front of Clement Desalle while Prado rode to a solid debut MXGP inside the top ten to ninth.

Herlings could do little about the escaping Tim Gajser in the second moto once he passed Cairoli for second place. The Dutchman kept a consistent pace to ensure a 1-2 for the day and confirm his overall triumph; the 87th of his career. Cairoli’s third place was good enough for the same step of the rostrum – equalling Stefan Everts’ all-time record – and a satisfactory result considering it was his first Grand Prix since last summer and with the nagging doubt of a stretched right knee ligament. Jorge Prado claimed 12th for 10th place overall and 21 valuable points after precious little time riding his motorcycle and just three months after breaking his left femur.

Jeffrey Herlings: “The first race out of 20 and I was consistent: two good starts, led the whole first moto, got into third pretty quick behind Tony and took second. The track was sketchy and the sun was really low. It is still that time of the year where it gets dark quite early, so it was hard with the shadows. I didn’t want to take any risks and I was happy with second. It was a good weekend and I think we improved the bike over the winter because this was the first real test, let’s say. I am looking forward to Valkenswaard now and my home GP.”

Tony Cairoli: “It is nice to be back on the podium after so many months without racing. My shoulder has improved a lot in recent weeks but last week in Belgium I twisted my right knee and heard a crack. I thought ‘the season is finished already’. I went to the doctor and he confirmed a second-degree PCL tear. I taped the knee very hard yesterday and today and all the ruts out there were not helping. I just need to work as much as possible on the muscle to make it as stable as possible. So to be on the podium at this track and these conditions is amazing and I’m motivated again to work really hard and try to build it up. We will see what we can do next.”

Jorge Prado: “I’m a world champion so finishing 10th is not something I am used to; the last two years have been really good. But if I look at it the other way and after just two weeks of riding then I have to feel very happy about today. I didn’t have any pain and I have been working hard: this was the best I could do. I would say that last 6-7 minutes and two laps of the second moto were quite hard. The track was super-rough and I was pretty tired. I did not want to crash, and the sun was very low. First race of the season, first race with the 450 and the last time I raced was in Assen: what a weekend.”

Vialle established a big margin as leader of the opening MX2 sprint but then cased the uphill triple with almost two laps remaining and stalled the bike, losing positions. The Frenchman frantically tried to react but ended up with 6th; two places in front of teammate Rene Hofer who was part of an entertaining battle for the top five for most of the moto until the rookie slowed his pace in the closing stages and a late mistake was costly. The Austrian was eighth.

Both Vialle and Hofer made up for their mistakes in the second race: Hofer earned the holeshot and led for ten of the thirteen laps until Vialle, hunting him just behind, moved ahead and earned his very first moto victory in just his second season. Hofer’s runner-up slot placed him fifth overall as Vialle classified second behind Jago Geerts.

Tom Vialle: “I was feeling really comfortable with the bike in the first race but I made a mistake on a big jump and came too short. It was difficult to restart and I then finished sixth. The second race was better! It was tricky to pass Rene and also it started to rain a bit and I had a problem with the goggles. So I waited and then pushed hard. I won my first race and finished 2nd in the first GP of the year so I’m really happy with that.”

Rene Hofer: “Just amazing. My goal was to take two good starts and to try and ride like I do in practice. In the first moto I was 5th at the start and made my way up to 3rd and had nearly half the race there but could not make the pass on [Mathys] Boisrame and dropped back with some arm-pump. I was sixth on the last lap – and was OK with that – but made a small mistake, tipped over and lost two positions. In the second race I made the holeshot and passed Jago on the second lap. I really enjoyed the track. It is one of my favourites of the year. I almost led until the end. Anyway, it is the first GP of the year it feels incredible. I’m really happy.”

KTM 125 SX rider Liam Everts dominated the first event of the EMX125 European Championship with an undisputed 1-1 set of results. One of the motos was held in muddy and treacherous conditions on Saturday afternoon. The teenage Belgian is an early holder of the red plate in the eight-round competition.

Round Two of MXGP takes place next weekend at the Eurocircuit near Eindhoven for the Grand Prix of the Netherlands. 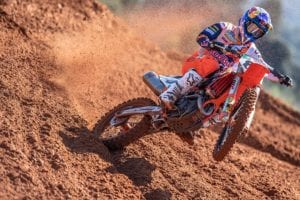 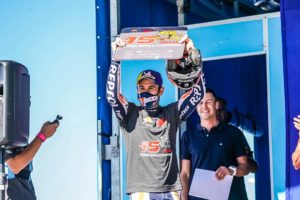 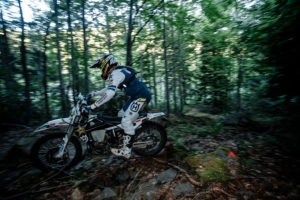 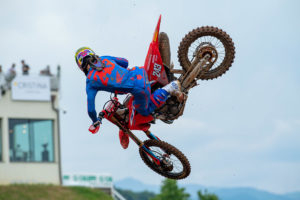