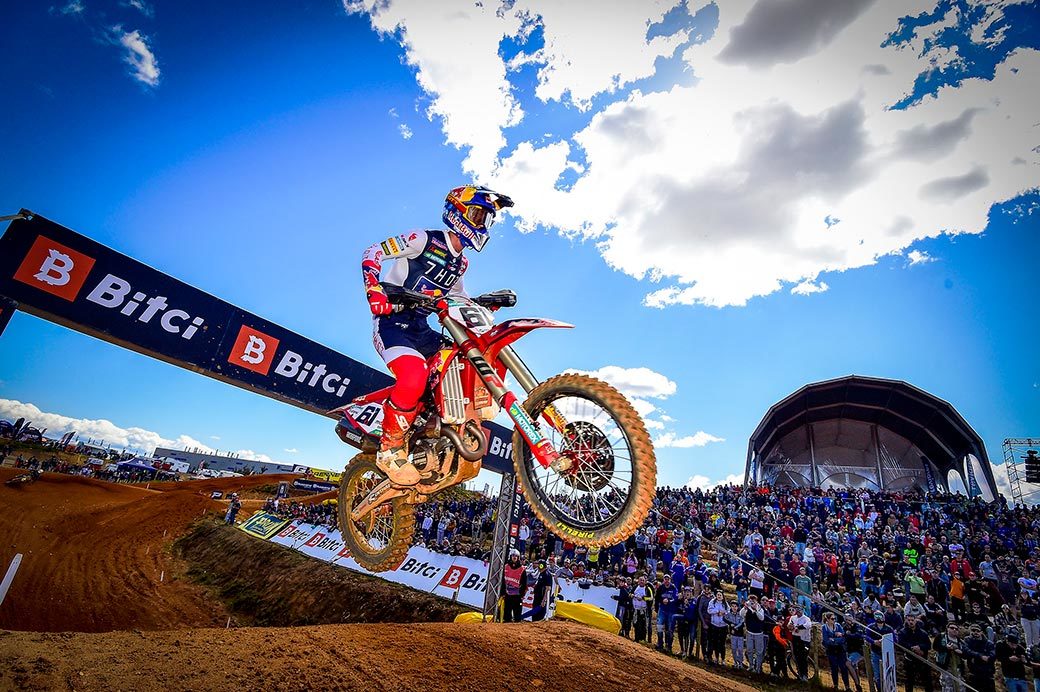 The MXGP of Portugal concluded the fourth round of the FIM Motocross World Championship after some intense battles in MXGP and MX2 that saw Red Bull GASGAS Factory Racing’s Jorge Prado celebrate his first overall victory of the season, while Red Bull KTM Factory Racing’s Tom Vialle made it two on the bounce with a back-to-back GP win in MX2.

Meanwhile, Standing Construct Husqvarna Factory Racing’s Brian Bogers made heads turn with his impressive performance just two weeks after dislocating his shoulder and to top it off, he celebrated his first MXGP podium and first trip to the box since 2017 with third overall.

Bogers was hot on Coldenhoff’s heels from the get-go and by the end of the third lap was ahead of the Yamaha rider. He then set the fastest lap of the race, setting a strong pace as he began to close the gap to Prado in first.

Meanwhile, Gajser was up in sixth but struggling to find an opportunity to get by Standing Construct Husqvarna Factory Racing’s Pauls Jonass. It took the Slovenian a total of six laps to pass the Latvian, but once he did that, it was all guns blazing as he then passed Seewer on lap 13 and then got Coldenhoff on lap 14. He fought hard to get close to Bogers, but in the end, it was not enough.

Prado went on to win the first heat, as Bogers crossed the line just 1.021 seconds behind him, with Gajser third. 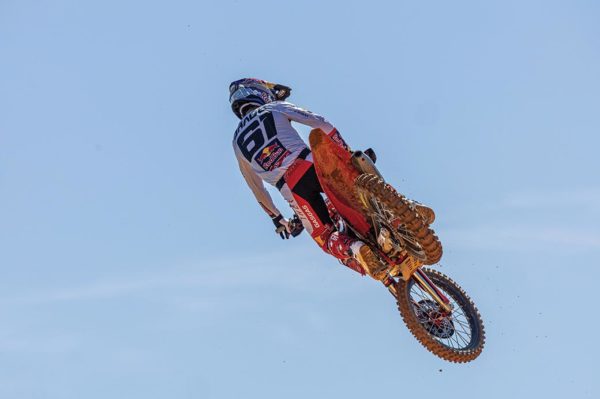 In race two, it was Prado with the Fox Holeshot that time around, as Gajser got a much better start in second ahead of Jonass, Coldenhoff and Seewer. Prado was fast and was doing a good job to keep Gajser at bay, who was keen on not repeating his mistakes from race one.

Gajser then set two consecutive fast laps as he got onto the rear wheel of the Spaniard. As they crossed the line for lap six there were just 0.729 seconds separating them as Gajser was able to dive down the inside of Prado and take over first place.

The Slovenian then pulled away as Coldenhoff pushed Jonass for third. Seewer was right there in fifth with Bogers edging closer.

Beaton started the race in sixth before being caught by Vlaanderen. Behind him a train of Honda 114 Motorsports’ Ruben Fernandez, Renaux and Forato started to form, as Renaux lost a spot to Forato and later crashed. Eventually he finished 11th.

On lap 13 Coldenhoff finally got by Jonass as Seewer dropped two positions to Bogers and Vlaanderen. Bogers then continued his charge forward and on lap 16 passed his teammate for fourth.

Not much changed in the final laps as Gajser won his fourth race of the season, with Prado second and Coldenhoff third.

A 1-2 result handed Prado his first overall win of the season, as Gajser finished second on the box ahead of Bogers who was third. After round four, Gajser continues to lead the MXGP Championship classification with 186 points, 21 ahead of Prado and Renaux who remains third.

Jorge Prado: “It’s great to get back on the top of the box. It’s hard, everybody is riding very fast and in the first races until now it was hard for me to ride like myself, always with a lot of pressure and I don’t know why. It was a long time since I won so when everything goes well, it looks like everything comes easy, the wins come one after each other, but once you get the win, I think it’s the perfect place to be in to relieve pressure. And I think this weekend will change a lot. It’s been hard, especially Argentina but I’m super happy to be here and to go 1-2 for the overall. Second race was tough, but I got the GP win”. 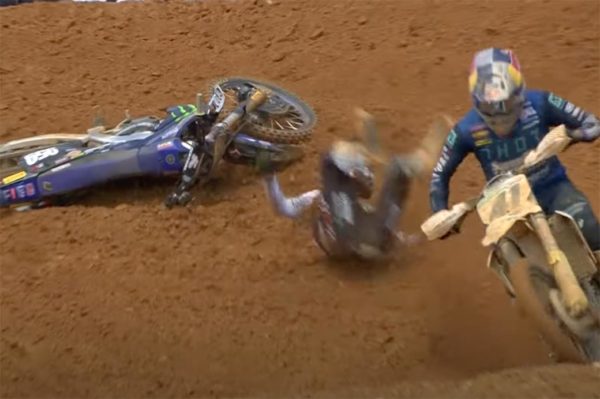 Tim Gajser: “It was a good day. The first race I didn’t have a good jump out of the gate, so I was a bit back and was struggling in the beginning to find good lines. Then about ten minutes into the race I managed to find some nice lines and make some passes, but the front two were already in a quite comfortable lead so it was really difficult to close and pass them. For the second one, I had a better start, I was behind Jorge, tried to find the lines again and then managed to make a pass and had two or three fast laps and control it, so I’m happy”.

Brian Bogers: “It’s amazing. I mean, I am speechless but the way to here was so difficult, even from 2018 when I broke my foot, I was out for nine months and to get back here was really difficult. But we are back and I am feeling good, already the first races were actually good and it’s been going better and better. Now I’m looking forward to the rest of the season”. 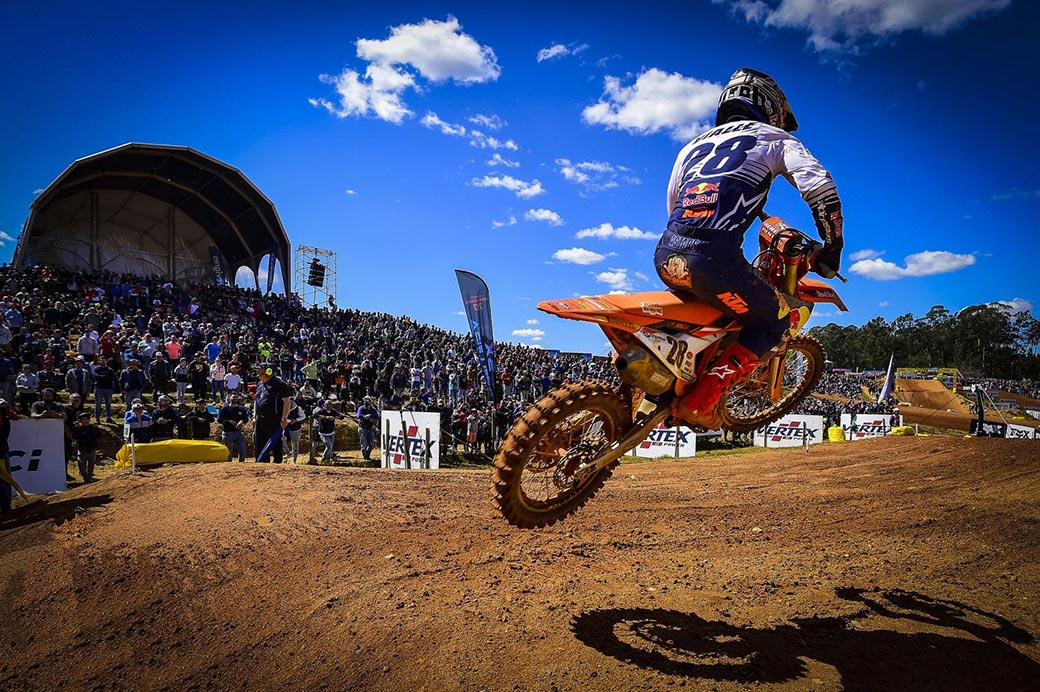 In MX2 race one, Big Van World MTX Kawasaki’s Mikkel Haarup and Red Bull GASGAS Factory Racing’s Mattia Guadagnini were out in front, but it was Haarup who got the Fox Holeshot. Though Guadagnini led very briefly before crashing in the second turn with a few other riders.

Haarup then led the way, as Vialle got by Andrea Adamo of SM Action Racing Team YUASA Battery. Geerts was looking good just behind them until he crashed big and dropped to last.

Vialle then worked to close the gap to Haarup. Though the Dane was not going to back down easily and kept the battle going for four laps before the Frenchman was able to find his way into the lead.

Conrad Mewse then found his way into third the following lap, as Geerts fought his way up the order to 16th. Haakon Fredriksen of Honda 114 Motorsports’ also had a big crash and did not finish the race.

A rider to watch in the first heat was Nestaan Husqvarna Factory Racing’s Kay de Wolf who started in around eighth. He made some nice passes in the first few laps and continue his progress through the field before catching onto Stephen Rubini of Team Ship to Cycle Honda on lap 10 and then Adamo on lap 14 and eventually Mewse on lap 16.

Haarup put up a fight until the chequered flag, but it was Vialle who won, Haarup was second and de Wolf placed third. Geerts came back to ninth behind F&H Kawasaki Racing’s Kevin Horgmo.

In race two, it was Horgmo with the Fox Holeshot as he led Hitachi KTM Fuelled by Milwaukee’s Isak Gifting, Haarup, Vialle, Geerts and Adamo. As Jeremy Sydow of Diga Procross KTM Racing Team crashed on the opening lap.

Vialle moved into second place by the end of the lap, as Geerts got by Gifting too. The Belgian then set the fastest lap of the race as Horgmo continued to lead.

The Norwegian led seven laps of the race before Vialle was able to whittle away at his lead and move into first place. Gifting then crashed as Geerts moved into second. Horgmo was pushed to third but had a comfortable gap to Haarup and de Wolf who were behind him.

Geerts though was keen on redeeming himself after the crash in race one, and on lap nine his efforts paid off as he passed Vialle and started to pull away.

In the closing stages of the race Haarup went after Horgmo who saw his third-place position at risk, though despite the Dane’s best efforts, Horgmo was able to hold firm.

Geerts ended up winning the race ahead of Vialle, Horgmo, Haarup and Guadagnini.

A 1-2 result gave Vialle the overall victory, while Haarup celebrated his second podium in a row as he took the second step of the box ahead of Geerts who was forced to settle for a third-place trophy.

Tom Vialle: “I had a difficult Saturday, I crashed in the qualifying race and was 13th on the gate which was pretty far, and the start here is not super long. First race, in the first two laps it was a little bit slippery, but I managed to win the race and I was happy with this. Second race I had an ok start, the first lap was really good for me because I passed a lot of riders and went into the lead. Jago passed me and I was struggling for a few laps, but I was happy with the second position, Jago was riding quite good, and I didn’t want to take any risks to try to push to win the second race. Second GP win of the season and I’m happy about today.

Mikkel Haarup: “We got the Fox Holeshot in the first race, and it was really nice, the first one of the season. And then I was leading for a couple of laps, but Tom passed me and I think actually it was pretty good to follow and see how it was, because it was a new situation for me, it was my first time out in front in MX2 and I learned a lot. We started to gain pace by the end of the race but didn’t manage to get the pass. But it was great, the best race for me so far this season and my career. And then second race, I made a mistake, didn’t get a good start but still managed to make some good passes and caught up to the top three guys but couldn’t find the flow to make the pass. But anyway, I was happy with my riding and the result, the best of my career so far”.

Jago Geerts: “I’m really happy about my riding today. In the first race, on the landing my handlebar slipped, and I had a pretty big crash so I needed to come from the back and still finished in ninth position, it was a little bit of damage control. And then in the second heat, I got a pretty good start and after a couple of laps found a good flow, managed to pass Tom and won the heat so, I’m really happy about my speed and the second race. I just need to try to do the same thing and keep working at it race-by-race”.