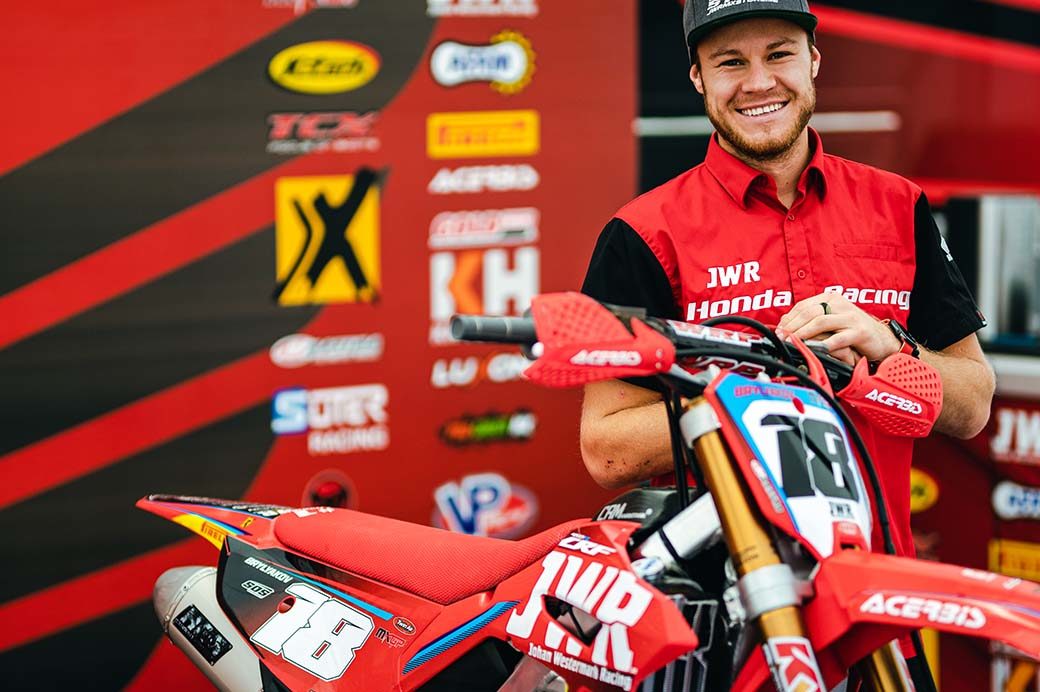 JWR Honda is pleased to announce it has secured the services of Vsevolod Brylyakov to race for the JWR HONDA/24MX Motocross team aboard the CRF450R for the next season in the Motocross World Championship.

The multiple Russian motocross Champion, known by his friends as Seva, made his comeback with the JWR Honda team in 2021. And we are happy to have him back for the 2022 season. Over the last six rounds his results have been steadily improving as he continues to gel with the team and the bike, recording his best results towards the end of the season, boosting his confidence heading to 2022. JWR is starting it’s fifth year in the MXGP, so building a team with riders like Seva and Davy as a base is a strong message that we are here to stay and take the next step in MXGP racing. Seva is back home in Russia for now to prepare, relax and enjoy time with friends, before heading back to Europe in early February for pre-season training. There are more big things coming from JWR in the near future so stay tuned for what’s to come.

Vsevolod Brylyakov: “It’s a good feeling to be sorted for 2022 and start my prep as early as possible, instead of waiting for a chance as I had to do before.
And for sure it’s a good thing to stay with the JWR Racing team, as we have a very nice group of people and great friendship inside. I know what to expect and what I’ll be working with next year. I also absolutely love how the new Honda CR450F works, especially with handling around the track.

“So I’m quite excited for 2022 and everything it will bring. I feel like we are all going to put 100% into the next season!”

Team manager Johan Westermark: “We are very satisfied and happy to sign Seva again. We like him and he is a good fit for this team and from the beginning we were confident that his results would get better and better. We would like to get in the top 10:s next season, not just with Brylyakov, but with our other riders too, and I think we have a good chance to get those results now.”

Team coordinator Patrik Erlandsson: “We are of course very pleased to sign Seva. First of all, we have seen in the races he has done so far, that he’s really a fighter and gives everything he has. He’s also very eager to learn and we will support him in every way we can so he can succeed in 2022. This is the third year on the team for Seva, so he is part of the family now, and we would like him to break in the top 10 this year. We have developed the bike more over winter to make it even more competitive for Seva, and we’re now fully prepared for 2022.”