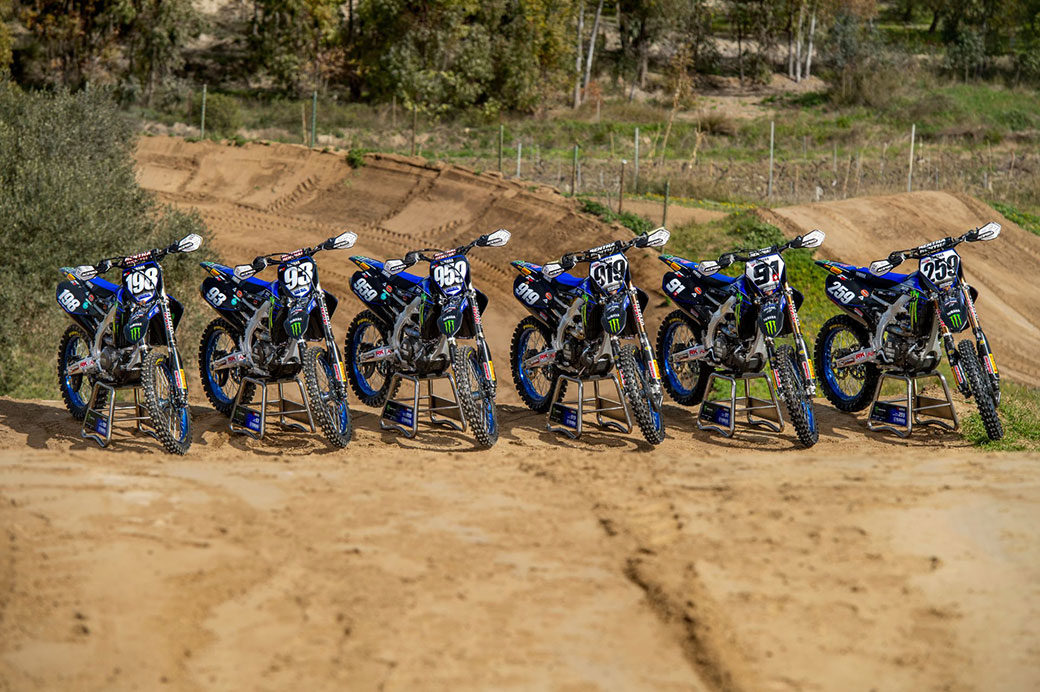 After a testing start to the 2021 MXGP season, the Monster Energy Yamaha Factory MXGP and MX2 teams have used the short break to reset and re-energise for the second round of the FIM Motocross World Championship that will take place this weekend at the spectacular Matterley Basin venue in Winchester, England.

Going into the MXGP of Great Britain, the trials and tribulations of the opening round are all in the past. All six Monster Energy Yamaha Factory riders, Jeremy Seewer, Glenn Coldenhoff, Ben Watson, Maxime Renaux, Thibault Benistant and Jago Geerts, are excited to head to the iconic British venue – a place that has been a happy hunting ground for many of them in the past.

The current world number two, Seewer, is feeling healthier and stronger as he aims to put his YZ450FM on the podium. The Swiss sensation had a solid start to his 2021 campaign, despite feeling slightly under the weather, where he managed to attain 31-points for fifth overall. In 2020, the ‘91’ finished second in the opening race at Matterley Basin and hopes to do more of the same, if not better, this weekend.

Matterley Basin was the site of Coldenhoff’s first-ever Grand Prix win – in MX2, back in 2013. That victory holds a special place in the Dutchman’s heart as he strives for more of that same success. In face of a luckless start to his 2021 crusade, the ‘259’ remains positive, knowing that the season is still long with 900-points up for grabs over the next 18 rounds. He is currently 17th in the MXGP Championship Standings.

Although the Russian Grand Prix was not the successful MXGP debut he had hoped for, the rookie, Watson, showed many signs of encouragement. Remaining optimistic, the ‘919’ is excited to line up for his second-ever Grand Prix inside the 450cc class, where he hopes to prove his true potential in front of his home crowd. The Brit from Nottinghamshire scored his first premier class point in Russia and is currently 23rd in the championship classification.

Since the opening round of the MX2 World Championship, the Monster Energy Yamaha Factory MX2 team has been working closely with Renaux and Benistant to improve the YZ250FM off the start. After testing various solutions, both riders are quietly confident they have made significant improvements to the bike and are ready to challenge the podium this weekend. Renaux is sixth in the MX2 Championship Standings after one round, while Benistant is on the cusp of the top-10 in 11th.

For Geerts, the 14-days between rounds was used as an extra opportunity to rest and rehabilitate the strained medial ligament in his left knee – an injury he sustained three weeks ago at a pre-season race in France. The 21-year-old was pleasantly surprised by the performance of the knee at the opening round, where he was able to collect enough points for 12th overall. However, he is fully aware that it is still far from full strength, and he must keep working to be stronger for the remainder of the season.

On a positive note, Matterley Basin is a memorable venue for Geerts and the Monster Energy Yamaha Factory MX2 team, as it was the scene of Geerts’ very first Grand Prix win. On that same day, the young Belgian also took the Red Plate as the MX2 Championship Leader for the first time in his budding career. That success was also the first time that Yamaha had led the MX2 World Championship since Antonio Cairoli took the red plate aboard a YZ250F at the British Grand Prix in Matterley Basin back in 2008.

A permanent fixture on the MXGP calendar since 2011, the fast and flowing Matterley Basin circuit is arguably one of the most-loved tracks on the roster. Joining the MXGP and MX2 Championships at the popular venue this weekend will be the Hutten Metaal Yamaha Official EMX250 and MJC Yamaha Official EMX125 teams as they get set to contest the opening rounds of the EMX250 and EMX125 Championships.

The Hutten Metaal Yamaha Official EMX250 team will be lining up two exciting young rookies in the form of last year’s EMX125 Champion, Andrea Bonacorsi, and Dutch prodigy Dave Kooiker. At the same time, the third of the Hutten Metaal trio, Jeremy Sydow, will not participate at the opener due to a pancreas injury that was sustained at a pre-season race in The Netherlands last weekend.

In a similar situation, the MJC Yamaha Official EMX125 team will arrive at the opener with two-thirds of the team. Title favourite, Ivano van Erp, is fit, fast and ready to challenge the crown aboard a GYTR kitted YZ125, while newcomer Ferrucio Zanchi looks forward to making his EMX125 debut. Unfortunately, Latvian mega-talent Karlis Reisulis is still recovering from a leg injury that was sustained while training in April. The 15-year-old is back on the bike but is not yet at full fitness. A decision as to whether he will participate at the next round of the series will be taken nearer the time, in conjunction with the rider and his medical team.

All classes will be operating on a one-day format. The support categories, EMX250 and EMX125, will race on Saturday, June 26, while the premier classes MXGP and MX2 will compete on Sunday 27th.

Jeremy Seewer: “I’m looking at the positives from round one, I know many things are there and that I just need to give myself time to be where I should be. But it’s a normal process under the circumstances.

“I love Matterley it’s one of my favourite tracks, it’s just how a motocross should be. The layout, the jumps, the dirt, everything it’s just awesome. In terms of my health, I feel better, and I have had some good time on the bike. I didn’t do anything too special over the past few weeks. I feel good, I want to be there challenging for the podium, taking good points.”

Glenn Coldenhoff: “I have mixed feelings after round one because I know I am riding well but the result was dramatic and very disappointing, but honestly luck was not on my side in Russia.

“The most important thing is that I felt strong, and I had a good feeling on the bike, the bike worked really well. Physically, I know I am in good condition, so this is why I have mixed feelings.

“I won my first ever GP at Matterley Basin, so I think it fits well and it suits me. Last year, it was not my best GP but still solid.

“I focused on taking some time to recover after Russia, especially as I hurt my knee pretty bad in the first race, and I would say it’s still not 100 per cent. I hope to be in the top-five. That is the goal, as Russia was not really good, I want to bounce back strong. I’m feeling fit, and happy so I am looking forward to England.”

Ben Watson: “Round one didn’t go to plan. I know it’s an incredibly long season, but I would have hoped for a better race. On the other hand, Matterley basin is a great track, the dirt it perfect and it always develops some great lines.

“We have worked on a few things since Russia but nothing crazy, I’ve been feeling great on the bike for a while, so I don’t want to let Russia change things up after just one bad day. I need to go out and get some solid points and ride like I know I can. Even if the result is nothing special, if I feel I’ve rode to my potential then I’ll be happy.”

Maxime Renaux: “I think Matterley is one of the most beautiful tracks this season and I really enjoy it. I really looking forward to ride that track. We worked with the team on the starts because we had to find solutions. I think that starts are really the most important thing for me now if I want to battle in front without taking so many risks. But I am confident, and I think we have everything to make good starts now. The goal will be to be early in front and then ride my own pace, just enjoy my ride and this is how results will come. We are definitely looking for improvements on my starts compared to Russia.”

Thibault Benistant: “I was a little disappointed after Russia because I trained so hard during the winter and I wanted a better result, but looking at the positives my speed was really good, I just need better starts. This weekend is a new GP, and a new chance to be better. Matterley is a beautiful track and one of the most fun to ride with lots of ruts and bumps. I will go to Italy before Matterley to test some new parts to help me out of the start. I look forward to seeing what we will do. The goal will be to take good starts and then see what happens.”

Jago Geerts: “At round one I got some important points for the championship despite my knee injury. At first, we thought it was not possible to race in Russia so in the end it wasn’t too bad.

“I really like the track in Matterley basin. I got my first GP win there last year so the track suits me well. The layout is very nice with some big jumps and technical corners. The last couple of weeks, I did a lot of physio and exercises to strengthen my knee. Staying active and training the muscles around my knee is the most important thing to recover fast so that’s what we did the last week.

“It feels a lot better for sure, but I’m missing a little bit of bike time from the last weeks. We will see how it goes on Sunday, I’m looking forward to line up behind the gate.”