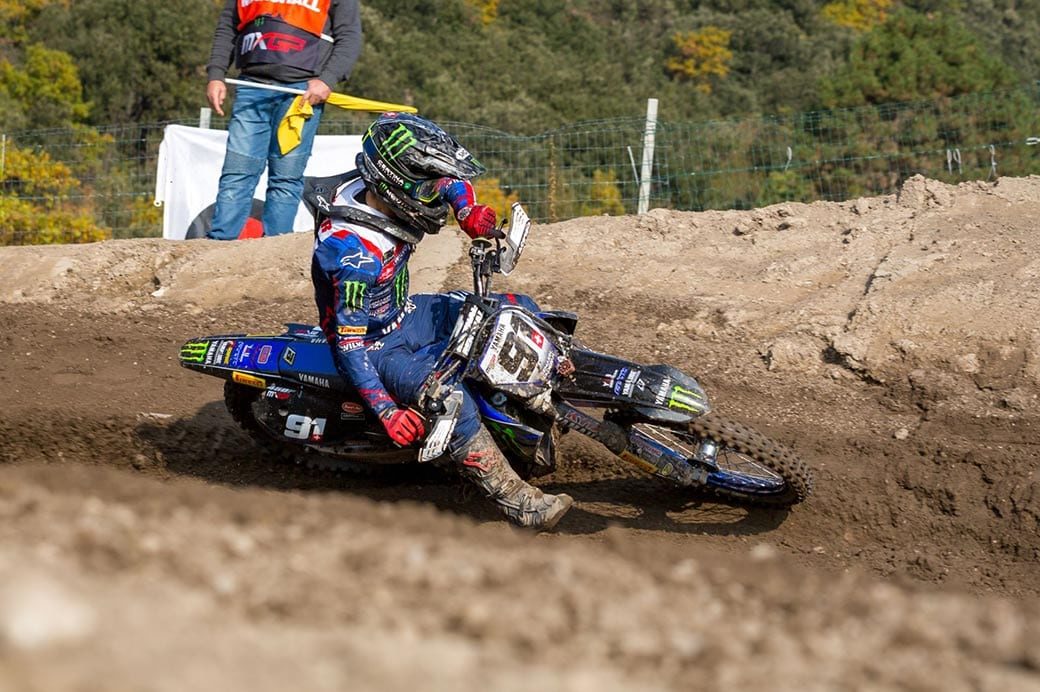 Monster Energy Yamaha Factory MXGP tackled Pietramurata for the second time today – the 17th round of the 2020 FIM Motocross World Championship was run at the same scenic venue that played host to round 16.

Jeremy Seewer continued his fight for the silver medal in the premier-class standings and strengthened his case with some phenomenal results.

Seewer started his day in the best possible fashion, as he claimed pole position for the first time this season. That served him well when gates dropped for the first moto; he used the YZ450FM power to claim the holeshot and immediately went about establishing an advantage. Seewer dealt with pressure throughout the moto but stayed strong and consistent to clinch his fourth moto win of the term. Four seconds was the advantage that he had when the chequered flag waved.

The second moto also featured bright spots for Seewer, who spent the duration following the race leaders. Third was the spot that he eventually acquired at the end of the stint – a result that left him second overall on the day. Another strong showing from the Swiss pilot aboard the YZ450FM!

The 45 points gained at the Grand Prix of Pietramurata helped him edge closer to second place in the premier-class standings too. Four measly points separate him from the position with a round to go.

Jeremy Seewer: “I got my first pole position and that felt great. I’ve been second many times in qualifying this year. It doesn’t really matter for the start – it just feels good to be on pole. After that I had an amazing first race, although hats off to Tim Gajser and congratulations to him on winning the world championship. I had some solid results today and got some important points for the championship.”

Paulin had a difficult day, so was unable to capitalise on the pace that he showcased on Sunday. A poor start in moto one forced him to fight forwards from outside of the top twenty, which he did in a swift manner. Ninth was the reward for his efforts and then a less eventful seventh in the second moto put him in eighth overall on the day. Paulin also has a chance to gain ground in the series standings at the final round on Sunday – nine points separate him from the rider in fifth.

Gautier Paulin: “It was a pretty tough day today. In the first moto, the rider next to me anticipated the start too soon and that made me move too soon for the start. Right after the gate a rider then cut across. I started from really far back after that, but I made my way back to the top ten. The riding was good, but it was difficult to make a good result after a start like that. In the second moto, we had a red flag on the first lap and hopefully the rider involved is well. After that we had to start with dirty tyres and I had a big spin on the mesh, so I didn’t start so good. It’s hard to pass on this type of track and everyone forms a train. Here it is really important to have a good start, but on the bright side the pace is good and physically I feel good.”

Arnaud Tonus continued to push forward and make progress, despite the very tight schedule that does not allow much time for recovery. Tonus had to climb from outside of the points in each moto but did so with a degree of tenacity. The second moto was particularly challenging, as a crash on the first lap meant that he had to charge up from dead last. Finishing seventeenth in that moto meant he was rewarded with some points and that result put him in fifteenth overall on the day, when paired with his fifteenth from the first moto.

Arnaud Tonus: “The day was tough. The speed is there but I struggled in the motos with bad starts, and then after that I struggled to find my rhythm and I lost too much time. I miss that racing aggression, you could say. In first moto I had a bad start and finished fifteenth and in the second moto I crashed in the first turn and don’t know where I ended up. It was just a rough day, so we will regroup for the final round.”

Monster Energy Yamaha Factory MXGP will now race to the chequered flag – the final 2020 FIM Motocross World Championship round will be run on Sunday. The Grand Prix of Garda Trentino will occur on the same Pietramurata layout.