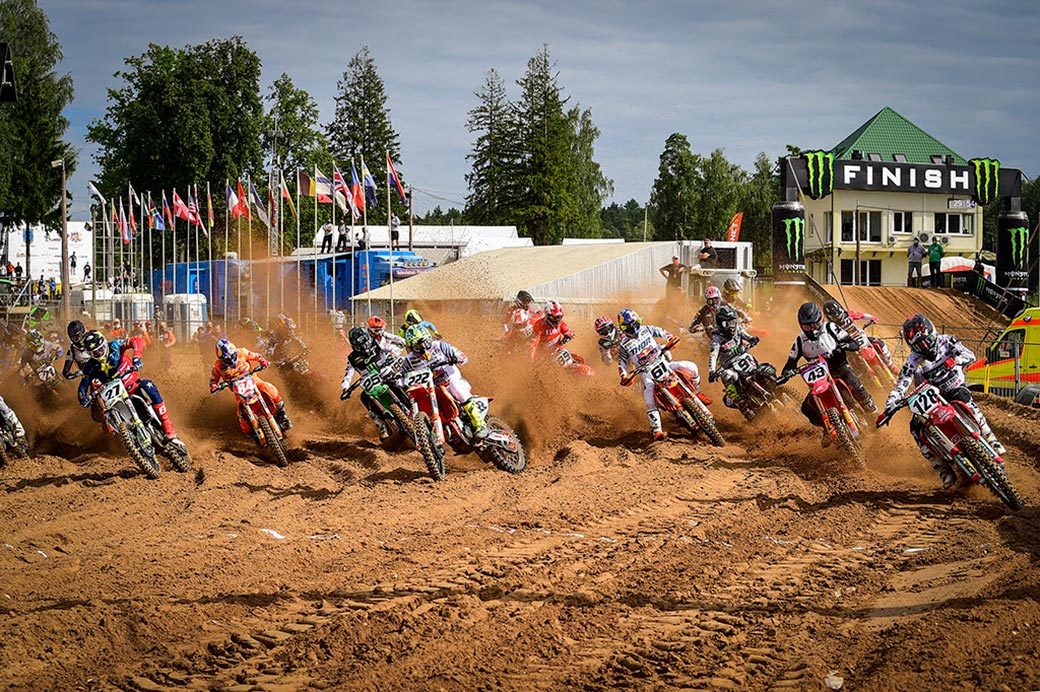 The FIM Motocross World Championship carries momentum into the seventh round of the series with the MXGP of Latvia this weekend at the technical sand circuit of Kegums.

The Latvian Grand Prix will conclude a four-week stint of races before we head into a three-week break ahead of the Turkish double-header.

Last season Kegums hosted the very first, in the history of motocross, triple-header which kick-started the 2020 season after a long break due to a worldwide lockdown. The three races were incredibly successful and saw victories from Glenn Coldenhoff, Tony Cairoli and Jeffrey Herlings in MXGP, while in MX2 it was Tom Vialle who won the first GP, while Jago Geerts dominated the last two.

The first race to take place at the Latvian venue was back in 2005 with Sven Breugelmans winning in the MX3 category, while Marcus Norlen was victorious in the 125cc class. The first official Grand Prix to be held in Kegums was in 2009, with Tony Cairoli winning the then MX1 class and Rui Goncalves victorious in MX2.

This year we return to Kegums for the 11th year, 12 counting the 2014 Monster Energy FIM Motocross of Nations, for what will be another interesting Grand Prix as things get more intense in the MXGP and MX2 championships.

This weekend’s races will also be the fourth round of the EMX250 and EMX Open Championships. In EMX250, Fantic Factory Team Maddii’s Nicholas Lapucci will look to continue his podium streak and extended his 26-point lead over SM Action YUASA Battery Racing Team’s Kevin Horgmo and TBS Coversions Racing Rick Elzinga.

In EMX Open, Davide De Bortoli enters the fourth round of six, as the championship leader over Honda SR Motoblouz rider Nicolas Dercourt who is four points behind and Simon Croci who is third a further 15 points adrift.

In MXGP, Monster Energy Kawasaki Racing Team’s Romain Febvre will enter the Latvian race with a big confidence boost from his first-ever Grand Prix victory in Lommel last weekend. Not only that, but last year Febvre got his first podium of the season in Kegums during the MXGP of Latvia on his first outing since injury, therefore big things can be expected of the Frenchman who is now second in the championship standings. Febvre has been pushing hard this season for race wins and an overall victory and in Belgium, he got both, so maybe now he will be more relaxed knowing that he had achieved these things last week and will have less pressure going forward.

While the current MXGP championship leader, Tim Gajser of Team HRC will look to bounce back after two tough races in the Czech Republic and Belgium where he lost some vital championship points. Last year’s Latvian triple-header was also not the easiest for the Slovenian who suffered two DNF’s, but hopefully, this time around will be different, and he will be able to pick himself up and get back to winning ways.

Red Bull KTM Factory Racing’s Tony Cairoli will no doubt be looking to get himself back on the podium in Latvia after breaking his four GP podium streak in Lommel. Last year Cairoli won the second of the three events in Kegums, so clearly, he has what it takes to win races on the hard sand circuit. His teammate Jorge Prado will also be pushing for another podium finish after a fourth-place finish in Belgium, as Jeffrey Herlings will continue his shock return to racing and no doubt will deliver some more impressive results, after a race victory in Lommel just two weeks after breaking his shoulder blade.

While the Monster Energy Yamaha Factory Racing MXGP riders will no doubt gather in force as they will look to put the unlucky Belgian Grand Prix behind them. For Glenn Coldenhoff the MXGP of Latvia holds some special memories as back in 2015 he secured his first ever MXGP race and overall wins, while last season he added to that giving GasGas their first overall victory in MXGP, as he was victorious at the first event of three. Meanwhile, Jeremy Seewer will look to take back some points and get back into contention after a slow start to his 2021 campaign, as Ben Watson continues to adapt to the competitive class and hope for more strong finishes inside the top 10.

This weekend will be special for Standing Construct GasGas Factory Racing’s Pauls Jonas who will head into his home Grand Prix following his first podium finish a week earlier in Belgium. Jonass has been looking strong this season so far and it was only a matter of time before we were going to see him on the podium as he consistently pushed inside the top five and thereabouts. With his first podium of the 2021 season under his belt, let’s see if he can do this on home soil or even win in Kegums for the first time ever.

For Rockstar Energy Husqvarna Factory Racing’s Arminas Jasikonis the Latvian race is the closest thing to a home GP, with Lithuanian fans always making the short trip across the border to support the tall Lithuanian. Jasikonis continues his comeback from a traumatic brain injury and has shown some great results this season so far, with some top 10 finishes. Last season Jasikonis won his first-ever GP race in Kegums, so let’s see if he can deliver some more top results this time around.

In MX2, Monster Energy Yamaha Factory Racing’s Maxime Renaux continues to lead the championship with a healthy 26-point advantage over Red Bull KTM Factory Racing’s Mattia Guadagnini. Renaux had a solid weekend in Belgium going 2-3 for third overall, while Guadagnini’s weekend was difficult. The Italian 14-10 after a nasty start crash in race one, with the rest of the weekend snowballing from there.

This weekend Renaux will aim for another good weekend with consistent results to extend his lead, while Guadagnini will want to put the troubles of Lommel behind him and collect some vital championship points in Kegums as he’s got Honda 114 Motorsports Ruben Fernandez breathing down his neck in the standings as he is just one point adrift of the Italian. Fernandez finished 6th overall in Belgium and has not been on the podium since Matterley Basin, so he is well overdue for some strong races.

Also edging closer in the championship is Monster Energy Yamaha Factory Racing’s Jago Geerts who had a stellar weekend at his home race last weekend. He went 1-2 to take the overall win and make up for lost ground last season during the Belgian triple-header. Those 47 points that he picked up in Lommel have done wonders for his title chase as he moves to fourth in the standings and just two points from second place. This weekend the Belgian will no doubt be looking for some more solid points to get back into title contention as he was one of the favourites to win as we entered the season.

F&H Kawasaki Racing’s Mathys Boisrame is another rider to look out for in Latvia as he will want to bounce back from Lommel and get back on the podium. Last season in Latvia, the Frenchman got two consecutive podiums, as he was third overall in the first two GP’s therefore, he is one of the favourites for the weekend, meanwhile his teammate Roan Van De Moosdijk who also had a strong run in Kegums last year will miss out on the Latvian race due to injury.

Rockstar Energy Husqvarna Factory Racing’s Kay De Wolf will continue his successful rookie season after his race win and second overall in Lommel, as he will enter the Latvian GP more confident than ever. The young Dutchman has had some good races with his teammate, Jed Beaton, with the pair often running inside the top five and top 10 and it would be good to see both on the podium again, as De Wolf finished on the podium in Latvia last season in the EMX250 class.

Of course, this weekend we will also see Red Bull KTM Factory Racing’s Tom Vialle continue his return to racing after finishing seventh overall in Lommel, with P4 in race 1. It is clear that Vialle is still getting back up to speed, but he is already running well with the leaders and just needs two consistent races. Meanwhile his teammate Rene Hofer has also had some good races this season and will hope to continue this run and hopefully battle inside the top five again this weekend.