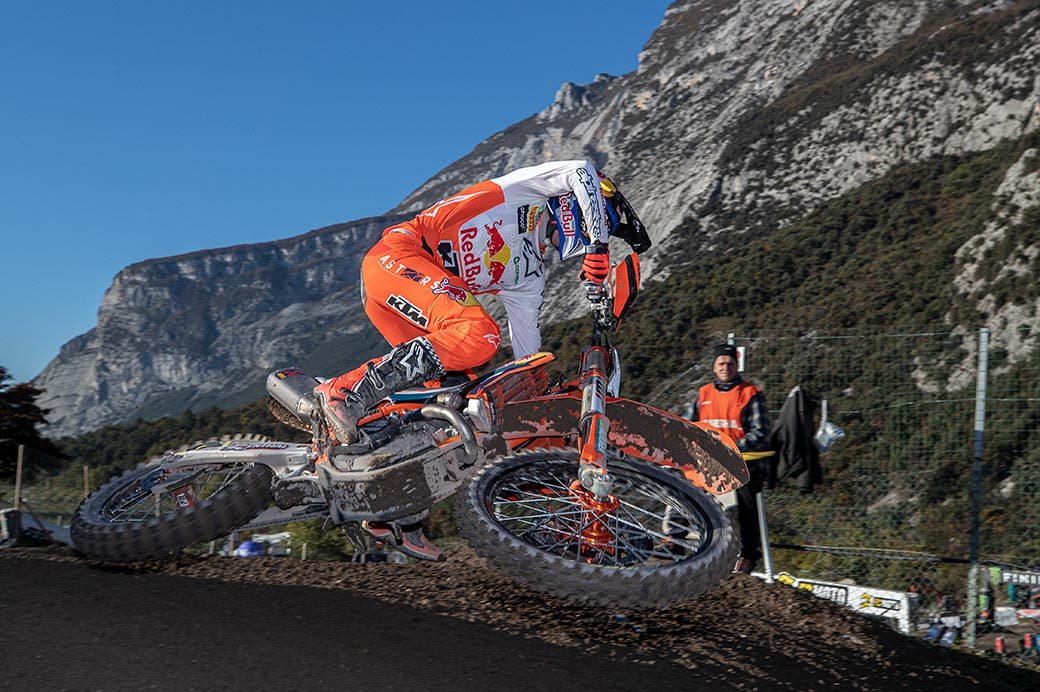 The FIM Motocross World Championship continues this weekend with the fifth round of the series nestled in the stunning Dolomite Mountains of Pietramurata for the MXGP of Trentino.

The Pietramurata venue made its first appearance in the FIM Motocross World Championship back in 1987, with the inaugural Grand Prix won by Massimo Contini in the 125cc category. Since then, the hard-pack circuit has hosted 16 Grand Prix races, which also includes several triple headers in 2020 and 2021.

As it stands, Tony Cairoli and Jeffrey Herlings of Red Bull KTM Factory Racing are the most successful riders at the Pietramurata venue, with five GP victories each. Though with Cairoli retired and Herlings out with injury, this leaves the door open for Team HRC’s Tim Gajser to level up with the pair, as he sits second with four overall wins.

This weekend, the MXGP of Trentino will be the perfect setting for a great weekend of racing, with a brand-new track layout ready to test the riders. The Crossodromo “il Ciclamino” will run in a different direction this weekend, with minor changes to accommodate the modification, while the essence of the circuit will remain the same.

Alongside the regular MXGP and MX2 action, we will also see rounds of the EMX125 Presented by FMF Racing and EMX Open taking place on Saturday and Sunday. 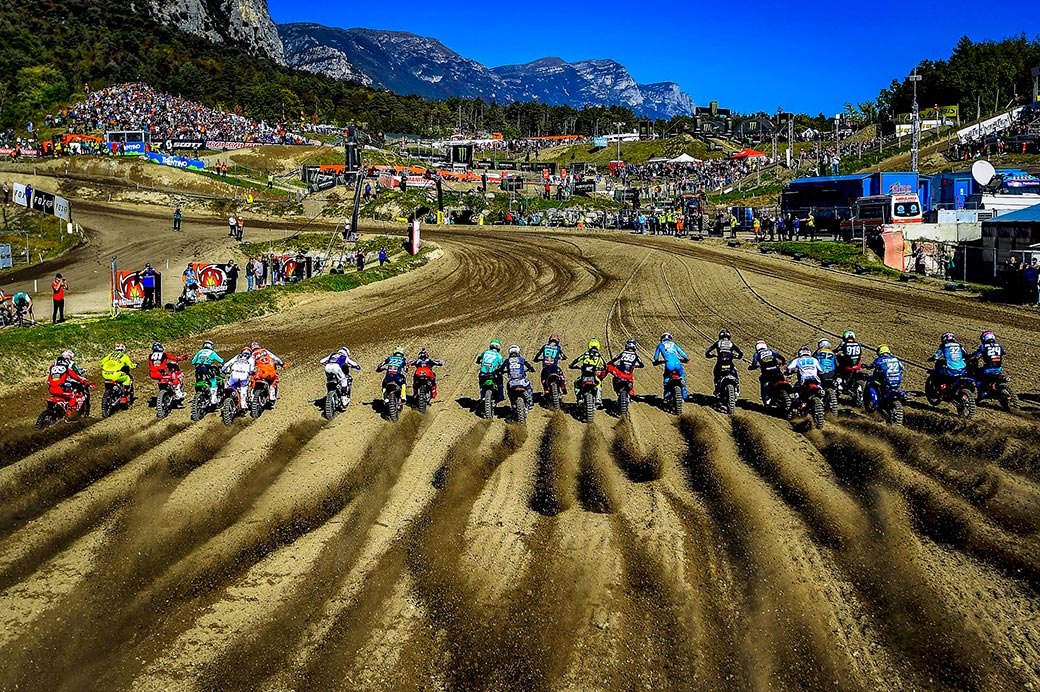 What will be interesting to see in MXGP this weekend is whether after breaking Gajser’s winning streak in Portugal Red Bull GasGas Factory Racing’s Jorge Prado can start his very own string of victories. Prado admitted that he has been riding with pressure, but now with his first GP win since Loket last year, finally off his back, maybe that will give him the much-needed boost to carry on with this momentum and ride like his usual self.

Though Gajser has been very strong this season so far, winning three GPs on the bounce, one weekend without the GP victory doesn’t rule him out straight away. Pietramurata is a good track for the Slovenian, with the added bonus of his home fans and the famous ‘Gajser corner’ which will no doubt give him an extra push during the races.

But of course, there seems to be a growing threat from the likes of Standing Construct Husqvarna Factory Racing’s Brian Bogers and Pauls Jonass who had a very good weekend in Portugal. No doubt the standout performance goes to Bogers, who after dislocating his shoulder in Argentina just two weeks prior, fought back to a podium position for his first-ever visit to the box in MXGP and his first podium in general since 2017. It would be nice to see him carry this momentum and motivation into the rest of the season.

There’s also the Monster Energy Yamaha Factory Racing squad to watch out for. Glenn Coldenhoff had a really positive weekend in Agueda, after winning the qualifying race, the Dutchman had a solid scorecard in the races, going 4-3 for fourth overall, just two points off the podium. Coldenhoff has admitted he has struggled with severe arm pump in the first rounds and is looking to put this behind him and focus on the positive results.

Meanwhile, his teammates, Maxime Renaux and Jeremy Seewer have also had their share of ups and downs. After winning his first MXGP race, Renaux didn’t seem his usual self in Portugal as he struggled with crashes and could only manage 11th overall. But Trentino is a special place for him, a track where he secured his first world title just last season, so there’s no doubt that he will be fired up for the weekend and keen to make up for last weekend.

Seewer also has his own success in Trentino, having won the Grand Prix there last year, his second in MXGP. While the Swiss hopes for another podium finish, he is also realistic having already made huge steps since Argentina where he picked up a concussion. It was not clear whether he would even start his 150th GP in Portugal, so having delivered a solid result of sixth overall and a few more days rest, it will be interesting to see what he can do this time around.

Honda 114 Motorsports Ruben Fernandez was another rider to watch last weekend, but that didn’t quite go to plan for the Spaniard. Fernandez posted the fastest time in free and time practice but that did not translate into a good qualifying as he crashed twice, the latter one being the one that left him worse for wear. He did however line up for the Sunday races, though eighth overall was the best he could deliver. It is clear that his speed is there and hopefully that can translate into a good race too all he needs is the experience and time and now returning to a place where he was on the podium in MX2 last year, should give him an extra bit of motivation too.

Heading into the weekend, focus will be also on the Italian riders, such as Alberto Forato of SM Action Racing Team YUASA Battery and Nicholas Lapucci of Fantic Factory Team Maddii to see what they can do on home soil. Meanwhile, Beta SDM Corse rider Alessandro Lupino will miss his home round due to surgery in Portugal last week. 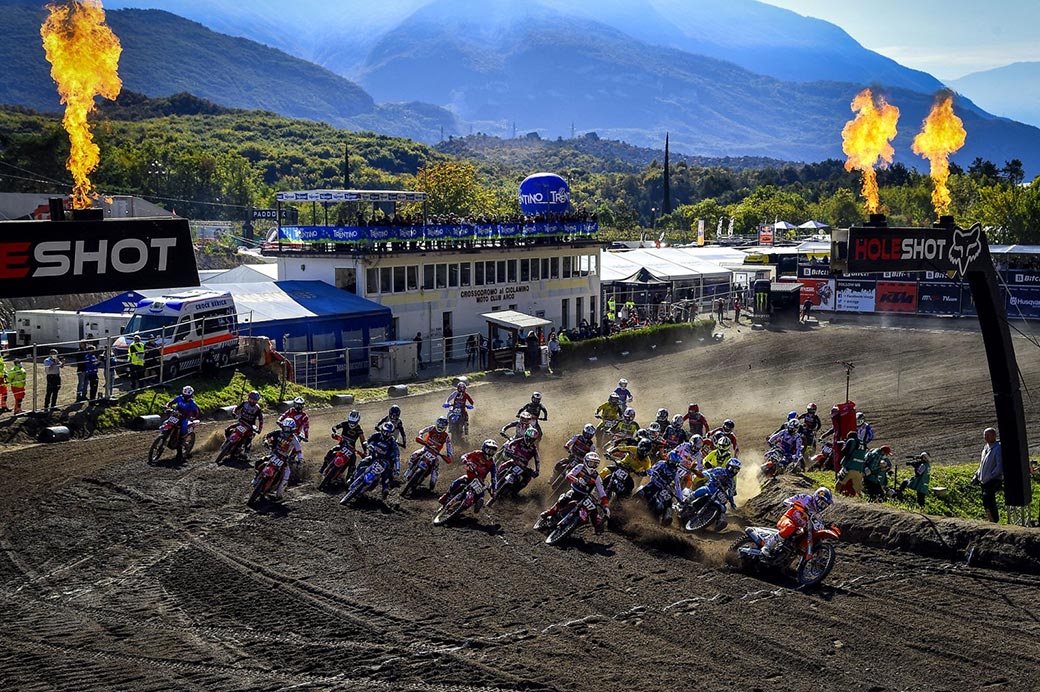 In MX2, all eyes will be on Red Bull KTM Factory Racing’s Tom Vialle who secured a back-to-back GP victory in Portugal with a 1-2 result over Monster Energy Yamaha Factory Racing’s Jago Geerts. Coming into this race weekend in Trentino, both riders have the chance to win the GP, having both won there previously. It will be interesting to see if the memories of securing a world title will give Vialle an extra edge or whether Geerts will be able to bounce back and get back on the top spot to maintain a steady championship lead.

While many expect the fight to be between Vialle and Geerts, it’s also important not to rule out other potential threats in the likes of Big Van World MTX Kawasaki’s Mikkel Haarup or Nestaan Husqvarna Factory Racing’s Kay de Wolf for example.

Haarup has been on a high in these last two GPs having scored two podiums on the bounce for his best career result. Haarup has what it takes to win, but his lack of experience at the front could be a factor, though he admitted himself that leading in Portugal has already taught him a lot. Nonetheless, it will be interesting to see whether the Dane can continue this form into the fifth round as he currently sits third in the championship.

Husqvarna’s de Wolf is another rider capable of getting on the box. At the MXGP of Patagonia-Argentina, it seemed like the Dutchman could be another name to add to the injured list in 2022, but his surprise return in Portugal really caught attention. A 3-5 result put him very close to the podium and there’s nothing to stop him from doing it again in Trentino this weekend.

Just a further two points behind was F&H Kawasaki Racing’s Kevin Horgmo who finished his weekend with 33 points and a Fox Holeshot. Horgmo has consistently battled at the sharp end and after finishing fifth overall in Portugal, he keeps edging closer to a podium every weekend. Last year, Horgmo went 2-1 to win the EMX250 round in Trentino, so he has what it takes to lead laps and win there.

Monster Energy Yamaha Factory Racing’s Thibault Benistant made his comeback last weekend and finished his first 2022 GP with seventh overall. It’s a solid building point for the Frenchman and hopefully, we see him improve race by race.

Red Bull GasGas Factory Racing’s Mattia Guadagnini and Simon Längenfelder will need a positive result this weekend after a couple of tough races. Guadagnini looked solid out of the gate in race one, though crashed in the second corner, which didn’t set the best tone for the day. He was able to fight back to 12th and finish fifth in race two but will need a more positive result to stay in the running of a good overall result this season. Längenfelder had troubles of his own managing a 13-9 scorecard which he will no doubt look to improve also.

Local faces to look out for this weekend will be SM Action Racing Team YUASA Battery’s Andrea Adamo who will be looking to get back on the box after his first podium in Mantova last month, along with Andrea Bonacorsi of Hutten Metaal Yamaha Racing Team who will make another wildcard appearance in MX2.