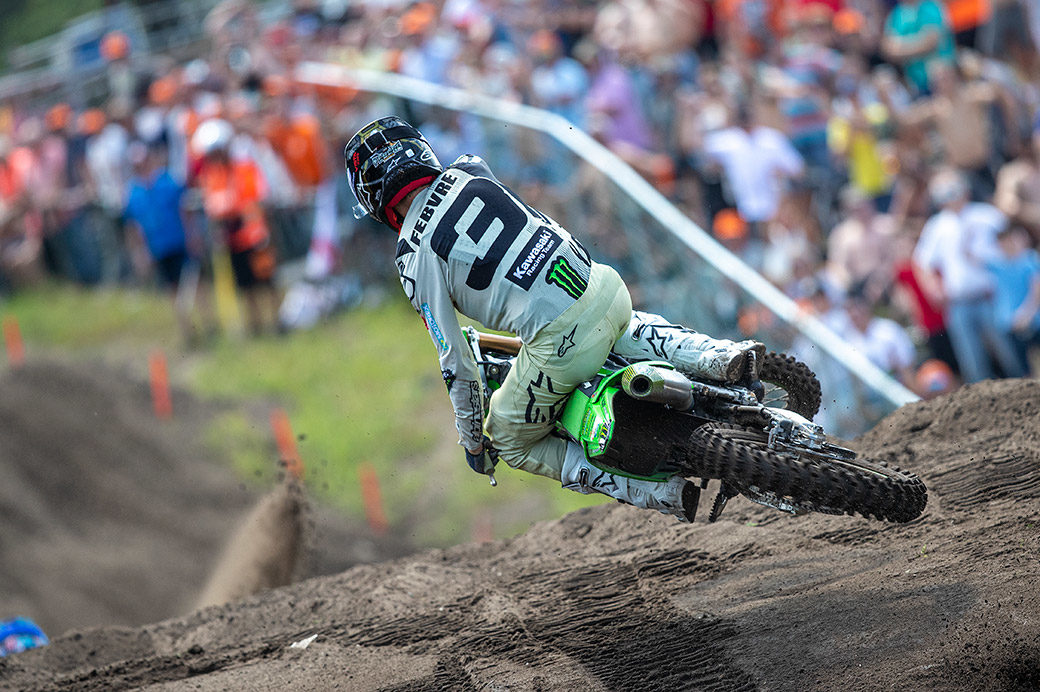 Romain Febvre of the Monster Energy Kawasaki Racing Team put setbacks behind him to mount the podium in the Dutch round of the FIM World MXGP Motocross Championship at Oss.

The first moto, in which Febvre set the fastest lap, was a classic as the top four riders in the world fought a furiously battle for supremacy around the rugged natural sand track in the south of the country. Romain took the holeshot award – his third of the season – before running wide into deep dirt at turn two. The Frenchman remained unruffled to retain second on the uphill exit from the turn and there followed a titanic duel for the lead with home-town rider Glenn Coldenhoff in which the local hero resisted numerous challenges from the Kawasaki leader as the persistent Frenchman sought a way past time-and-again.

A slip at half-distance temporarily dropped Febvre to third but he immediately responded to repass the defending world champion and once more close down the leader before the front wheel buried itself in a deep berm as he sought a passing move. Such was the proximity of the leading four that the incident dropped him to fourth at the chequered flag. The second race was equally enthralling as the Frenchman again moved immediately to second but he was dramatically thrown into the trackside fence off a gnarly jump.

Rejoining the race seventh he charged until the chequered flag, consistently setting faster laps than the eventual winner, to narrowly miss third in the moto but fourth was sufficient to claim third on the podium. He is now fourth in the series points standings on the same score as the rider in second.

Romain Febvre: “I feel that should have been my GP; I took two good starts – a holeshot and a second – and I had the speed but a few mistakes cost me. I got the holeshot in race one but went too wide into soft dirt at turn two. I was fast but Hoff blocked my every attack. I have learnt to take my time but the pass didn’t happen and in the end I slipped off two times. The second race was the same story when I crashed looking for a pass for the lead again; I made a mistake coming down the hill and almost jumped into the fence. I got up fast but the pace was hot and I again had to settle for fourth. Still, I was on the podium again and now I expect the win in the next GP at Loket where I won in 2019.”

KRT teammate Ivo Monticelli experienced another dramatic GP. The Italian sprinted clear of the pack entering the first turn of race one but ran wide into the fence to surrender the lead. Then on the uphill jump he crashed spectacularly when the rider just ahead of him suffered a technical problem which caused him to jump short; the Kawasaki rider, already fully committed to the jump, was not at fault but the collision relegated him to the rear of the field before putting in a determined ride to finish 18th. He was again unfortunate at the start of race two as another rider fell in his path entering turn two and he ran into deep mud on the outside of the corner to avoid the fallen rider. He advanced to eleventh by the chequered flag from twentieth on the opening lap. 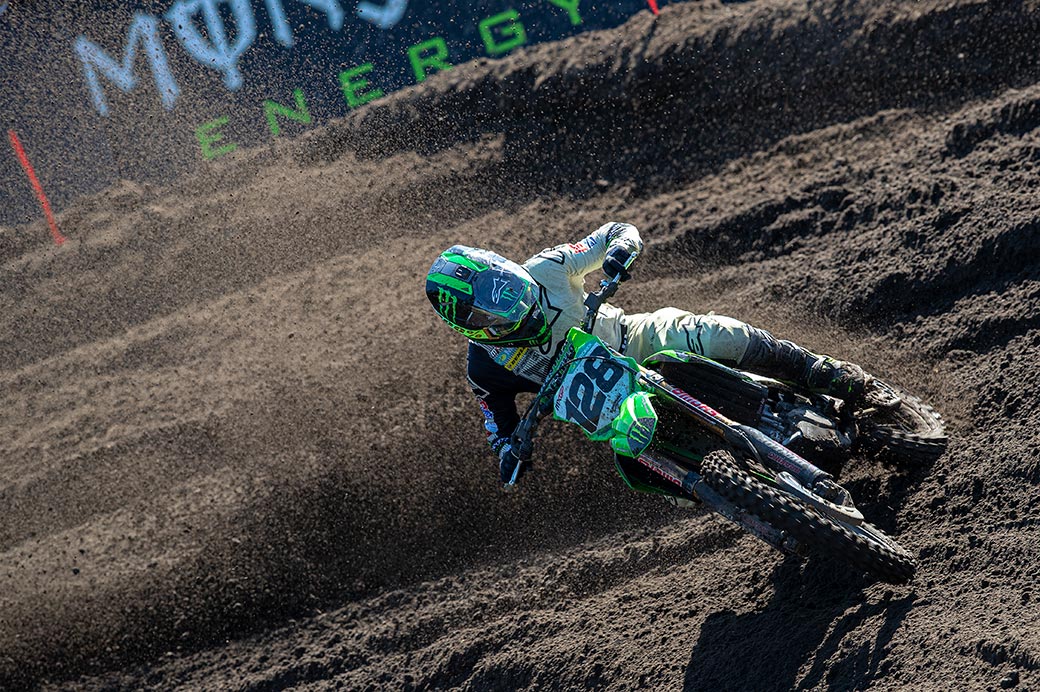 Ivo Monticelli: “Everyone always tries to push on the first lap. I arrived at the uphill jump and Jeffrey jumped short. I was already in the air and couldn’t miss him. I’m OK. I am so sorry for Jeffrey but this is our sport. The bike was damaged but I got back up after everyone else had gone past and found a good rhythm to finish 18th. My start was okay in the second race too but Hoff crashed in front of me at the second turn and I went out into the deep mud on the outside of the turn to avoid him. I was twentieth but I came back,to 10th before Seewer passed me a few laps from the end. I rode two good motos with no mistakes and good speed today so I am confident for the future. 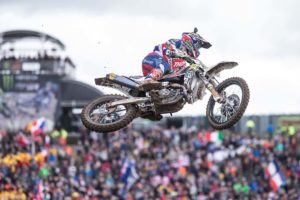