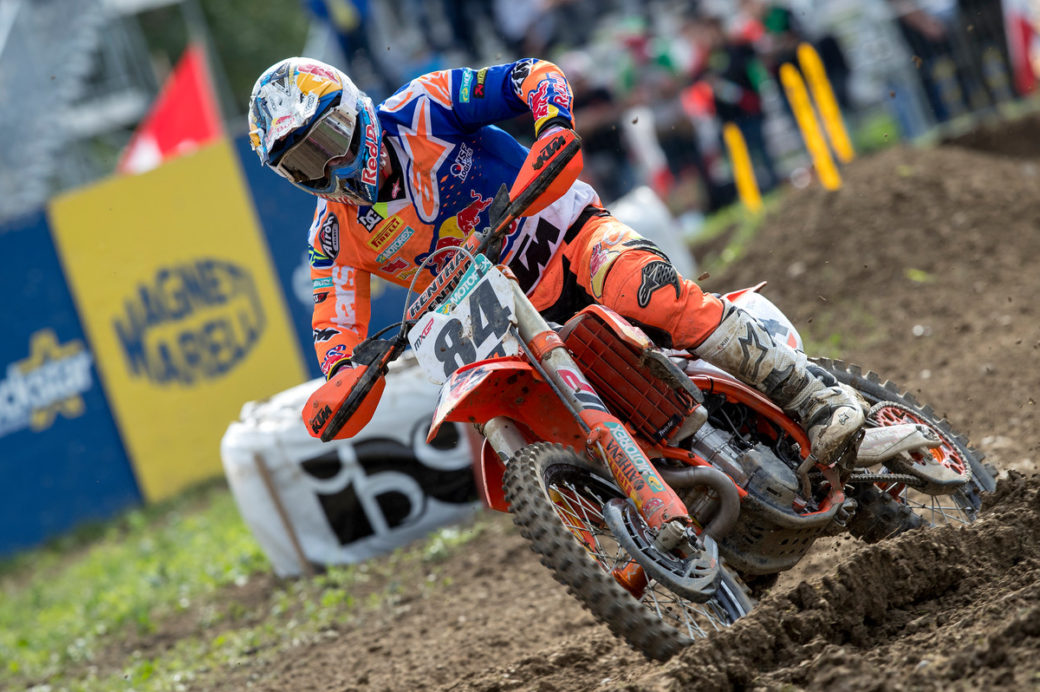 Red Bull KTM Factory Racing’s Jeffrey Herlings came into the weekend with a win on the Lommel sands and he was hoping for another in Switzerland.

In race 1 it looked as if his dreams would not turn into reality when he started near 15th position. One lap in he made his way up to 10 and from there he continued charging.

At the front of the field it was Wilvo Yamaha MXGP’s Arnaud Tonus leading his home GP. Tonus took the lead on the first few turns from the #99 FOX Holeshot winner, Rockstar Energy Husqvarna Factory Racing’s Max Anstie.

Anstie made several attempts to pass Tonus throughout the 16 lap race but the Brit never found a way past. In third and fourth it was the French riders of Rockstar Energy Husqvarna Factory Racing’s Gautier Paulin and Monster Energy Yamaha Factory MXGP’s Romain Febvre.

Febvre hounded the back tire of Paulin and on lap 8 made it by but it was short lived as he stalled his Yamaha and took time restarting the machine. The error allowed Red Bull KTM Factory Racing’s Antonio Cairoli into third right after he’d passed Paulin.

Back at the front Tonus responded to the challenge and he won his first ever MXGP race ahead of Anstie, Cairoli, Paulin, and Febvre while Herlings finished 6th.

In race 2 Tonus and Herlings switched roles with Tonus around 18th and Herlings in the lead after a Cairoli FOX Holeshot. Cairoli also lost a spot to Paulin and he was passed by Febvre in the early portion of the race.

While Herlings started to check out from the field Tonus was fighting his way through it. Tonus fell on the tunnel jump prior to the finish and at first he was unscathed by whilst trying to return to his bike was hit by Suzuki World MXGP’s Arminas Jasikonis send both riders tumbling.

Jasikonis remounted but Tonus walked of the track unable to finish in a disappointing end to his weekend.

The front four stayed in the same order to the finish with Herlings winning, Paulin second and Febvre third after a Cairoli charge came up short. Team HRC’s Tim Gajser took the final spot in the race 2 top 5.

Cairoli in the press conference said: “I rode a little bit to careful in the beginning of the race so I’m not happy with my second race but I am happy about the overall GP, to be on the podium is always good.”

The overall win was taken by Herlings but only gave him a 2 point gain on Cairoli in the championship. Herlings in the press conference stated: “In the first race I messed up the start…so I worked from 15th up to 6th but the guys in 10th place shouldn’t be underestimated, they are still going fast and have won GP’s. I am very very happy and I hope to keep this rhythm going.”

Paulin’s 4-2 gave him second overall and his first visit to the podium since Russia. Paulin in the press conference said: “I’m back getting good starts, back more or less in good shape, so I’m looking forward to next races. Being on the box is great for the team and it is back where we need to be.”

Suzuki World MX2’s Jeremy Seewer is the hometown hero and he didn’t disappoint his fans this weekend. In race 1 Seewer was around 4th off the start with his title rival, Red Bull KTM Factory Racing’s Pauls Jonass ahead of him.

Taking another Fox Holeshot was Red Bull KTM Factory Racing’s Jorge Prado Garcia. Seewer had the cheers of the crowd motivate him to pass Jonass which he did 4 laps into the race.

Three laps later Seewer then passed Prado to take the lead and from there he charged on. Kemea Yamaha Official MX Team’s Benoit Paturel rallied his way into second and on the final lap caught Seewer.

Seewer made a mistake out of a corner which allowed Paturel to get right next to him and apply pressure. Seewer noticeably tensed up but still took the win only 6 tenths of a second ahead of Paturel.

Race 2 couldn’t have started worse for Seewer when he hit the back wheel of Prado and went down in the first corner. Prado took the holeshot Jonass was right in tow as Seewer was left collecting and restarting his Suzuki from dead last position.

Jonass then took the lead from Prado but fell shortly after dropping to 5th and giving the lead back to his teammate. Only a lap later it was Prado who fell and gave the lead away.

Capitalising on the KTM rider’s mistakes was Rockstar Energy Husqvarna Factory Racing’s Thomas Covington. Covington led for 5 laps before the determined Paturel found a way by the American.

Meanwhile Jonass worked his way back into the top through and past his teammate. The real story however was Jeremy Seewer coming back through the field in a valiant effort. Seewer made it all the way to 5th at the finish giving him second overall. Seewer later said: “It is just amazing what happened this weekend, I think that with the whole history of motorsports in Switzerland this is a new level with all the crowd and the fans. It is a tough moment but still we are looking to forward to the next GPs.”

Winning his race two and his first ever overall was Benoit Paturel in what is his final MX2 season. Paturel in the press conference said: “I have been waiting a long time for this win and today it was my day. It is really good for me and for all my team, we have worked really hard for this. Today is a really good day and I am really happy about it.”

Jonass took third overall, in the press conference stated: “I was a little off of the pace but at the end of the day we only lost one point in the championship. We got on the podium and the most important thing is to stay consistent.”