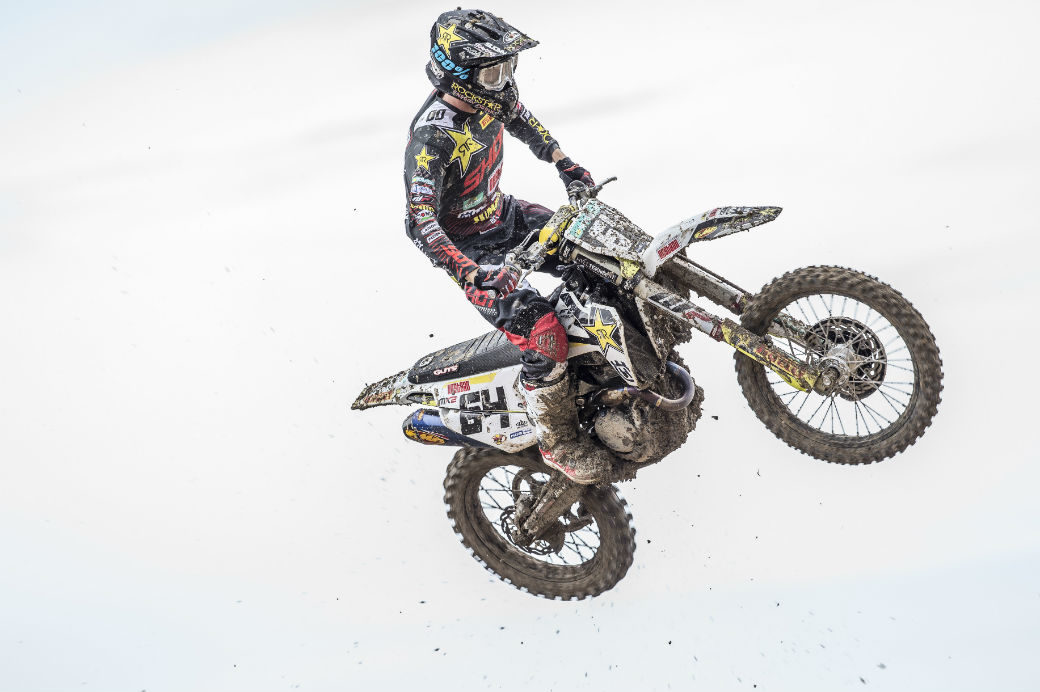 Claiming an impressive flag-to-flag victory in the opening moto, Thomas Covington has finished as overall runner-up in the MX2 class at the GP of Indonesia. Earning his third consecutive podium result, the Rockstar Energy Husqvarna Factory Racing rider got the holeshot in the opening moto before securing the chequered flag.

Made to work harder in the second moto, Covington battled his way forward for an eventual fourth-place result.

Returning to the Pangkal Pinang track, this year’s MXGP of Indonesia was made all the more challenging due to torrential rain during the days leading up to the event. With riders faced with a muddy track during the Qualifying Races on Saturday, conditions thankfully improved for the final motos on Sunday. Securing fourth in the MX2 Qualifying moto, Thomas Covington was eager to impress in Sunday’s all-important races.

I need to work on my second moto performances – Covington

With his FC 250 powering the American to an impressive holeshot in the first moto, Covington never looked back. Earning a start-to-finish win, the American lined up for the second moto with his eyes set on the overall victory. Frustratingly, not getting a good start in moto two, Thomas was forced to come through the pack to eventually cross the line in fourth place.

Battling his way through the pack following less than ideal starts, Max Anstie earned eighth overall in the MXGP category. Making a lot of passes during the two final motos, the Brit is positive for some improved results going into the second GP on Indonesian soil this coming weekend.

What the Husqvarna Factory riders said

Thomas Covington: “Everything worked well for me in the opening moto. I got the holeshot and did my own race for the win. As for the second moto, my start wasn’t perfect and I had to dig deep to get up front. Once again we showed the overall victory was well within our reach and I’m a little bit disappointed for finishing second overall for the third time in a row. I am happy with where I’m at in terms of my speed and stamina and I need to work on my second moto performances. I can’t thank enough my team for their great support and I am looking forward to the following GP here in Indonesia.”

Thomas Kjer-Olsen: “My starts were good in both motos and I could run with the guys up front. The speed was there but I had one crash in each moto and that made things a lot harder. I struggled to find a good race pace after the crashes and that had me settle for fifth in the first moto and ninth in the last one. Obviously, I was looking for more coming into this GP but I am happy I am still in one piece after another tough weekend. Our eyes are set now on next weekend’s GP here in Indonesia.”

Gautier Paulin: “I started the weekend getting fourth in qualifying and overall I had a good feeling going into the final motos. In the opening race I got off to a good start but a few small mistakes made me drop a few spots for sixth at the flag. My start wasn’t that good in the second moto, but I pushed even harder to make up some ground. Conditions were treacherous and the harder you pushed you increased the chances of making a mistake. I struggled to get some consistent lap times in these conditions. To be honest I was expecting more coming into this GP. We move on from that and now it’s on to the following GP here in Indonesia this coming weekend.”

Max Anstie: “Everything was going well for me and I knew I could battle for some good results here in Indonesia. I was running fifth in the Qualifying moto, but a crash forced me to cross the line in 12th. Not having a good gate pick for the final motos made it all harder for me. There were just a few good lines after the start and everything else was covered in deep mud. My starts were good, but then I had to go through big puddles of mud before entering the first corner. Despite not placing myself in good positions after the start, I did everything I could to get back up front. Things were a little better in the second moto and overall I could enjoy a better race for sixth at the chequered flag. We take the positives out of this GP and I’m happy with my speed at the moment.”

The Rockstar Energy Husqvarna Factory Racing team will return to action at the 12th round of the 2018 FIM Motocross World Championship in Indonesia on June 30 – July 1.