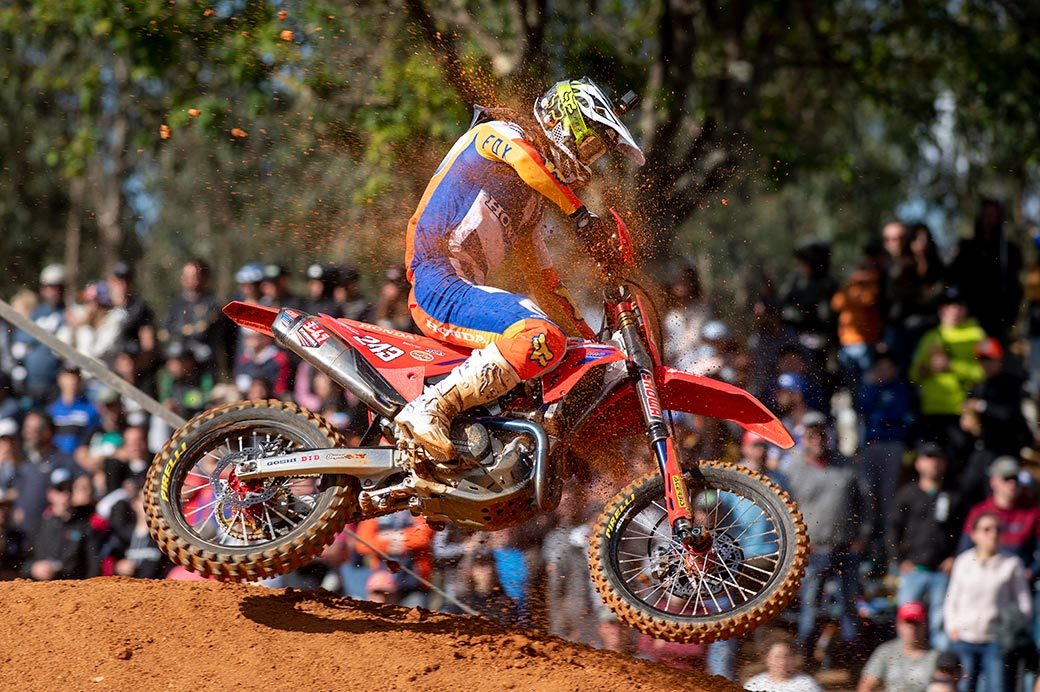 Team HRC’s Tim Gajser kept his race win streak alive with a dominating second moto victory at the MXGP of Portugal in Agueda.

The #243 was second round the first turn, before making his move and controlling the rest of the race for his fourth race win of what is turning into an excellent season so far.

In what were almost perfect conditions at the beautiful Agueda track, the Team HRC duo were looking to bounce back after a difficult qualification on Saturday, with Gajser having seventh gate-pick and team-mate Mitch Evans down in 15th after a couple of inopportune mistakes from the pair in their qualifying races.

In race one, that gate-pick proved a bit of a hindrance for Gajser who was only able to round the first corner in mid-pack. 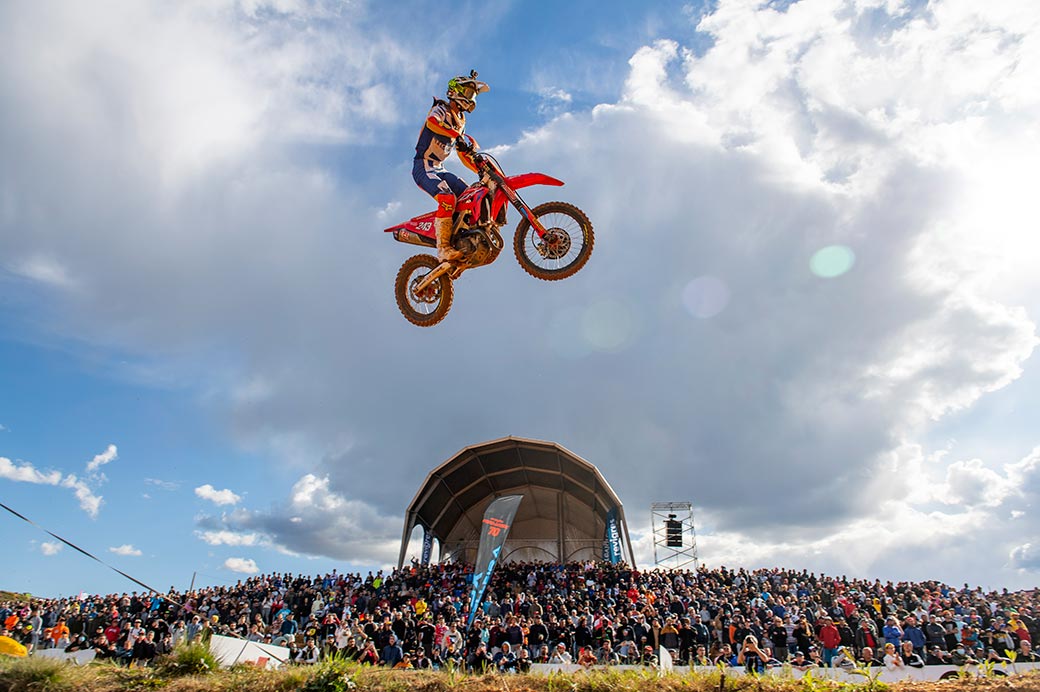 By the end of the first lap, he was in sixth position but with the front two pulling away, he knew he’d have his work cut out to reach them. However, gradually he started making moves and with six laps remaining he was in third, seven seconds behind the pair. He started laying down really fast lap times but unfortunately, time was against him as he crossed the finish line in third, just two seconds behind race winner Jorge Prado.

Motivated to fix that in race two, Gajser swept round the first corner in second place, perfectly poised to make the pass and win the second moto. After watching and waiting for five laps, he pounced on lap six and quickly pulled out a gap that he extended every lap until the chequered flag.

This marked Gajser’s fourth moto win of the season, and although he just missed out on the overall by two points, he still extended his lead at the top of the MXGP championship to 21 points. 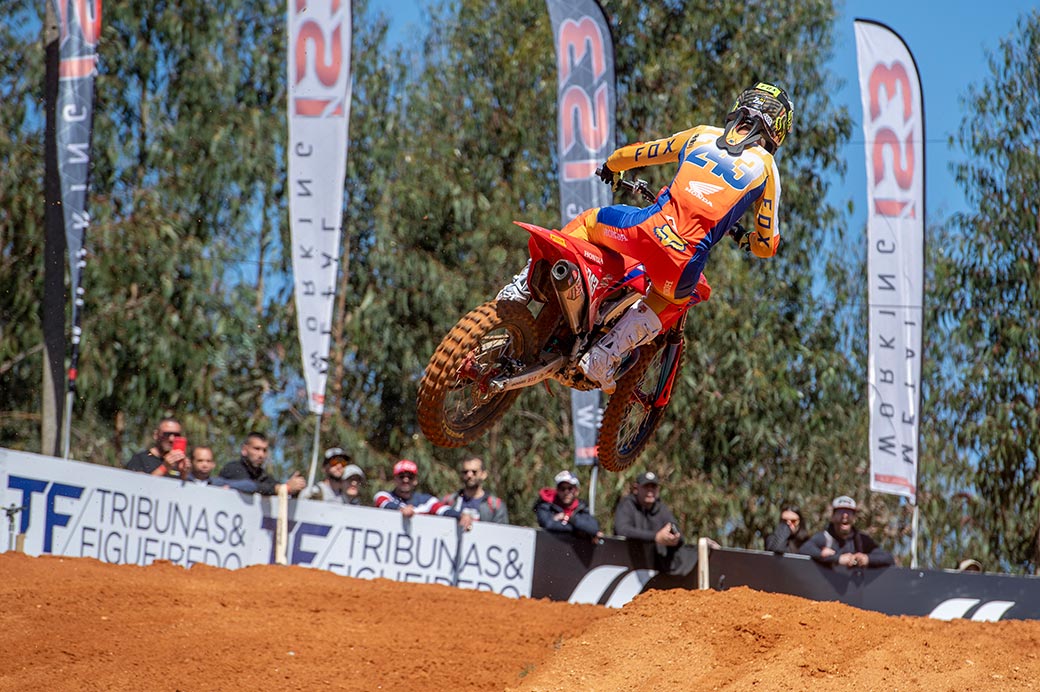 “I had a really good day today, winning that second race and just really enjoying my riding on what was a difficult track,” said Gajser. “It wasn’t quite enough to take the overall but I am still very happy with how it went and how I was able to come out and perform in the second moto.

“The first gate-drop didn’t go so well and it took me a bit of time to get my rhythm and make the passes I needed, and finishing third, I knew it would be difficult to take the overall. Still, it was a good day, with a lot of fans cheering me on and it was nice to back in Agueda because I really enjoy riding here.

“Next up is Trentino, which I’ve heard will be a different layout so that should be interesting for everyone. A big thanks to the team for all their work so far this season and let’s keep this momentum going!” 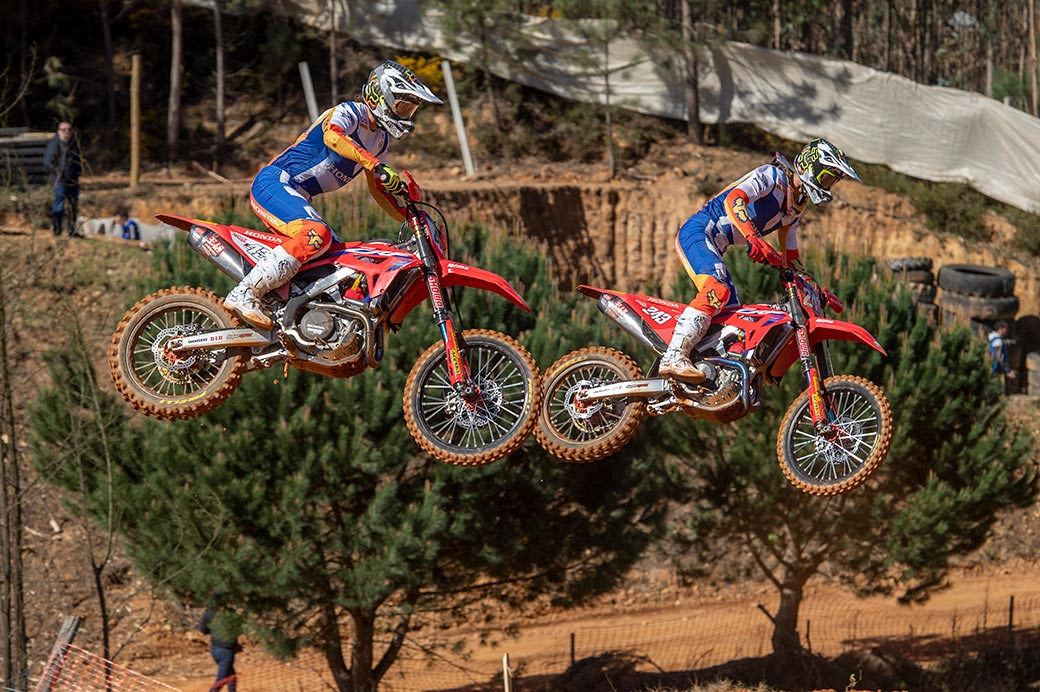 For Evans, the 15th gate-pick really posed him problems as he wasn’t able to avoid the chaotic first turn in either race.

In moto one, a couple of bikes came together in front of him and by the time he had negotiated the carnage, he was way down the field.

Then in race two, he had to pick himself off the ground after another bike hit him, re-joining the race right at the back of the class again. However, that didn’t discourage the Australian and he set about trying to make the best of a bad situation, passing eight guys in race one and an even more impressive 10 guys in race two, to finish 15-12 for 12th overall.

“Today definitely didn’t go to plan as both races were pretty much ruined after the first turn,” said Evans. “I wasn’t able to come through it cleanly and that meant I had a lot of work to do in the rest of the race, to even get to challenge with the top guys. In race one, I was 23rd after one lap, and in race two I was 22nd so that tells the story of how my motos started.

“However, I didn’t give up in either race, keeping a good pace and trying to pass as many guys as possible. This resulted in 15-12 results for 12th overall, which aren’t where I want to be, but it still gives me a bit of satisfaction because of where I started. Hopefully next week in Trentino I can get better starts and show my speed nearer the front of the field because that’s where I feel I belong.”

Next weekend, the riders are back in action for round five at the picturesque MXGP of Trentino, home of the familiar Pietramurata circuit. After hosting six rounds in the last two seasons, the venue has changed the layout for this year to give everyone a fresh start and hopefully provide another beautiful setting for what has been an amazing beginning to this 2022 MXGP campaign.