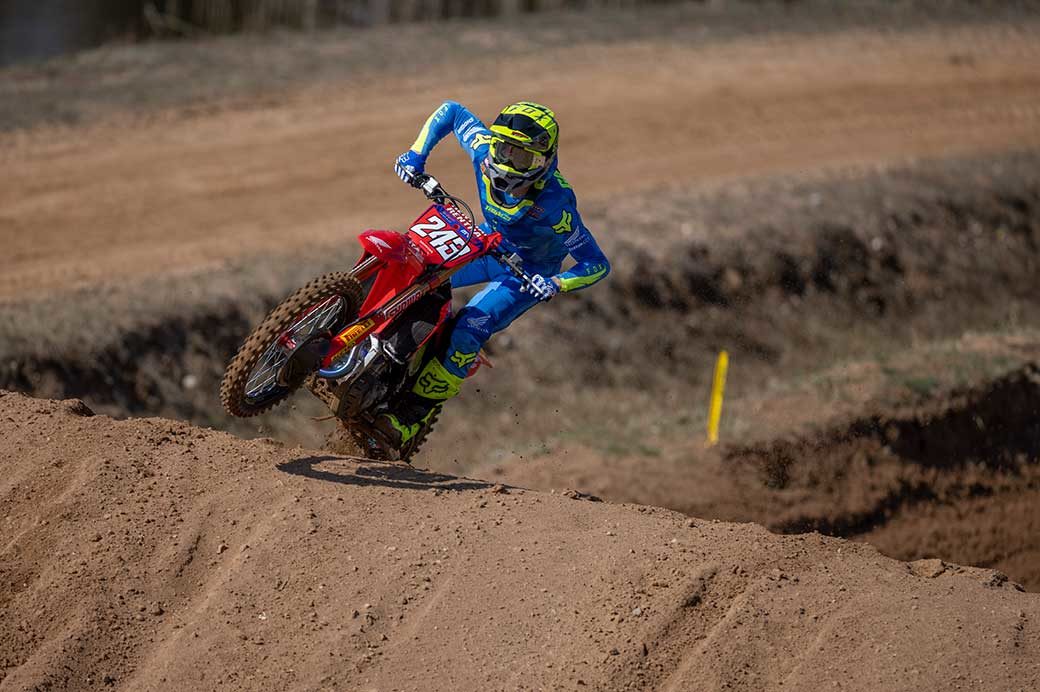 Team HRC’s Tim Gajser finished third in the MXGP qualifying race as he fought hard on a difficult Kegums track.

Heavy rain has been forecast for the weekend in Latvia, and as a result, the track hasn’t been ripped or watered to any great length, making for a relatively high-speed and flat race surface for the majority of the day. This meant that times were extremely close in practice, with less than a second separating the top six.

Gajser was on for pole position but a mistake in sector three meant he had to settle for second gate-pick for the qualification race.

With the tight 180 right-hand bend starting off proceedings, the riders know that a good jump is crucial or you are pushed out to the outside. For Gajser, that meant moving up from fourth place, which was proving difficult as the lines took their time to develop.

On lap four he moved into third place and despite pressuring second place for the rest of the moto, he finished third, still giving him a good opportunity for tomorrow’s motos.

Gajser will be looking to continue his impressive beginning to the season, after winning four of the first five rounds and opening up a 33 point at the top of the MXGP class.

A lot of rain is expected overnight and into tomorrow, so the riders could be waking up to a much different Kegums circuit when they first hit the track for a warm-up at 10:45am. The motos then start at 14:15 and 17:10 for what is the sixth round of the 2022 World Motocross Championship.

Tim Gajser: “It was a solid day, on what was a very tricky Kegums track. In the end, I finished third in the qualification race and while I felt I had the speed to fight for the victory today, I couldn’t make the passes happen and instead felt it was better to finish third than risk too much, when the points-scoring races are tomorrow. I still have a good gate-pick and if I can get two good starts, I know I have the speed to win the motos and attempt to win my fifth overall of the season.”

Marcus Pereira de Freitas, HRC General Manager – MXGP: “Starts will be critical and we are going to make sure that Tim and Mitch have the best chance of getting out of the gate well and round that first corner in a position where they can challenge at the front of the field.