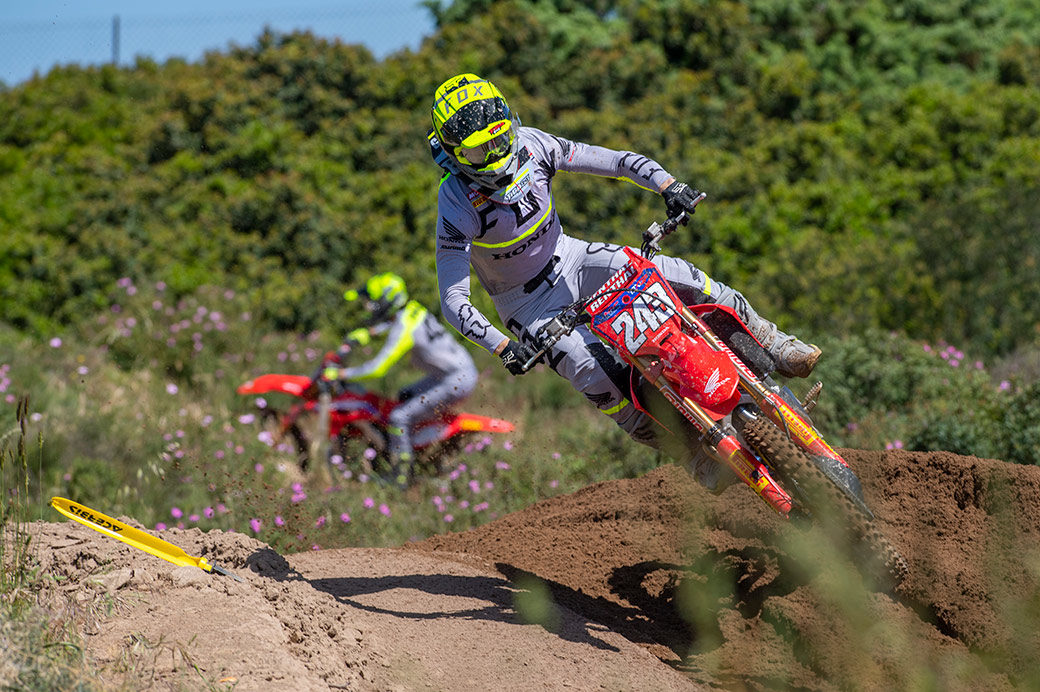 Tim Gajser has revealed extenuating circumstances after he dramatically fell off the pace at a brutal MXGP of Sardinia, leading to his worst result so far in the 2022 FIM Motocross World Championship.

Despite his struggles at Round 8, Gajser still leads the MXGP championship by 79 points after the hottest and toughest Grand Prix of year at the Riola Sardo track in Sardinia, Italy.

The deep sand track is a difficult enough challenge on its own but with temperatures approaching 30C, it was a real struggle for a lot of the best motocross riders on the planet.

Things were made even more difficult for the Slovenian as he came into the event having not eaten food for the previous couple of days due to an upset stomach. Thanks to the work of the team providing the best medical care possible, he was able to compete at a high level for most of race one, but it did mean that he wasn’t able to continue the winning streak that saw him win the last seven motos and take six overall victories out of seven GPs so far this year.

A holeshot in race one made his life a lot easier, as his Honda CRF450R powered him into the lead and gave him a clean track to try and navigate. Despite pressure the entire race, it looked like the #243 would hold onto the lead and take one of his toughest wins of the season, but with a couple of laps remaining, his illness caught up to him and he had to relinquish first position. Still, a second-place was more than he expected coming into the weekend and actually extended his points advantage in the championship.

Race two didn’t get off to such a good start but he was still able to work his way into sixth by the time they crossed the line for the first lap. Settling into a good pace, he knew what he needed to do in order to finish with good results, however, a crash halfway through the moto ruined those chances as he re-mounted down the field. Despite that disappointment, he kept it steady for the rest of the moto and crossed the line in 12th place, knowing that he’d been able to salvage a good haul of points given his condition. 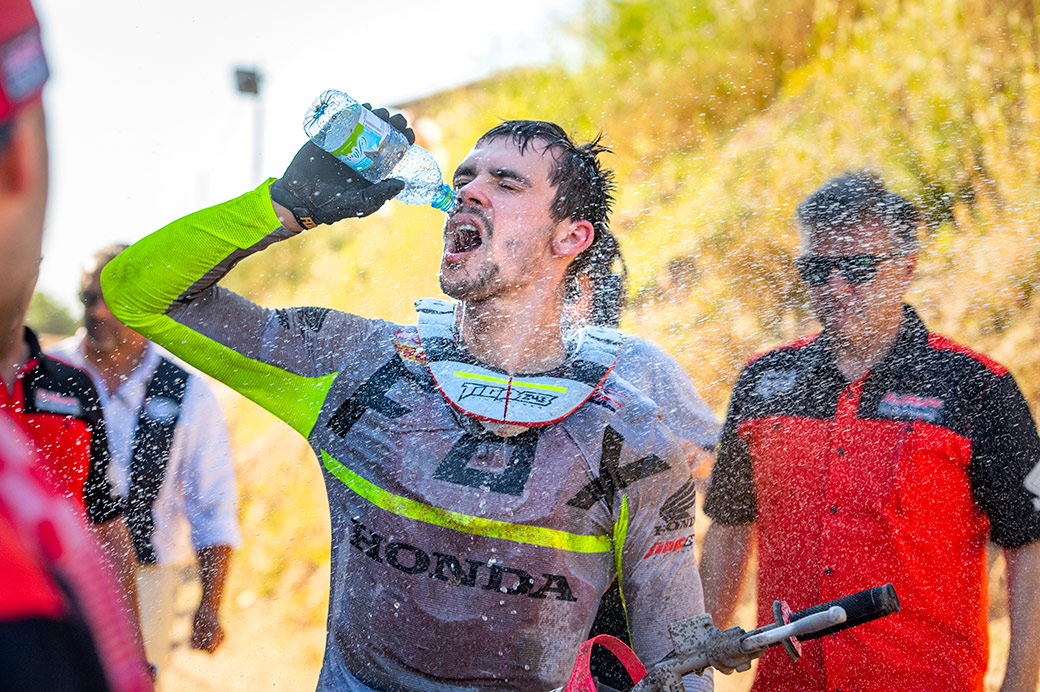 “Obviously, these aren’t the results I wanted coming into the weekend, but leading up to the race I knew it would be a struggle,” said Gajser.

“I hadn’t been feeling well at all, and I knew that with the high temperatures and the difficulty of the surface, I would need to be at my best to be able to compete in this MXGP class.

“In race one, I got my second holeshot of the year and controlled the majority of the race. It was just the final two laps I ran out of energy and had to settle for second.

“Unfortunately, in race two, I didn’t get as good a start and although I was feeling like I could run the pace and move through the field, I crashed whilst I was in sixth and that really hurt my momentum as I re-joined the race in 12th.

“I kept running, and finished the moto there, only dropping a couple of points in the championship battle but I am a little disappointed how it turned out overall.

“I would like to say thank you to my girlfriend Spela, who missed her first event in six years as she was too sick to travel, I really appreciate everything she does and I missed her a lot. Also, a big thank you to Giulia and Filippo and the whole of Team HRC who helped get me through these two races, it wasn’t easy and without everyone’s work, my results would have been worse. Now, I just need to get myself fit and healthy again and get back to my previous form.” 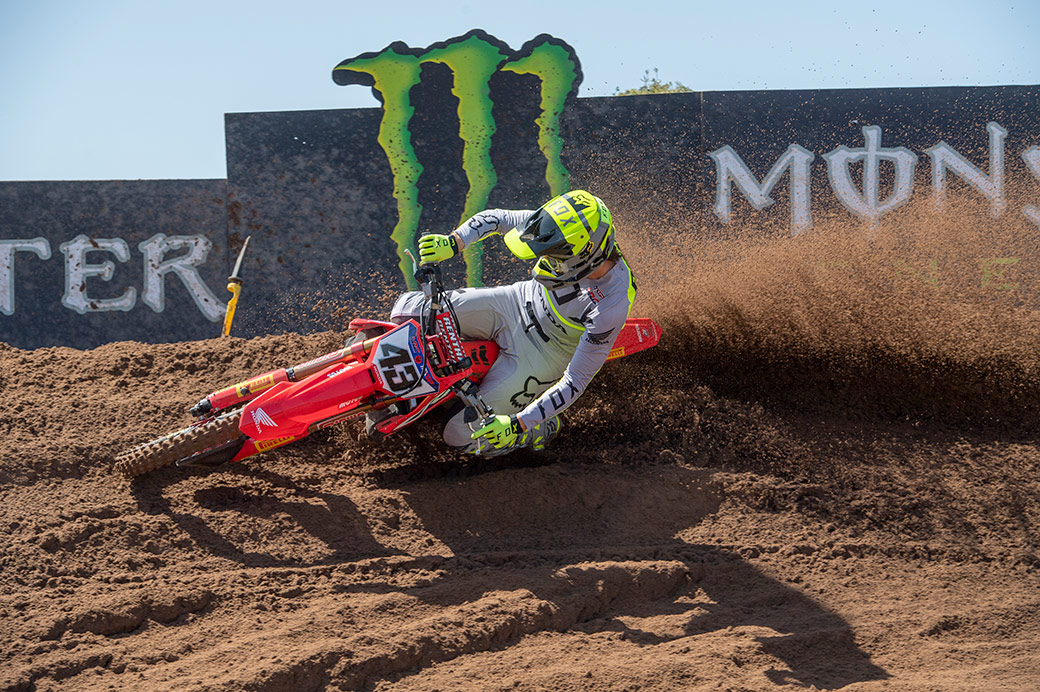 Things were equally as tough for team-mate Mitch Evans whose final results definitely don’t reflect the speed the Australian was able to show this weekend.

In race one, the #43 was the fastest rider on the track at one stage of the moto, passing riders and moving towards his first top-five finish of the season. However, the high temperatures took their toll and with just a few laps remaining, Evans dropped down the field and crossed the line just out of the points.

Looking to make amends in race two, he stormed out the gate and looked like he’d be fighting for a holeshot. Unfortunately, as he looked to sweep around the outside of the turn, he hit a soft spot of sand and buried his front end. In the aftermath of the crash, another rider ripped off his front brake and he had to pull into the pits to try and fix the bike. By the time he re-joined the race, he was well down the field, but he still was able to do a couple of really fast laps before pulling out to fight another day.

“For three-quarters of race one, I was really excited for how the weekend would turn out. However, then the heat got to me and I really struggled to finish the moto and then race two was even worse.

“In race one I had moved up from eighth to fifth and I was closing in on fourth place and I was really happy with how I was riding. I’d had a good start as well and had found a good rhythm and things were really flowing, on what was a very rough and difficult track. Then I just really struggled to maintain the same feeling and dropped down the field. It was really tough and a big shame because I was riding so well.

“In race two, I wanted to come out and try my best once again and I really got a good start, and was in the lead heading down the straight. Unfortunately, I found a soft spot of sand as I rounded the first corner and tucked the front wheel. By the time I got back on the bike, I noticed it was damaged so I had to pull into the mechanics to fix the issue.

“Of course, by then I was way behind the rest of the field, so I tried to do a couple of fast laps before pulling off the track.

“It was a disappointing weekend results-wise, but I felt my riding is getting better and I’m on the right path.” 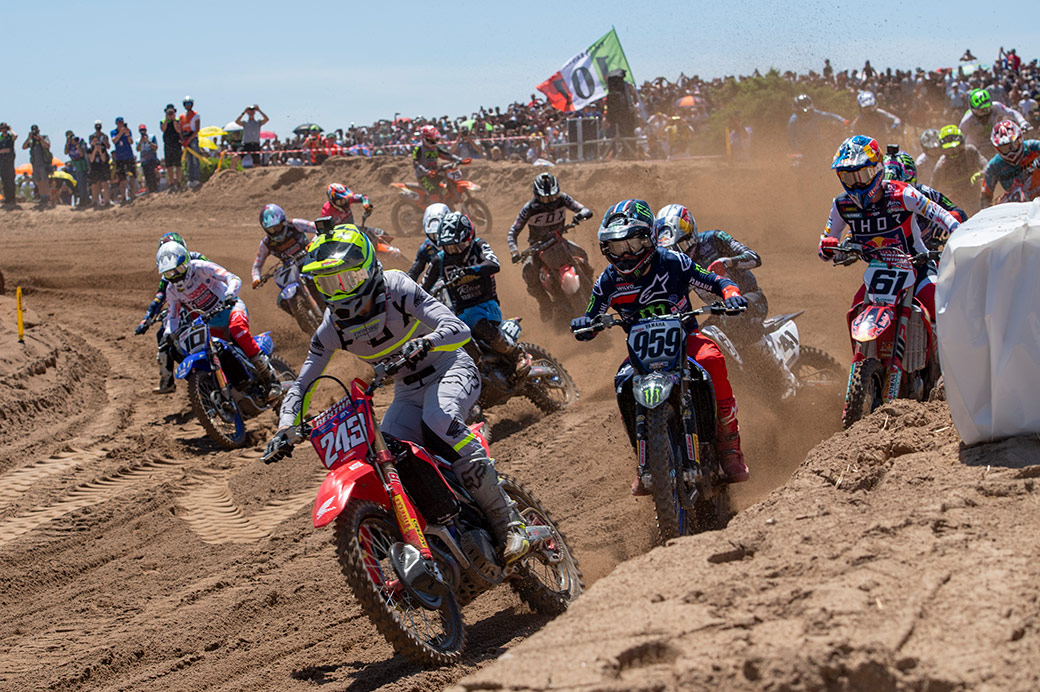 HRC General Manager – MXGP, Marcus Pereira de Freitas: “We knew before the races started this would be a tough weekend, and that’s how it turned out. However, for Tim to only lose two points to his rivals is still a really positive result and one that we would have definitely taken before the gate drops. We saw today how much of a fighter he is when things aren’t in his favour and now with a weekend off, we expect him to be able to fully recover and return to his previous speed for this next MXGP.

“Mitch also had a really tough time of things but we were really impressed with how he was riding in the first moto. He then showed his improved starts in race two, so that gives us a lot of hope that he’s close to really fighting with the riders at the top of the field.”

The season now has a weekend off, giving Gajser and Evans a chance to recover, recuperate and prepare themselves for the ninth round of the championship in Spain on May 29, where both riders will be looking for redemption.

For Gajser that’ll be looking to get back to winning ways and extending his impressive 79-point gap at the top of the series, while Evans will be hoping to put together the complete package at the track and get the points haul his speed deserves.