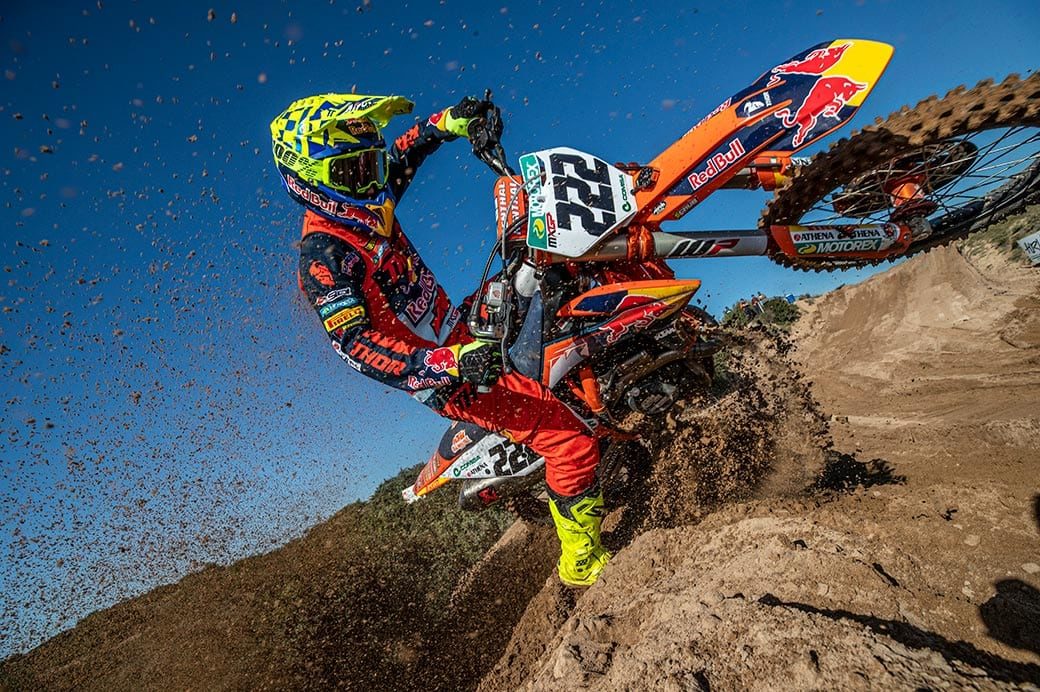 Tony Cairoli has announced his plans to retire from motocross racing at the end of the season, ending a distinguished world championship career that began in 2004.

“This is not an easy decision,” said the 35-year-old who will turn 36 just before the Motocross of Nations.

“I’ve always said that numbers and statistics did not mean that much to me. I think it was an achievement for me and my family to win one world championship so to have had a career like this is very special.

“I feel that it is the right time to stop. Everything around me makes it seem like the right decision, and we are still trying to win the title this year, so the motivation is high for this challenge.

“I want to thank all those who have helped me and supported me since I came to the world championship, and all along the way actually. There have been many faces and names and of course all the excitement and love from the fans.”

Cairoli celebrated his first FIM Motocross World Championship Grand Prix win at Namur in 2004 and has since become one of the most decorated motocross athletes of all time.

He won his first MX2 world title with Yamaha De Carli in 2005 and repeated the feat two years later when he won out against a young Brit called Tommy Searle. That was only the beginning of Cairoli’s glittering career. In 2009 he moved up to the premier MXGP class with Yamaha Red Bull De Carli, winning in his rookie year. It was the start of the ‘Cairoli era’ as he claimed six straight titles between 2009 and 2014. He has won at least one Grand Prix in all his 18 terms.

Together with Claudio de Carli and his loyal technical crew, Cairoli has been a mainstay of the Red Bull KTM Factory Racing team, image and development program since 2010.

TC was a constant pain in the side of Clement Desalle – three times Cairoli stood in the way of the Belgian winning a world championship with the MX Panda having to be content with a runner spot.

Few competitors have had success at the expense of Cairoli – he lost out to Romain Febvre in 2015 and Tim Gajser in 2016 before beating teammate Jeffrey Herlings to the world title in 2017.

His nine championships to date are only bettered by Belgium’s Stefan Everts’ achievement of 10. However, Cairoli hasn’t yet given up on a record-tying 10th title – sitting in third place with 326 points; he is one point shy of Febvre and 29 points from table-topping Gajser.

Cairoli last won a Grand Prix at the 2021 MXGP of Great Britain. The king of Matterley showed what an incredible athlete he still is as he beat one of the strongest gates ever seen at the Basin.

The only thing missing from his impeccable CV is the Chamberlain Trophy. He will have his final tilt at the Motocross of Nations on home soil this year with Mantova hosting the event on September 25-26.

While he is retiring from motocross racing, he is not leaving it behind.

The Red Bull KTM Factory Racing icon will move into an ambassadorial role with the KTM factory for the foreseeable future.

Cairoli’s contract extension with the KTM family means that the Italian will provide his expertise in various segments and potential future endeavours within the KTM group, all with the aim to continue developing the sport of Motocross for all audiences.

“I have felt very much part of the KTM family from day one and we will continue our work and relationship together, but now in a different way,” added Cairoli. “There is a lot more to do in life after 2021 but for now our goal is very clear.”

Pit Beirer, KTM Motorsports Director: “Our story started in an impressive way because when Tony came to KTM when we still hadn’t won a title in the premier class and we were also developing the KTM 350 SX-F, so it’s like there were two challenges to conquer! To then win five consecutive championships and establish the 350 concept was a big milestone for us. Over the years the relationship became closer and the friendship grew even more. A lot of our success both in the U.S. and in MXGP arrived because of those first years with Tony and the belief that he had in us and the vision for the future. It’s something we didn’t forget and we won’t forget.”

Robert Jonas, VP of Motorsports Offroad: “We’re immensely proud to have been such a major part of Tony’s career story and to have contributed so much to one of the best motocross racers the sport has ever seen. When we first started working together with a motorcycle that was almost a gamble for the highest level of the world championship at that time, I don’t think we could have imagined the success that would come, and just how deep Tony was able to make his impression on MXGP. He has fans all over the world and some of the biggest are right here in the factory. It will be strange not to see that orange #222 on the track next season but his passion for riding and his experience will still be big assets for us. The story doesn’t quite end here.”

The 2021 calendar is due to finish with the Grand Prix of Mantova on 10.11.2021. After this event, Tony will remain very much part of the KTM family and part of the KTM race department activities.