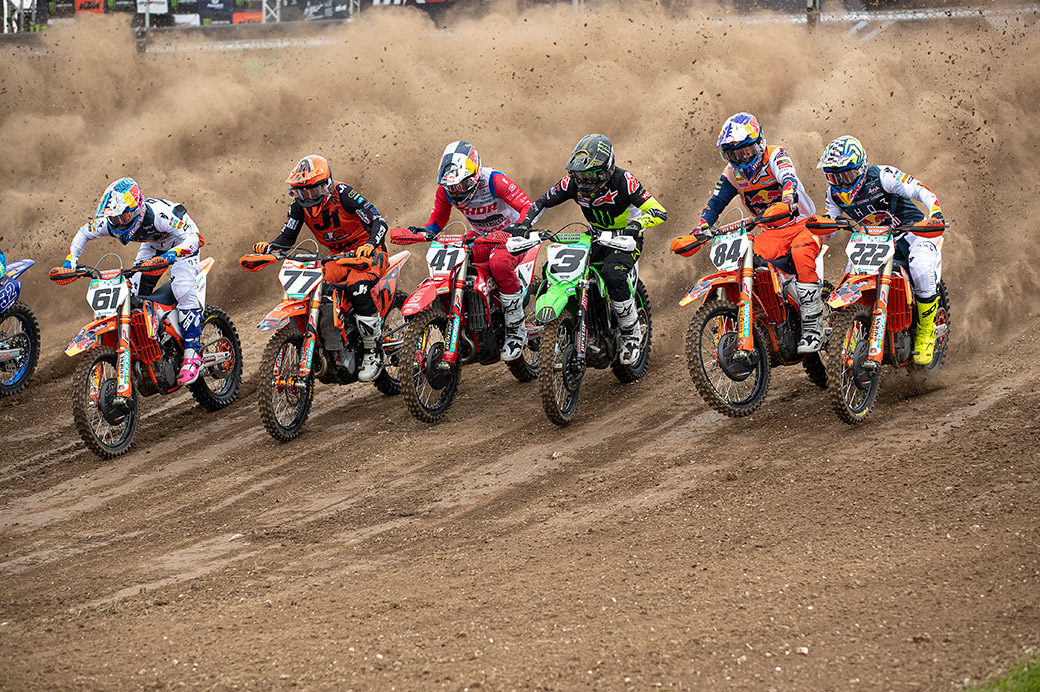 The British Grand Prix formed the second round of 2021 MXGP and the spectacular sprawl of the Matterley Basin circuit was the stage for Red Bull KTM Factory Racing’s Tony Cairoli to post his first win of the season.

The rough, tacky soil of Matterley Basin provided a fast and technical challenge for the three MXGP and three MX2 riders of Red Bull KTM for the first of six Grands Prix to take place in the next seven weeks. A cool, cloudy and showery climate covered the venue in southern England that packed a noisy 4000 spectator attendance into the facility.

Timed Practice saw a Red Bull KTM 1-2 with Tony Cairoli notching the fastest lap just ahead of Jeffrey Herlings, ensuring two KTM 450 SX-Fs first into the start gate. Jorge Prado, from 6th, grabbed the first holeshot but was passed by Cairoli on the first lap. With Herlings pushing up to seize 3rd place by mid-race distance (and keeping world champion Tim Gajser in his roost), Red Bull KTM went 1-2-3 with Cairoli claiming his first checkered flag of the season and his first since triumphing on home turf last summer.

The second race provided some fantastic entertainment with up to five riders in contention for the lead and the overall podium spots. Cairoli secured 3rd place to ensure his overall triumph and Herlings was 4th after exercising caution when some rainfall created slick conditions around the English soil. The Dutchman ranked 3rd on the day for this second consecutive trophy. Jorge Prado was among the group but a misjudgment with his set-up meant he had to roll home in 7th. The Spaniard ended the GP in 5th, meaning all three Red Bull KTM athletes filled the top five positions in the UK. 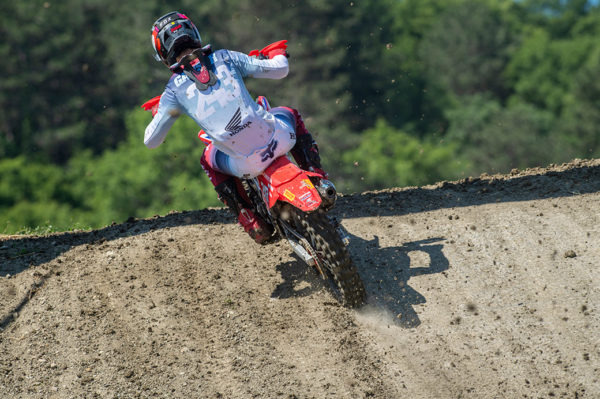 Tony Cairoli: “I actually enjoyed the second moto more because there was a lot of passing and it was nice to be back in that type of battle. The track was getting nice and it was a good race.

“I had two fast starts today. The first win felt nice, especially after the disappointment of being so close in Russia two weeks ago. We lost a lot of points then but today was positive and I enjoyed myself. I’m looking forward to racing in Italy now.”

Jeffrey Herlings: “Our goal this year is to make the podium as much as possible. It’s been proven in the past that if you do that almost every weekend then you’ll be there or thereabouts at the end of the season for the championship.

“Both motos were okay, nothing too impressive.

“I don’t have the speed yet. I can do it in the morning for one lap but I don’t have it across the race yet. I’m not far away though and there are some good tracks for me coming up.”

Jorge Prado: “Today was good in some ways but a bit negative with that second moto. I was struggling with the track from the morning and how flat it was. I knew the start would be important for me. I had the holeshot but made a small mistake and Tony came past. That was actually pretty good because he was riding really well: I could stay behind him and he pulled me along.

“Physically I felt strong in the second moto, which is positive for the next few races, but I didn’t have the feeling with the bike or the set-up. It was too difficult for me to turn, open the gas and go with the others when they were full-on. I was too slow, even taking some risks. So, we need to look at that.

“We will keep working. It will come. I’m in the right place.” 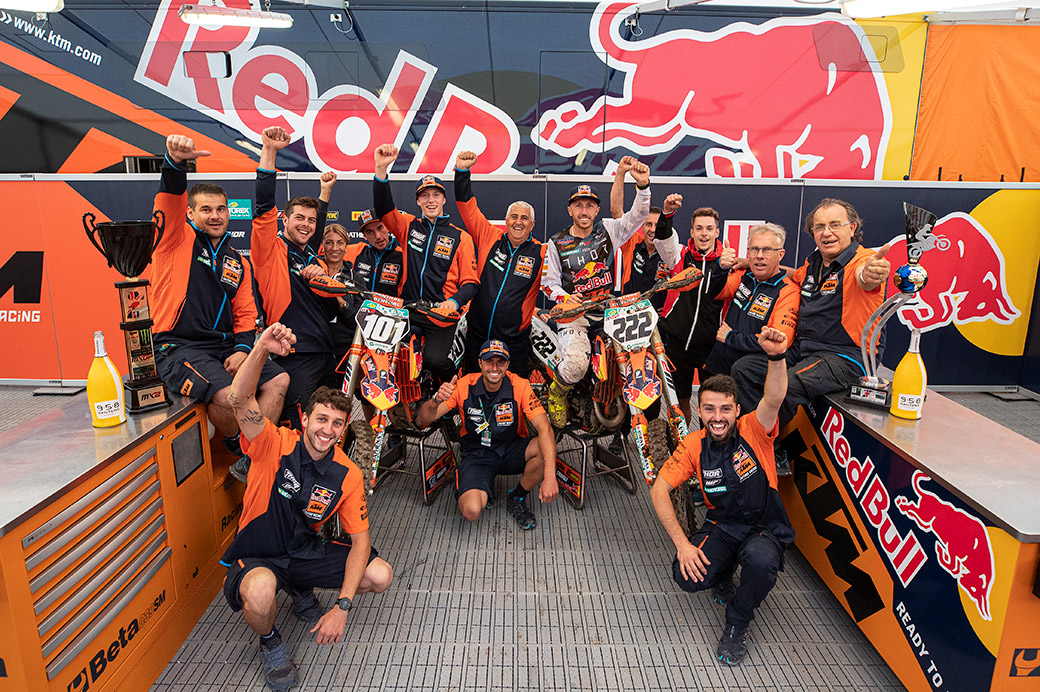 MX2 rookie Mattia Guadagnini was the top finisher in Britain. The Italian pushed his way to fourth position in the first moto as part of an entertaining tussle for podium places. He then controlled the second race from the front. Guadagnini not only won what was only his fourth Grand Prix moto but also walked the overall rostrum in just his second MX2 appearance in Red Bull KTM Factory Racing colors. 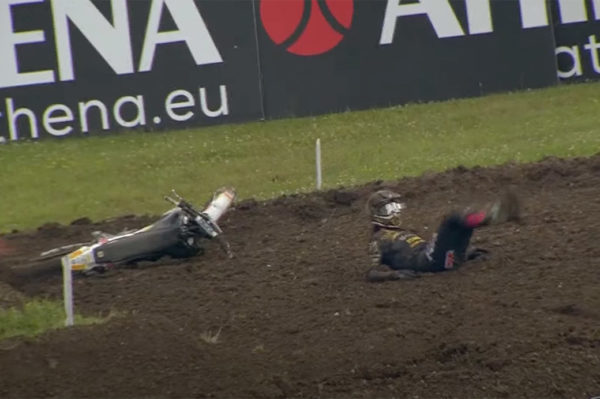 Rene Hofer classified ninth overall in a day of contrasting fortunes. The Austrian made a mistake early in the first moto and ended up circulating with the leaders but a lap down. He finished 30th and outside of the points. In the second moto the 19-year-old was impressively fast and fought for the podium, eventually taking third place for 20 valuable points.

MX2 World Champion Tom Vialle attempted Free Practice but the pain in his right hand was too much for the Frenchman to contemplate the two motos at Matterley Basin. Vialle had suffered a freak and blameless training accident only five days beforehand and will now target round three for a return to action.

Mattia Gaudagnini: “I’m so, so happy. I knew from Russia that I was riding well. My starts were good and I was feeling great with the bike and on the track in the first moto. I had a lot of fun battling for P2. I had the goal to be at the front in the second race and made it happen. I did my own race. I focused on the moto like I was training and tried not to think of the GP. I couldn’t be happier than I am now.” 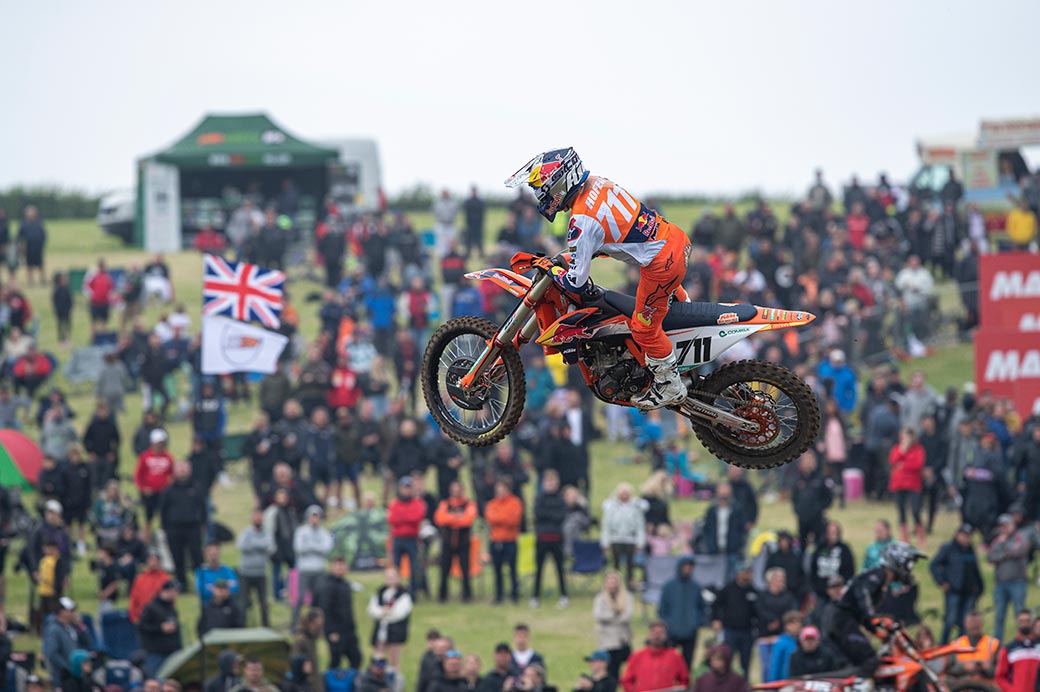 Rene Hofer: “It was a bittersweet day. I messed up the start in the first moto and had a small crash in the second lap. Unfortunately I couldn‘t restart the bike quickly. I still finished the race but all chances for a podium finish were gone of course. It was a shame because I felt really good and I just love Matterley. So, for the second moto I was really motivated and pulled a good start. I was in P2 for a long time and had some really nice battling with the French guys. The track was amazing and allowed a lot of line choice, so it was a super nice and with P3 I took the second top-three moto finish of my career. I ended the day on a good note and that‘s why we’ll go with big confidence to the next round in Maggiora. Thanks to the team for all the effort: it‘s good that we bounced back in the second moto!”

Tom Vialle: “I had a crash training on Wednesday with another rider that hit me head-on. I’m annoyed because it was not my fault. I’m a bit injured but it’s not so bad. I think I need just a few more days. I had pain and we wanted to play safe. It was better to miss today and think instead to Italy.”

The MXGP of Italy will see the world championship thunder around the hills of Maggiora for the first time in five years with round three of the series next weekend. 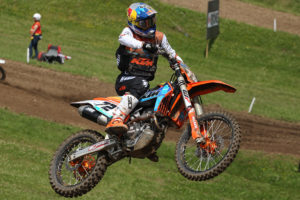 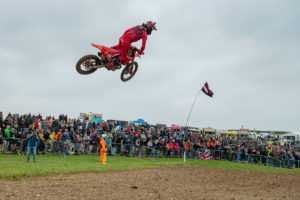 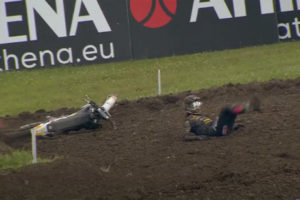 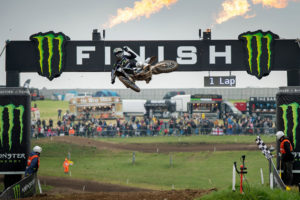 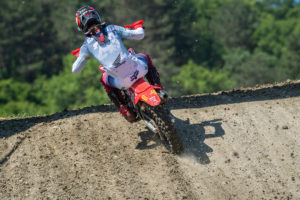 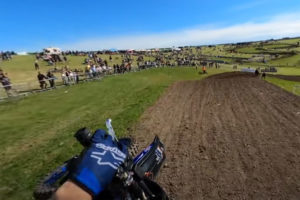