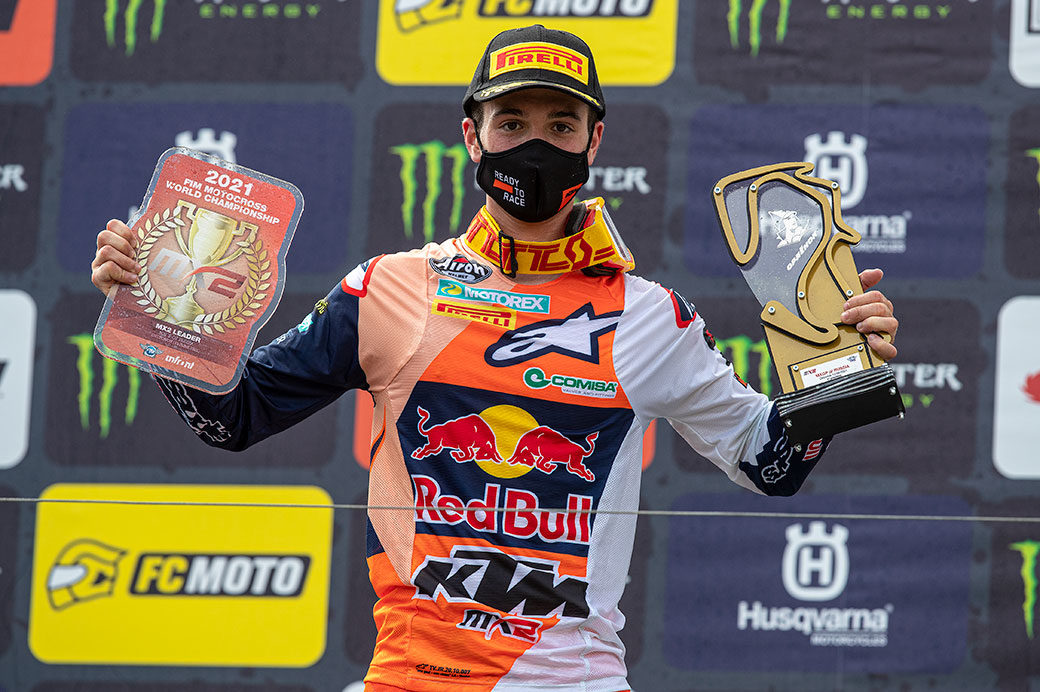 Vialle came to Russia eager to make a statement as the defending world champion and couldn’t have made a more emphatic imprint on the Grand Prix results. A first moto holeshot and two breakaway performances meant the Frenchman was unchallenged and unmatched at Orlyonok. He took a perfect 1-1 and led all 36 laps from both races.

Tom Vialle: “A very nice day! I had a great weekend and I really liked the track. We had a good winter and that paid off today. Two great starts and the work of the team has been amazing, I’m very grateful for that.”

Teammate Rene Hofer finished fifth overall in his first Grand Prix since sustaining a broken arm at round three of the 2020 series last summer. The young Austrian opened his second campaign in the MX2 class with a strong fifth place in the first moto and was then in contention for his first-ever podium result after taking the holeshot and holding a top-five slot in the second sprint. On the last lap he tumbled after close contact with Ruben Fernandez and crossed the finish line in fourth.

“Definitely a good start to the season,” said Hofer. “I wasn’t that far forward in the first moto but moved up from 11th to sixth on the first lap. I rode quite good in the first half of the race but then ran into some arm-pump and was holding on as much as I could for that fifth place. My riding wasn’t great but top five was okay.

“A holeshot in the second moto! But a little mistake meant I went back to third. I could keep up with Fernandez quite well until he crashed. I was making time on Tom, so the middle of the race was really good. Some small errors meant Boisrame could get me, and then I went down on the last lap with Fernandez. A shame but I’m still happy to finish top five in the first GP. A lot of chances still remain to get on that podium.”

Mattia Guadagnini made his very first Grand Prix appearance since joining the Red Bull KTM Factory Racing team in the winter. The highly-rated young Italian gathered valuable experience in his charges to ninth and 10th for eighth overall.

“Not the best but also not too bad for the first GP of the year,” said Gaudagnini. “My starts were not great, so we need to work on those: I made my life difficult! I’m pretty satisfied with my riding and the lap times were pretty good. We can only get better from here. I was 4th in Timed Practice, so that was also a positive.”