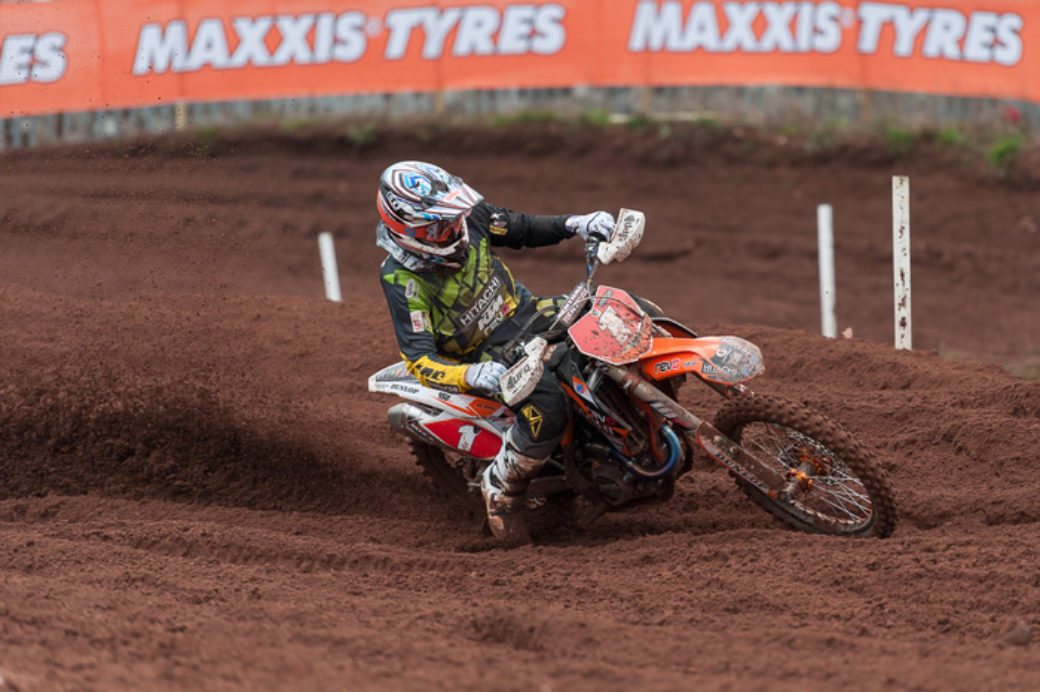 The 2015 Maxxis ACU British Motocross Championship powered by Skye Energy Drink finally arrived at the weekend and Hilton Park had the honour of hosting the first round. In fact it’s the first time the British MX championship has visited the sandy circuit.

It was never going to be anything but cold at this time of year but at least the rain stayed away and the racing action was hot.

MX2 wasn’t as straight forward with a potentially career ending injury for a DRT Kawasaki rider and a number of pilots being docked places for rule infractions. But at the end of the day Ben Watson left the round with maximum points from the shortened schedule.

Racing was delayed for over an hour while medics took care of Mel Pocock after being involved in a freak on track incident in the first MX2 race. That long delay – and questions are being asked why the delay was so long – led to the planned three motos being reduced to two for each class.

On Pocock’s condition – his hand was so badly injured that Monster Energy DRT Kawasaki team manager, Steve Dixon graphically commented, “It was like something out of a horror movie. Mel’s arm looked like it had been through a meat grinder.”

Adam Sterry was leading the moto when it was red flagged and took the flag in second place on the restart, but the KTM pilot was later docked 10 places for ignoring yellow flags. Sterry’s weekend went from bad to worse in moto two when leading the race from Ben Watson, his chain snapped.

Making a return to the series, Estonian Tanel Leok ground out a solid result to take second in the MX1 category with former champion Kristian Whatley in third at the end of a very close final race encounter.

Steven Lenoir followed Watson home in the MX2 class with Bryan MacKenzie taking the lower step on the podium despite his machine seizing within meters of the finish line in the final moto.

Ryan Voase won both veterans motos after fighting off a late challenge from Brian Wheeler in the opening race but gave himself a comfortable cushion in the final race.