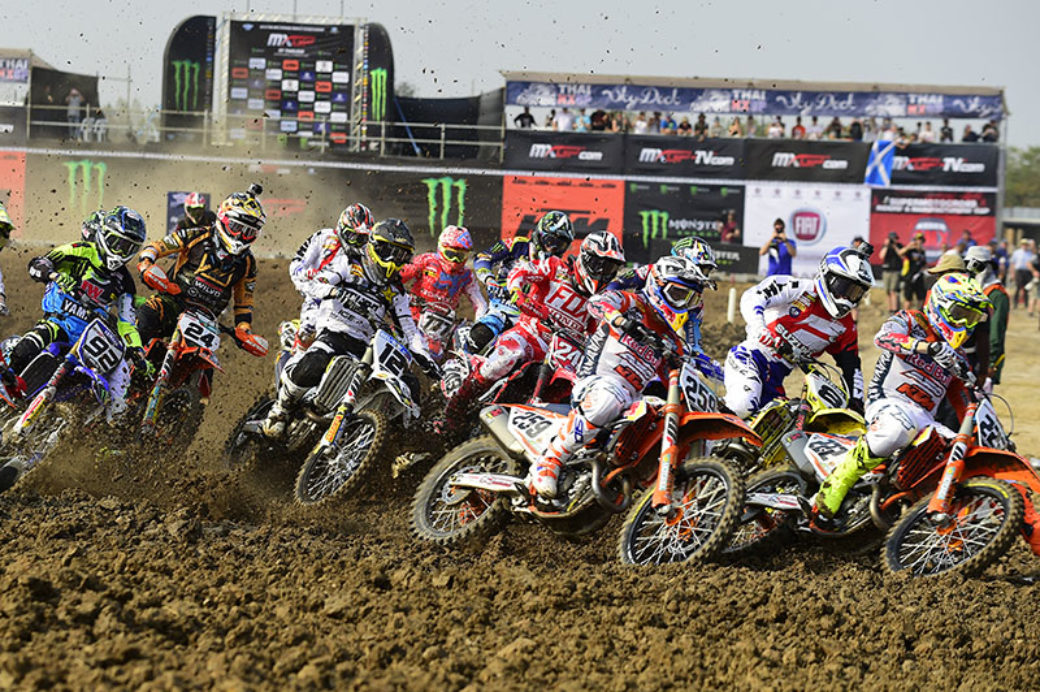 The FIM Motocross World Championship has cemented itself as the most varied motocross series in the world as it covers all corners of the globe and challenges the overall diversity of its athletes by testing them with conditions, climate, track style and culture.

The second round of the 2016 MXGP season kicked off with practice and qualifying today in the heat of Suphan Buri, Thailand where Suzuki World MXGP’s Ben Townley and Red Bull KTM Factory Racing’s Jeffrey Herlings went pole.

The champions were on fire right from the drop of the gate as Red Bull KTM Factory Racing’s Antonio Cairoli led Team Suzuki World MXGP’s Ben Townley and Monster Energy Yamaha Factory Racing’s Romain Febvre around turn one. It was only a matter of turns before Townley, put the move on Cairoli to take over the lead.

After the practice sessions Townley said “The heat doesn’t feel too bad when you’re riding in it, at least for me”, which appeared to be a truthfully spoken statement as he managed to calmly fend off the imposition of Cairoli and Febvre.

Meanwhile, in the early stages of the race Monster Energy Yamaha Factory Racing’s Jeremy Van Horebeek made an attempt at holding onto his teammate, Febvre, while being hounded by the red plate holder Honda Gariboldi’s Tim Gajser. Gajser, who was blindingly fast last weekend in Qatar, was running a good pace until he got squirley while trying to double into the wave section, came up short and went off the track. Thereafter, the youngster backed off and let Van Horebeek go.

Up front, there was no rest for the wicked as the three champions Townley, Cairoli and Febvre played a game of huntsmen and hares. Unusually, Cairoli was the first to crack when he lost traction going into the waves, which allowed the defending champ, Febvre, through. Febvre then went after Townley but ended up giving him a breather when he jumped off the side of the finish line jump with a couple of laps to go.

At the checkers it was Townley who got the job done and took pole, which is only the second time he has done so in the premier class with the first and last being back in 2005 at Matchams Park in Great Britain. Febvre and Cairoli opted to save energy in the final stages of the race and rounded out the top three in that order while Van Horebeek managed to hold off the wrath of Gajser in fourth.

Red Bull KTM Factory Racing’s Jeffrey Herlings went back to Europe after Qatar and only landed in Thailand yesterday. After training all week in temperatures less than 5 degree’s Celsius it was a bit of a shock to the system for the Dutchman when he got off the plane. “Jumping on the plane and landing in 38 degrees and 80% or 90% humidity, that was a bit of a shock but that was my decision and I don’t believe you can adapt to the weather in less than one week so I think it’s better to make the most of the week and go home to the cold. And then with the time difference I maybe slept like 2 or 3 hours last night but hopefully tonight after such a day as today, I should sleep well.” If he was tired or struggling with the heat, it was unnoticeable with his cat-like reaction when the gates dropped and he took his first holeshot of the season. TM Racing Factory Team’s Samuele Bernardini chased him around turn one with his Red Bull KTM Factory Racing teammate Pauls Jonass in third.

It was an impressive first half for Bernardini who didn’t look out of place at all as he fought to keep the current vice world champion at bay. Meanwhile Kemea Yamaha Official MX Team’s Benoit Paturel was demonstrating his love for the hard crusty clay of Thailand as he consistently gained momentum in fourth.

The track began to pack-down in the warm climate as Jonass made a move on Bernardini, which also opened the door for Paturel. While taking advantage of Bernardini as he tried to regroup, Paturel had a hairy moment when he came up massively short on the long Ipone tabletop and bounced himself onto the infield. Fortunately he managed to save it and wasn’t too phased.

At the halfway mark both Jonass and Bernardini started fading. Paturel was the first to take advantage of Jonass’ tiredness followed by Rockstar Energy Husqvarna’s Max Anstie who had a cleaner line through the waves which left him with the inside line on the next turn where he made the move up the inside.

With the lighting of the candles, it was Herlings who dominated for his second consecutive qualifying heat win this season while Paturel put in a career best result in second. Anstie came home in third while Wilvo Standing Construct Yamaha Official MX Team’s Aleksandr Tonkov put in a solid ride for fourth. The most impressive performance of the day was that of Suzuki World MX2’s Jeremy Seewer who crashed in the waves on lap two but managed to bounce back for a notable fifth while Jonass held on for sixth.

As for Monster Energy Kawasaki’s Dylan Ferrandis, his shoulder popped out on its own. The Frenchman expressed his disappointment on Facebook saying, “I dislocated my right shoulder in the waves section without crashing. I will fly back in France tomorrow to visit my doctor as soon as possible, and hope to be back for Valkenswaard”.