When the 999lazer crew set out on their ambitious project to build a living, breathing 700cc two-stroke dirt bike they always had one dream video in mind, and 13 months after the first build episode was released, that dream becomes reality… The Megalodon 700 will take on a Honda CR500!

The team constructed a drag strip and drafted in the help of two-stroke maestro Neville Bradshaw to make the ultimate big-bore shootout happen. They’ve also got a few surprises in store as well! 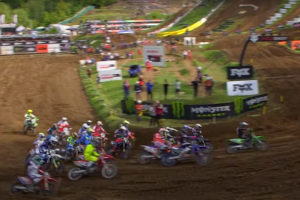