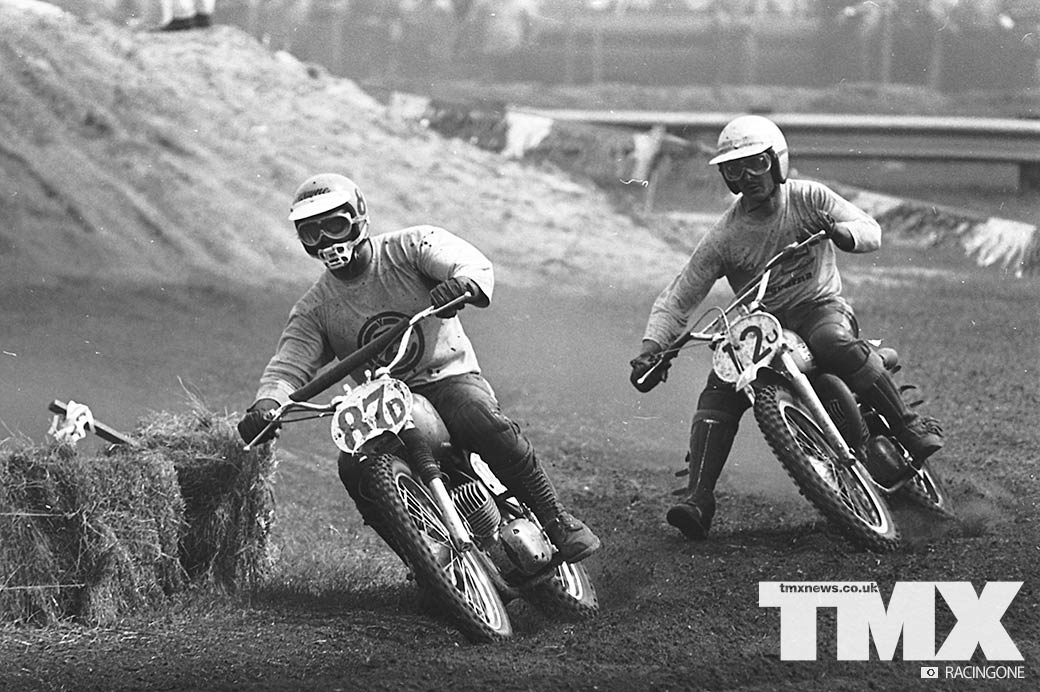 The year is 1971 and with motocross being the hot new sport in America, the Daytona International Speedway adds a proper dirt bike race into the mix of that year’s running of the Daytona 200 speed week.

The history books show that it’s a Husqvarna double as super Swede Gunnar Lindstrom would take the overall victory in the 250 class while Bryan Kenney won the 500s.

One year on and the race moves from a parking lot inside the confines of the 1.5-mile-long oval to the Daytona-emblazoned grass in front of the grandstands. The winners of that day’s motocross were Yamaha’s Jimmy Weinert and Mark Blackwell.

Bob Grossi topped the 250 podium in 1973 which was the year Daytona kickstarted the AMA Motocross Championship while Dutch import Pierre Karsmakers unpopularly beat Californian’s Mike Runyard and eventual national champion Brad Lackey to the top step of the podium in the 500 division.

Supercross – or at least the AMA/Yamaha Super Series of Stadium Motocross – replaced the motocross in 1974 and if the Floridian fans were miffed by Karsmakers’ victory a year earlier they’d be doubly miffed this time as Pierre topped the 250s and Belgian wildcard Roger De Coster aced the Open Class. I wonder what happened to that guy? Hmmm…

Can-Am emblazoned their place in the AMA SX history books as Jimmy Ellis went on a tear in 1975, winning all four rounds of that year’s championship which were run at Dallas, Daytona, Houston and Los Angeles. The Can-Am was famous for its potent power and poor handling with one of Can-Am’s own team riders calling it ‘a 45-horsepower bowling ball’!

In its final year of existence, the 500 class at Daytona was won by Maico’s Steve Stackable who also took the title in a series that only visited three of the tour’s four stops. Interestingly, none of these 500 victories are counted in the Daytona manufacturer win stats – poor Maico…

Tony DiStefano took Suzuki’s first win at Daytona in 1976 as the supercross series became a 250-only affair.

1977 is a remarkable year in the history of the Daytona Supercross as that’s when a Hurricane decimated the competition – Bob ‘Hurricane’ Hannah that is.

Hannah had already won the 1976 125cc motocross championship but was a supercross rookie in 1977. However, that didn’t matter one bit and Bob – and his YZ250 – blew away the competition through the first few rounds which included Daytona. The dominance was such that the series promoter put a $1000 bounty on Bob’s head which would go to any rider that could beat him.

As well as that rather special initiative, 1977 was special for a couple of other reasons – the longest SX Main Event in history (over an hour due to the muddy conditions on the first night of the Dallas double-header) and the only non-Covid-19 cancellation which came the very next night.

Back to Daytona now and Marty Tripes became Honda’s first winner in 1978.

Seven years after winning the Daytona motocross in 1972, Jammin’ Jimmy Weinert – back then the oldest guy in the field at 27 years old – took Kawasaki’s first victory at Daytona in the 1979 Main after making a daring last-lap pass on Hannah live on CBS Sports Spectacular. 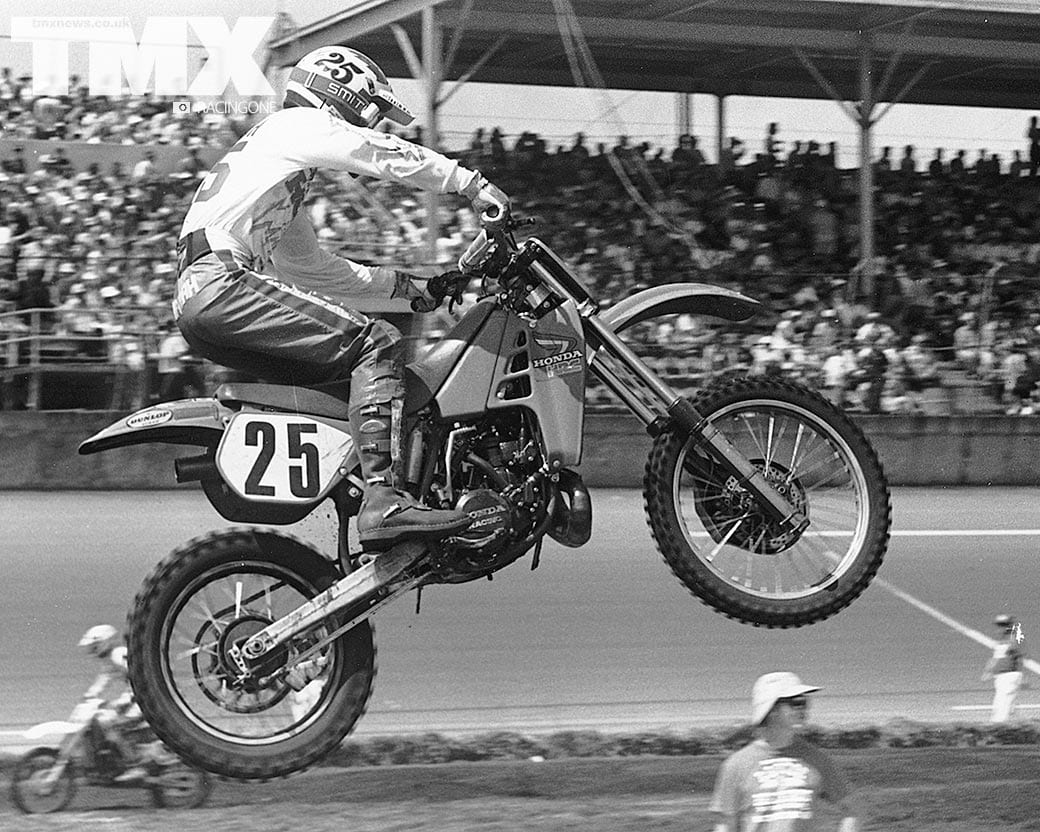 12 months on and Weinert’s dissatisfaction with his Kawasaki equipment led to him resigning from Team Green right there and then after leaving the circuit at Daytona. Yamaha’s ‘Rocket’ Rex Staten was having a much better day of it and took his only supercross win, ever, in the Florida sand.

Darrell Schultz topped the podium in both 1981 and ’82 – the first time on a Suzuki and the second on Honda equipment. Schultz’ ’82 victory would mark the start of the Honda years – an 11-year unbeaten run for the winged brand.

Hannah would win again in ’83 and also ’85 sandwiching David Bailey’s sole victory at the event in 1984.

While Bailey was outstanding on the factory Honda that day, the ’84 race is better remembered for Johnny O’Mara – a supercross champion who never won at Daytona – going all out to snatch the runner-up spot from Ricky Johnson by launching off the finish-line jump. Ultimately he fell just inches short of grabbing second but the tremendous leap was TV gold and got a stack of attention at the time.

RJ won in ’86 after starting fifth and working his way past early leader Broc Glover, Jim ‘Hollywood’ Holley and team-mates Bailey and Micky Dymond who were both fallers in the early laps. Glover set the pace for much of the race but the doggedly determined Honda ace was able to make a pass as the laps wore on and pull away as Bailey climbed all the way back to second.

Heavy rain before the ’87 edition of the race meant track builder Gary Bailey and his team had to work overtime to get the track suitable for supercross. But somehow they managed it even if conditions were wet for the Saturday afternoon on which the event runs under grey skies.

First turn carnage took out favoured runners Johnson and Kawasaki team-mates Ron Lechien and Jeff Ward while privateer Rick Ryan took the holeshot although his lead was shortlived as a string of riders including Rodney Smith, Keith Bowen and George Holland would all find their way past.

But Ryan – a Honda-mounted privateer – dug deep and fought his way back to the front despite riding with an injured knee even though he came under pressure late in the race from a hard-charging Jeff Stanton. We’ll hear more about him very shortly.

Johnson redressed the balance for the factory guys a year on when he overcame the deep and difficult conditions to take a well-deserved win as arch-rival Ward chased him hard.

A wrist injury one week before Daytona meant RJ was a no-show in 1989 and the injury would prove that catastrophic that he’d never be the same again and so we entered the Stanton years.

The Michigan-born racer had earned a reputation as being a hard-training, hard-charging kinda guy which made him the perfect candidate to do well at Daytona. Between 1989 and 1992 Stanton would go unbeaten at the Daytona supercross to rack up Honda’s eighth-thru-11th victories on the bounce.

A Kawasaki rider called Mike Kiedrowski put that streak to an end though as he replaced Stanton as the man to beat and would be for the next three years. Much like Stanton, Kiedrowski was an absolute beast on a bike and at a time when supercross stars were notorious for partying as hard on a Sunday as they raced on a Saturday night, he was one of the few who trained like a madman.

By 1996 Jeremy McGrath – who by that point was considered a supercross specialist having won a pair of 125cc regional SX titles and then three 250cc championships on the trot – wanted to ditch the image of being successful through talent alone. So he trained and he trained and the ’96 version of McGrath was almost as sleek as the CR250 he piloted.

Much drier than previous years, the Daytona clash was the seventh round of that year’s AMA Supercross series and McGrath was on a streak. It was almost inevitable that he’d win with former Daytona badasses Stanton and Kiedrowski now retired and that’s exactly what he did. After moving past Jeff Emig just a few laps in, McGrath finally got the monkey off his back and did what many said he never would – win Daytona. 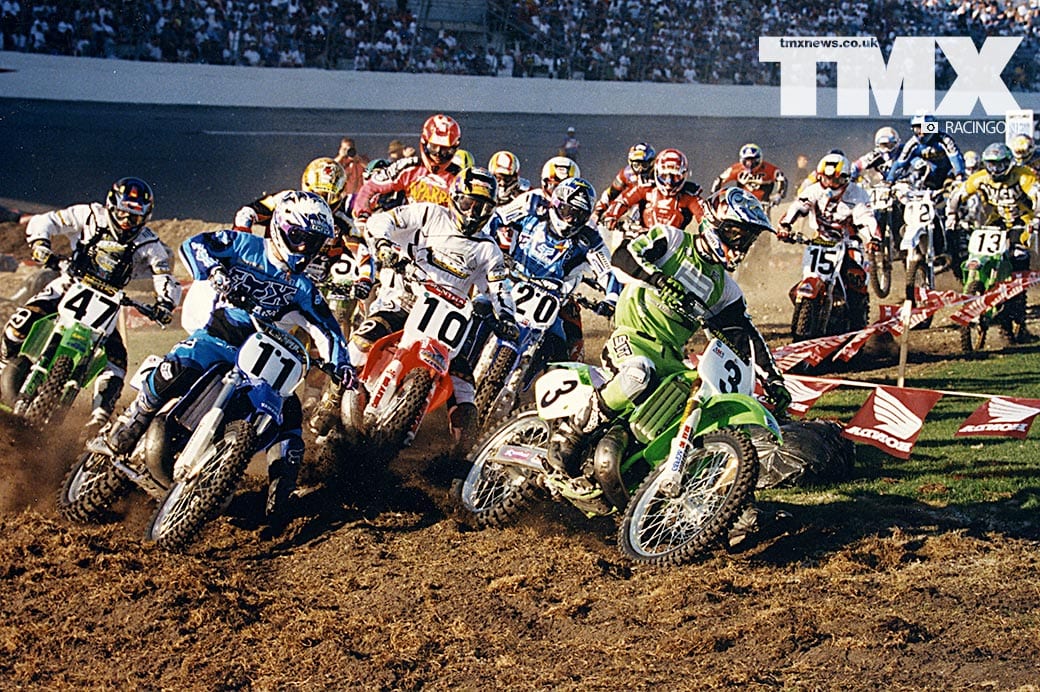 Emig was the man in ’97 though as McGrath muddled through the season on a Suzuki after somehow falling out with Honda in the off-season – definitely something to do with the ’97 model CR250 being pretty much unrideable. Regardless, Emig was on fire in 1997 and would win five Mains – Daytona being just one of them – on his way to taking his only Supercross title. 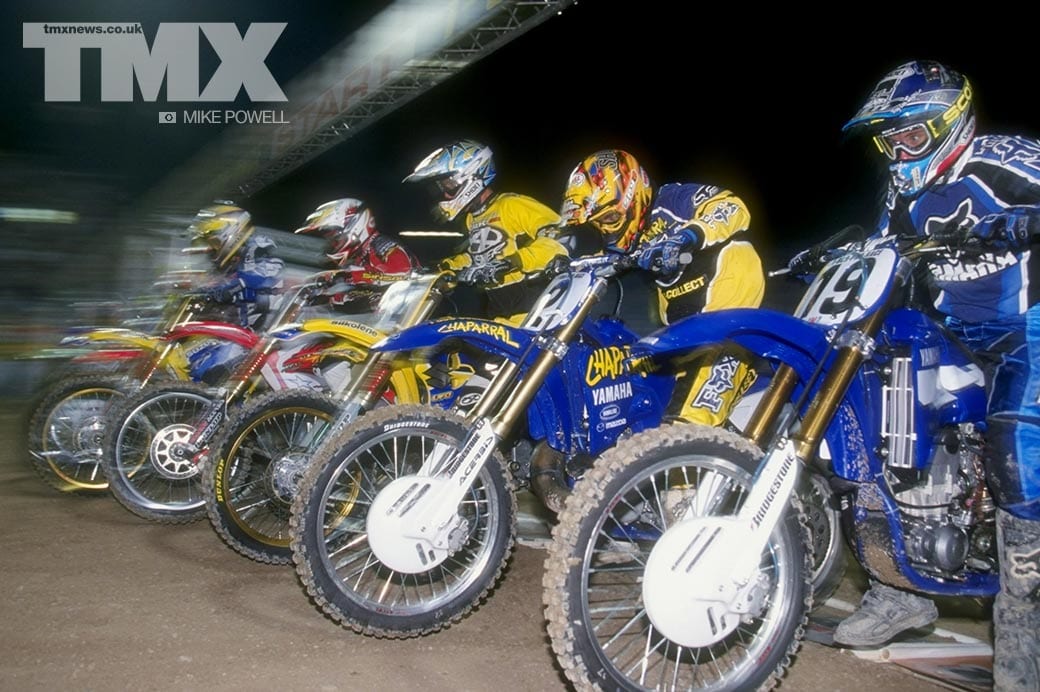 McGrath was untouchable in 1998 and ’99 though as he moved to Yamaha machinery to reassert himself as top-dog on the SX scene.

The new millennium would welcome a new King of Daytona as Ricky Carmichael made his presence felt in the premier class. Daytona would give RC his first SX victory and winning must’ve been something he got the taste for, as he went on to be the winningest rider in US motocross and supercross competition as well as the rider with more wins at Daytona than anybody else.

After winning at Daytona on green bikes in 2000 and ’01, he’d be victorious at two more on red (’02 and ’03) and take a final one on a Suzuki in 2006. A Florida native, RC was always a huge fan favourite at Daytona and as we now know is responsible for designing the circuit. 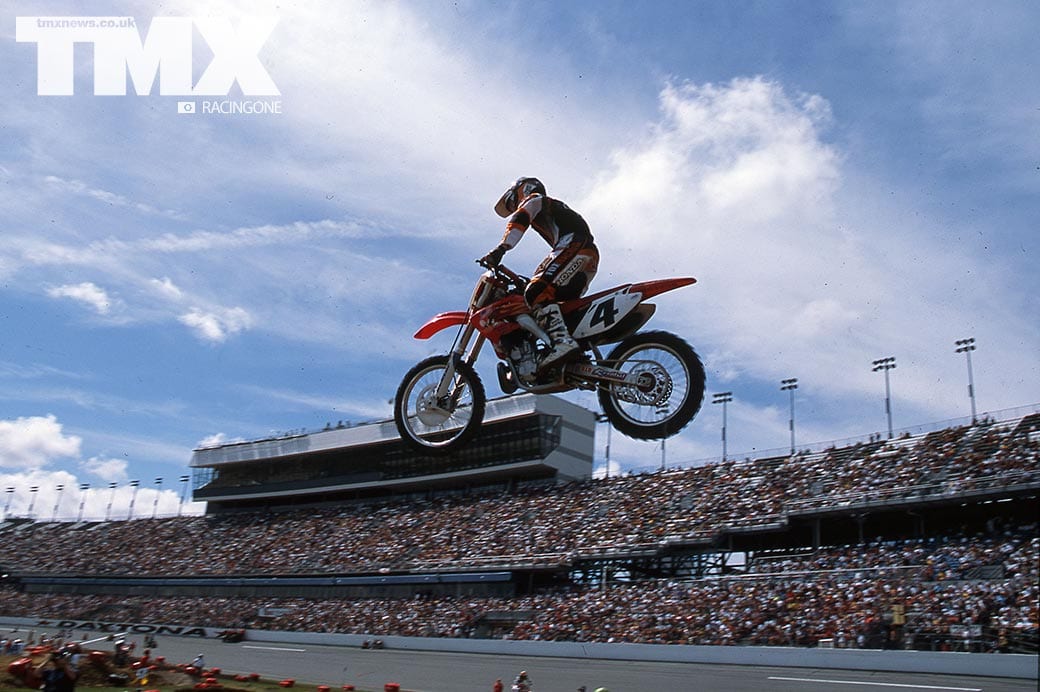 Carmichael was in with a real shot of winning each year between Y2K and his swansong season in ’07 – when he only rode half the SX schedule – but came up against some stiff competition in the form of Chad Reed and later on another Floridian rider, James Stewart. 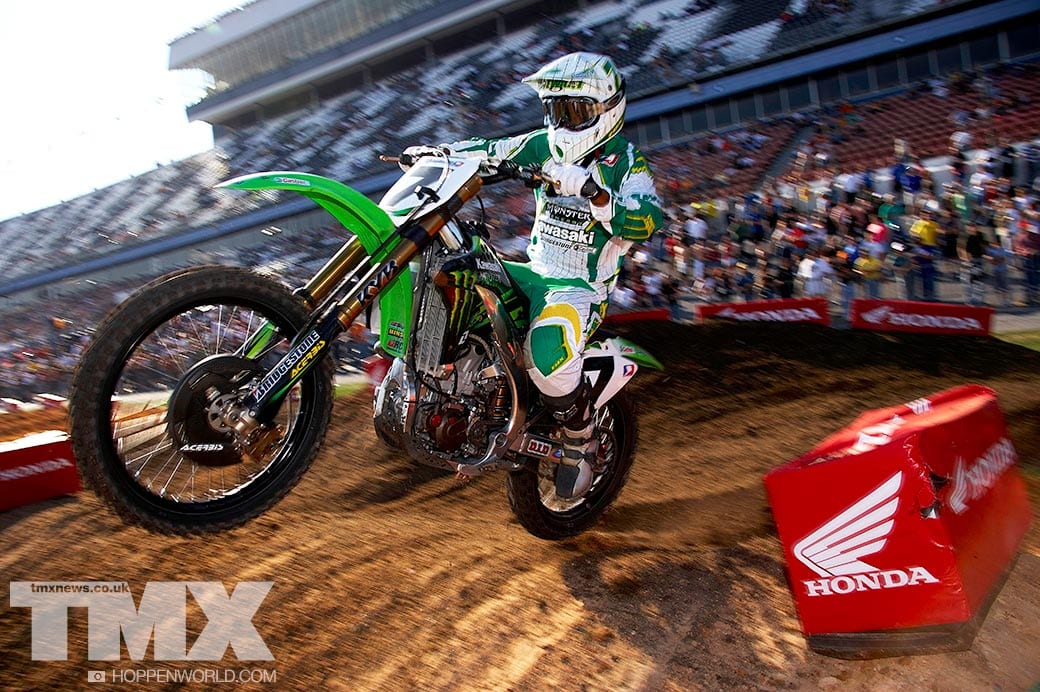 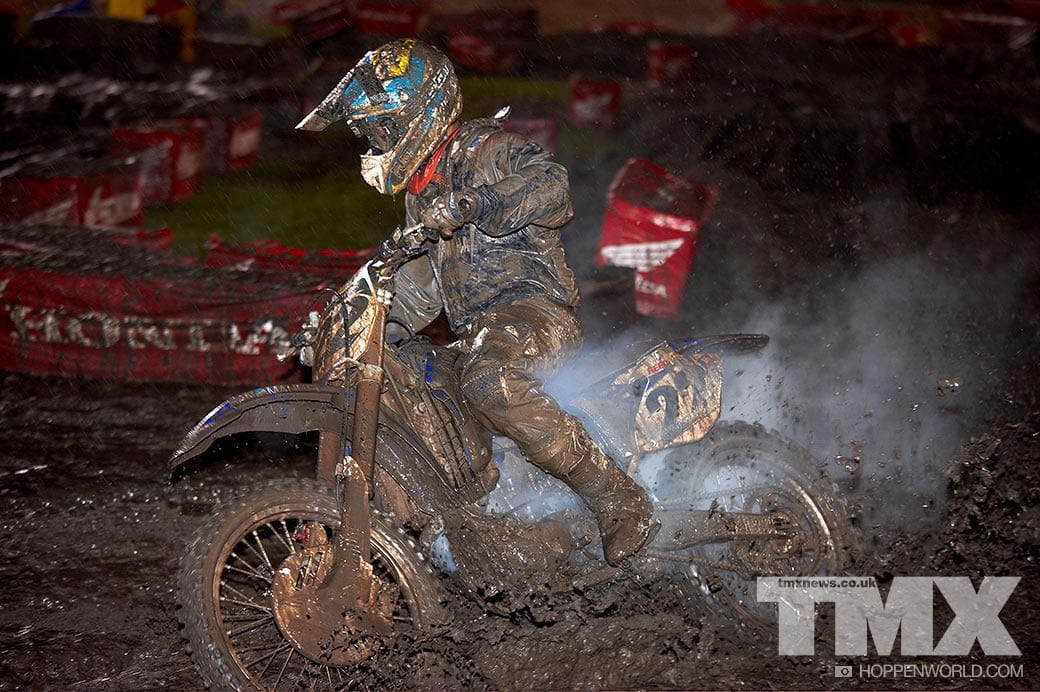 Conditions were crazy and more or less the entire course was under water which meant a good start and smart riding were essential for success. To be fair Reed did everything right for 99 per cent of the race and then just three corners from home his YZ450F ground to a halt – the engine locked up solid after sucking in lots of water and black sand with it. 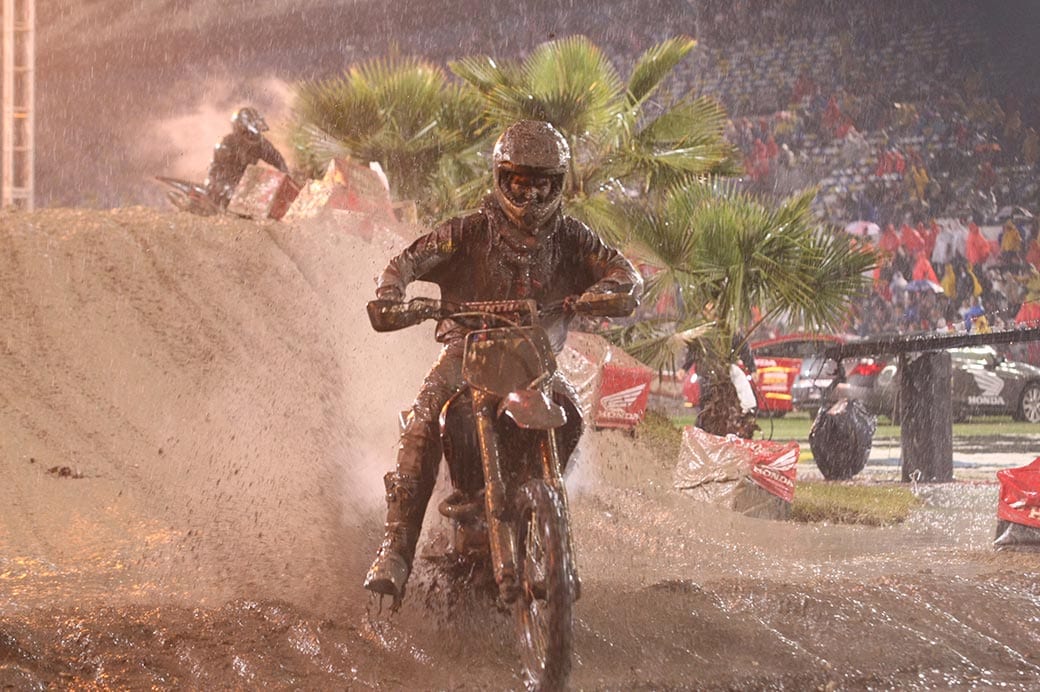 As a distraught Reed watched on, Kevin Windham put Honda back on top of the Daytona podium. Daytona glory for the red team was short-lived however as Reed, now mounted on a Suzuki, bossed it in 2009 to make up for his failure 12 months prior. 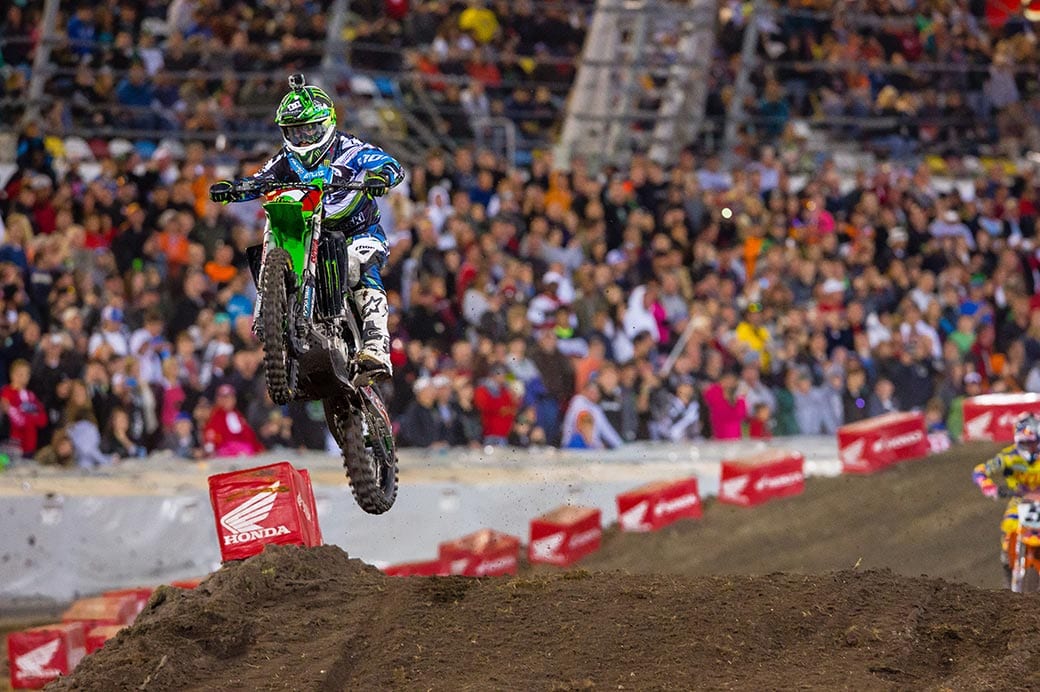 2010 marked the start of the RV era – nope, not oversized motorhomes (although they were quite popular then and still are now for that matter) but rather the years of Ryan Villopoto dominance at Daytona. RV won four races in five years to stamp his authority all over the event. James Stewart took a second win in 2012 – this time on a Yamaha – but other than that it was all RV2. 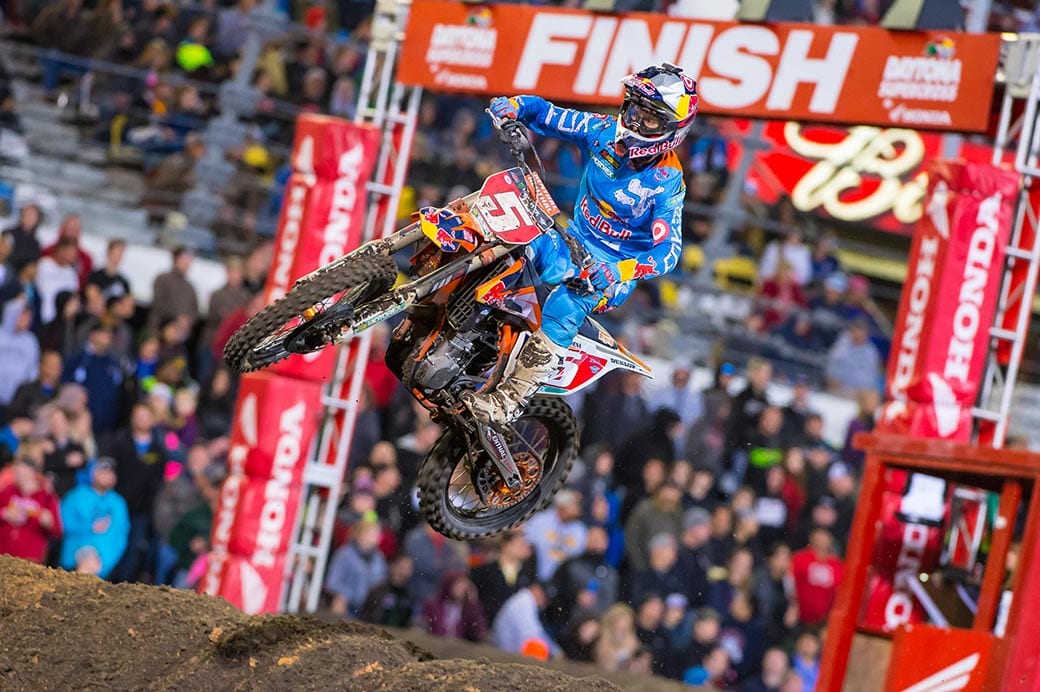 It’s almost hard to believe that Ryan Dungey only won one race in Daytona – also a one-off for KTM as it goes. Dungey’s victory came in 2015 as he just about held off a hard-charging Eli Tomac who worked his way up to within four seconds of the Dunge after starting from outside the top eight.

After moving from GEICO Honda to the Monster Energy Kawasaki team, Tomac went one better in 2016 and has won every Daytona – bar one – since! The other? Justin Brayton won his only supercross Main at Daytona in 2018… 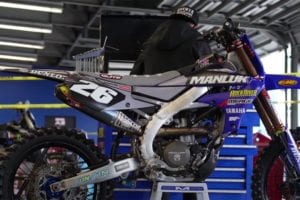 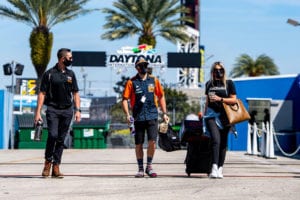 Never give up attitude pays off again for scrappy Supercross racer 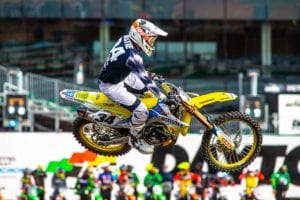 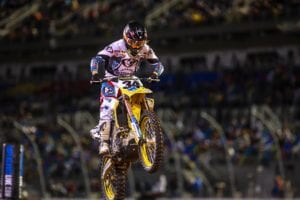 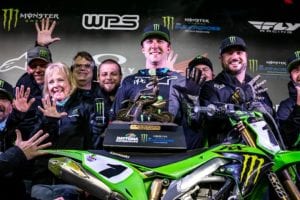 Eli Tomac defiant after his history-making win at Daytona