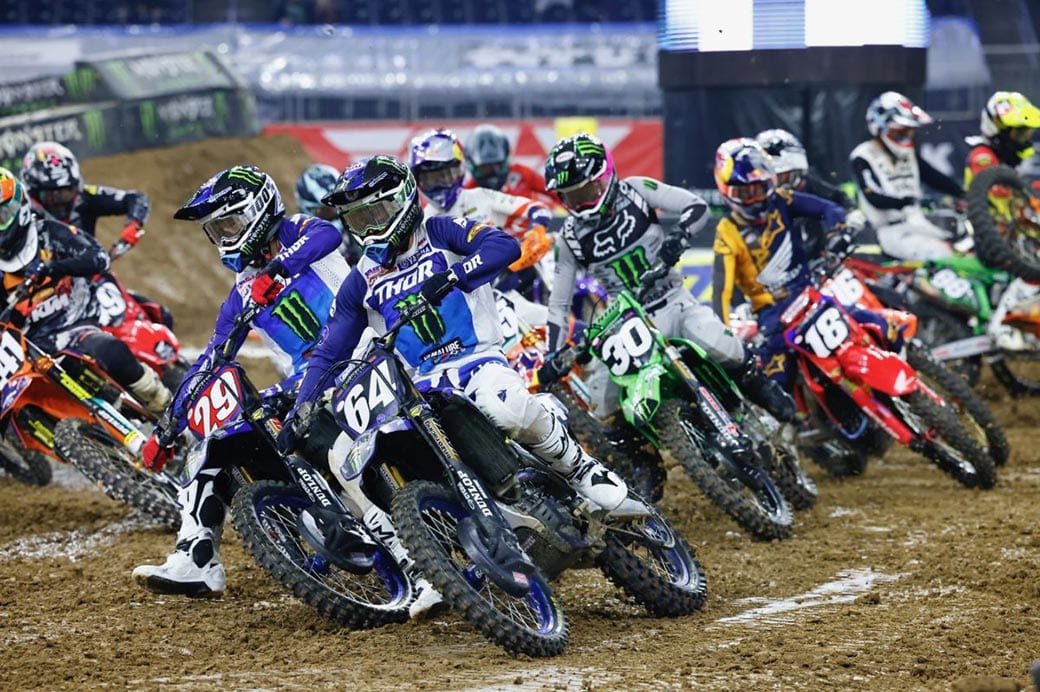 The team’s third-consecutive double podium at the opening rounds of the Monster Energy AMA Supercross season puts the pair tied in the 250SX East standings with 70 points.

Once again, Craig was the man to beat in qualifying as he stayed on top of the timesheets in the 250 class. With Nichols qualifying third, they lined up for the same Heat race. Both riders didn’t get off the gate like they hoped to, but the Californian fought his way back to take his second Heat win of the week while Nichols recovered from 13th to third.

In the Main Event, the Monster Energy Star Yamaha Racing duo got the start they needed with Craig grabbing the holeshot and his team-mate slotted right behind him. The Houston 1 winner tried to put on a disappearing act, but Nichols kept him in sight.

At around two minutes to go, the Oklahoman made his move as the pair came into some lapped traffic and moved to the front.

Craig countered back shortly after, using his strength in the whoops to retake the lead.

Hungry for the win, Nichols took back the lead a couple laps later and this time held onto it all the way to the chequers to end a two-year win drought and score his second-career victory in the class.

Team manager, Wil Hahn, said: “It was another great night for us in the Main Event for us. I think going to Indy with two red plates is a pretty surreal feeling. It’s good for the team and good for Yamaha all the way around. I think we just got to keep these guys focused on themselves and keep them rolling forward like we did tonight for the Main Event. It was honestly just like another Monday at the test track for us. It was really fun to watch.”

Colt Nichols: “It felt just like another day at the Yamaha test track out in California with me and Christian just kind of trading laps. I got a good start. I’ve been struggling with my starts all day, so I’m glad we turned that around. I really just tried to be patient. I knew where he was a little faster, so I tried to pick up on a few lines.

“It felt great to finally get a win. It has been a while so I’m going to soak it in. It’s awesome to have the red plate, me and Christian will be sharing it so that is cool for the team. I’m looking forward to Indy and ready to keep the momentum rolling.”

Christian Craig: “Houston 3 went pretty well. I qualified fastest again which was great. In the Heat, I don’t know how but I was in third gear so I had a terrible start. I worked my way up from almost last to win it.

“In the Main, I led most of the laps but Colt was right on me the whole time. He ended up getting me with a few laps to go. I was bummed but nothing I can do now but learn from my mistakes and keep trying to get better.”

On January 30, the team begins another Monster Energy AMA Supercross tripleheader at Lucas Oil Stadium in Indianapolis, Indiana, with both riders sporting the red plate at Round 4 of the championship.