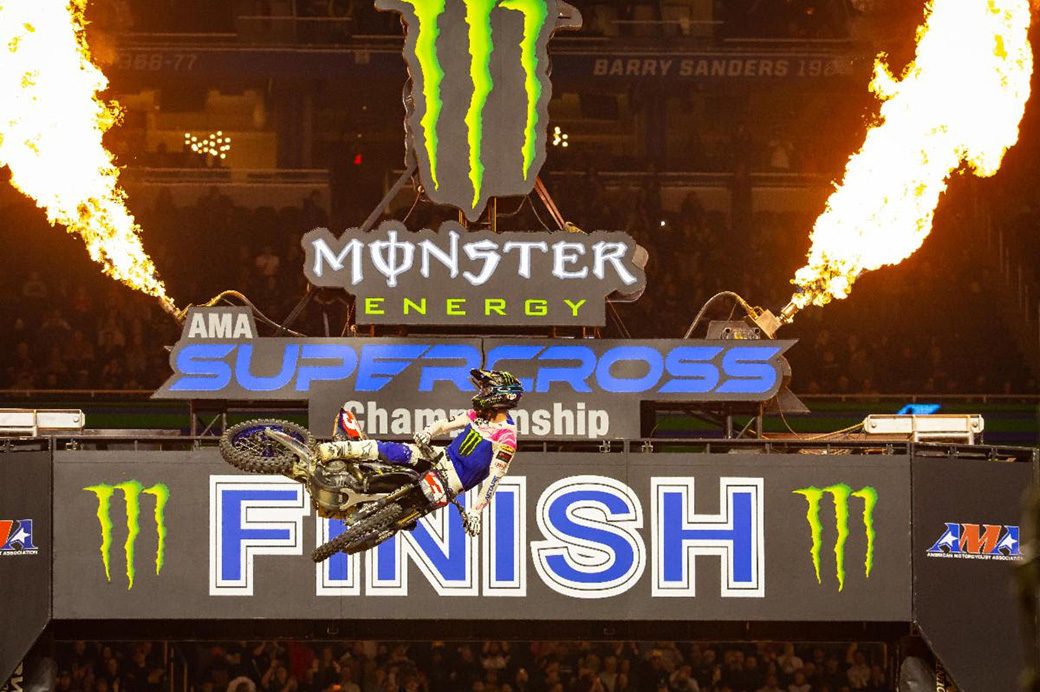 Monster Energy Star Racing Yamaha’s Eli Tomac took the win in front of 47,043 fans in a wild race that will be re-watched for years to come.

At Ford Field Tomac became the first rider in the 2022 Monster Energy AMA Supercross Championship to win three races in a row; he stretched his points lead to 42 after 10 rounds of the 17-round series. 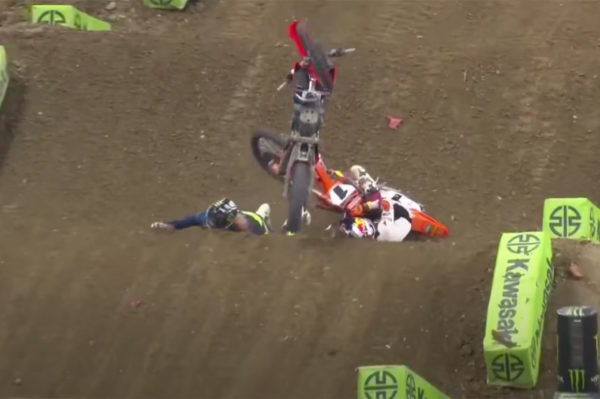 After SGB Unlimited Honda’s Cade Clason grabbed the holeshot, Twisted Tea Suzuki’s Justin Bogle jumped into the early lead in the 450SX Main Event with Red Bull KTM’s Marvin Musquin right behind. Bogle maintained the top spot through the early laps with Musquin close, Justin Barcia sitting third, Red Bull KTM’s Cooper Webb holding fourth, and Monster Energy Kawasaki’s Jason Anderson in fifth. Just over two minutes into the 20-minute plus one lap race Barcia pushed his way past Bogle. Anderson and Webb were by soon after that while Eli Tomac was up to sixth after a mid-pack start.

Less than five minutes in, Anderson got by Barcia in the whoops. A lap later it was Tomac passing in the whoops, this time blitzing past Webb for third place. One lap after that Tomac repeated the move on Barcia, putting him into second place. At the race’s midpoint Eli Tomac took over the lead, Anderson counterattacked from second, and Malcolm Stewart rounded out the top three.

The tacky, rutted track had created plenty of drama and crashes in the heat races and LCQs, and at this point in the race it began to dramatically impact the racing and title points standings. Team Honda HRC’s Chase Sexton caught Cooper Webb. Then Webb shorted a jump out of a corner and Sexton landed on him. Both riders went down in a brutal tangle. Sexton was out, Webb slowly remounted and valiantly tried to ride laps with his left arm tucked against his chest. He was hurt but doing what he could to salvage points.

Shortly after, Anderson washed out his front end in a corner entrance. He remounted, then pulled off down the next straight after realizing he’d been too injured in the crash to continue. Just a couple laps later, Monster Energy Star Racing Yamaha’s Dylan Ferrandis ran into trouble and pulled out of the race. In the closing laps, Musquin made a charge for the final podium position, but the track got its final say in the results as Musquin washed out his front wheel in a bowl turn and lost his chance for a spot on the podium.

The chaotic race was a thriller, and one surely to be watched again and again over the years as one of those sporting events that stands out as a wild and unique race. It resulted in a huge mix-up in the points, granting Tomac a seemingly insurmountable lead. Only time will tell which riders will be recovered enough to line up on the gate next weekend at the Indianapolis Supercross. 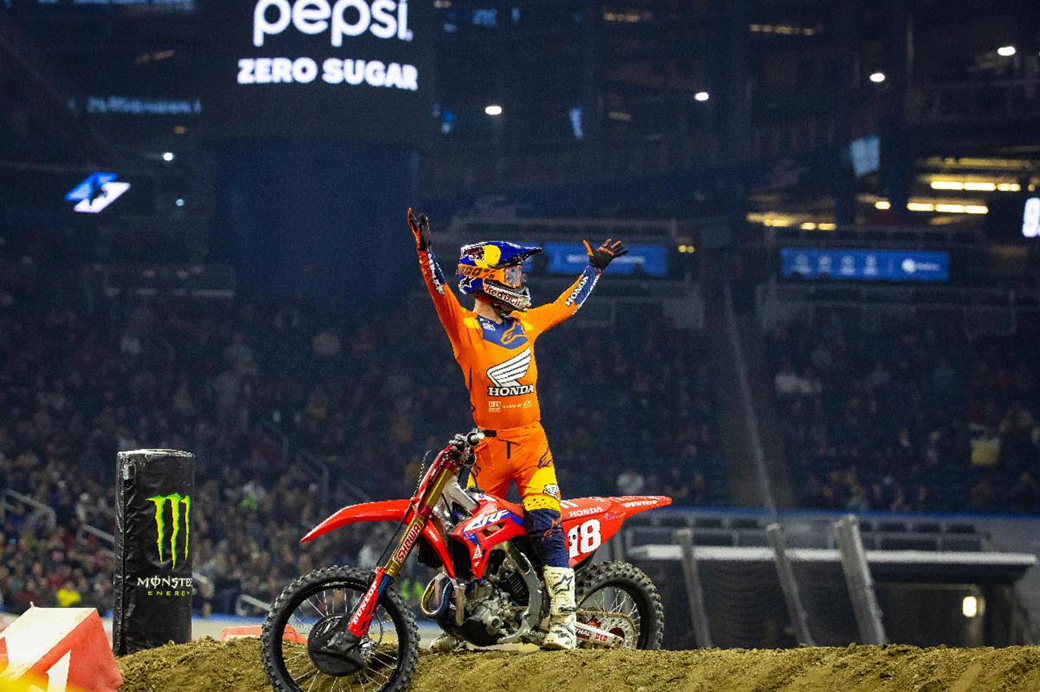 When the gate dropped in the Eastern Regional 250SX Class Jett Lawrence was credited with the holeshot but Rockstar Energy Husqvarna Factory Racing’s Stilez Robertson jumped past into the lead.

The two battled for the opening laps with Lawrence taking over the spot for good at the end of the first lap. Troy Lee Designs Red Bull GASGAS Factory Racing’s Pierce Brown was next to get around Robertson with Monster Energy Pro Circuit Kawasaki’s Cameron McAdoo getting past and into third before two minutes ticked off of the clock in the 15-minute plus one lap race. 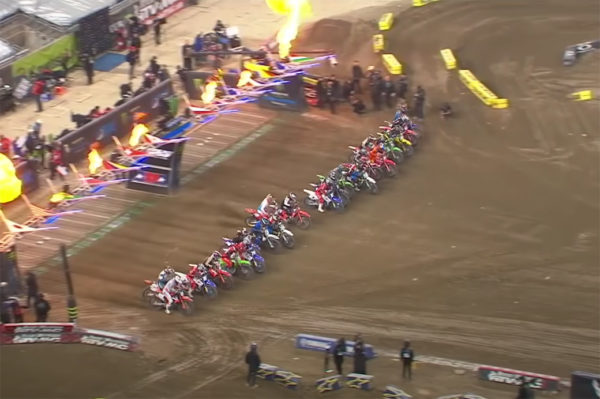 At the race’s midpoint, Brown was slowly chipping away at Lawrence’s three-second lead. Then a lapped rider prevented Lawrence from jumping the finish line and Brown was on the Honda’s rear wheel.

After some close battling Lawrence inched away as McAdoo caught Brown’s rear tire. With just over four minutes left on the clock McAdoo took over second but wasn’t able to close on Lawrence.

The finish extended Lawrence’s points lead to 8 after four rounds of the 9 round regional series.

The series now heads to Indianapolis for another exciting Saturday night of racing inside Lucas Oil Stadium on March 19th. 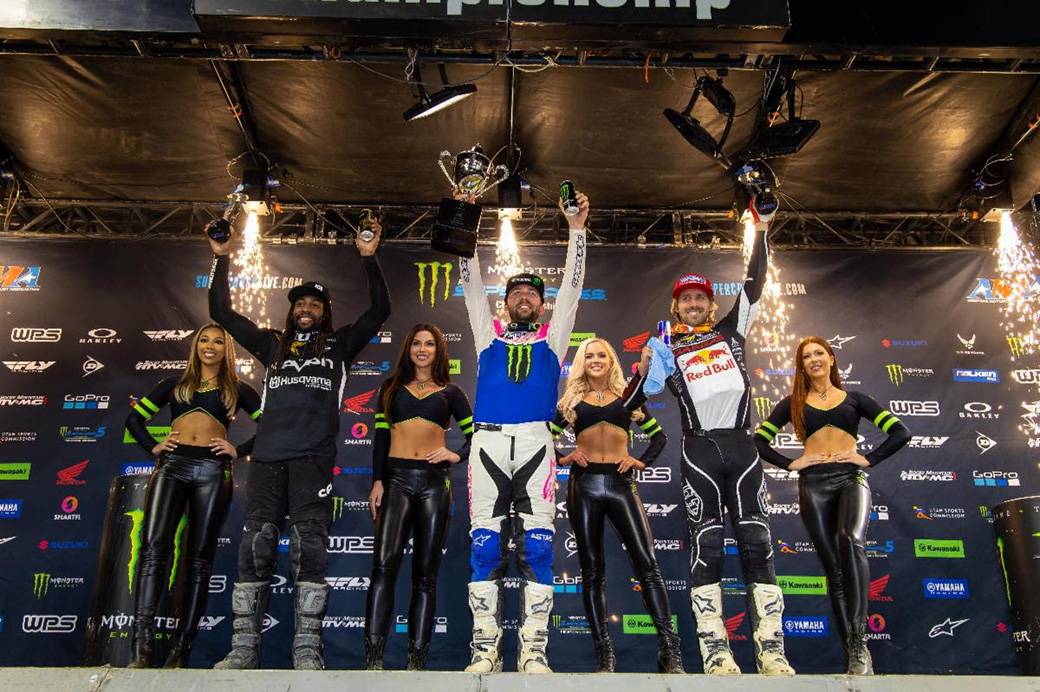 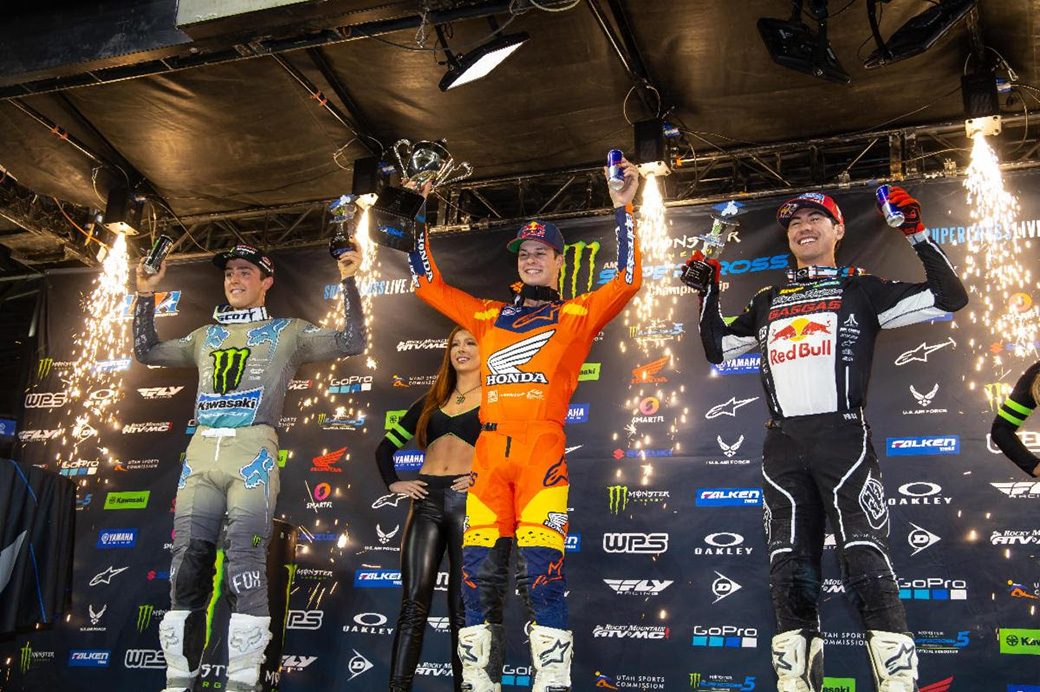