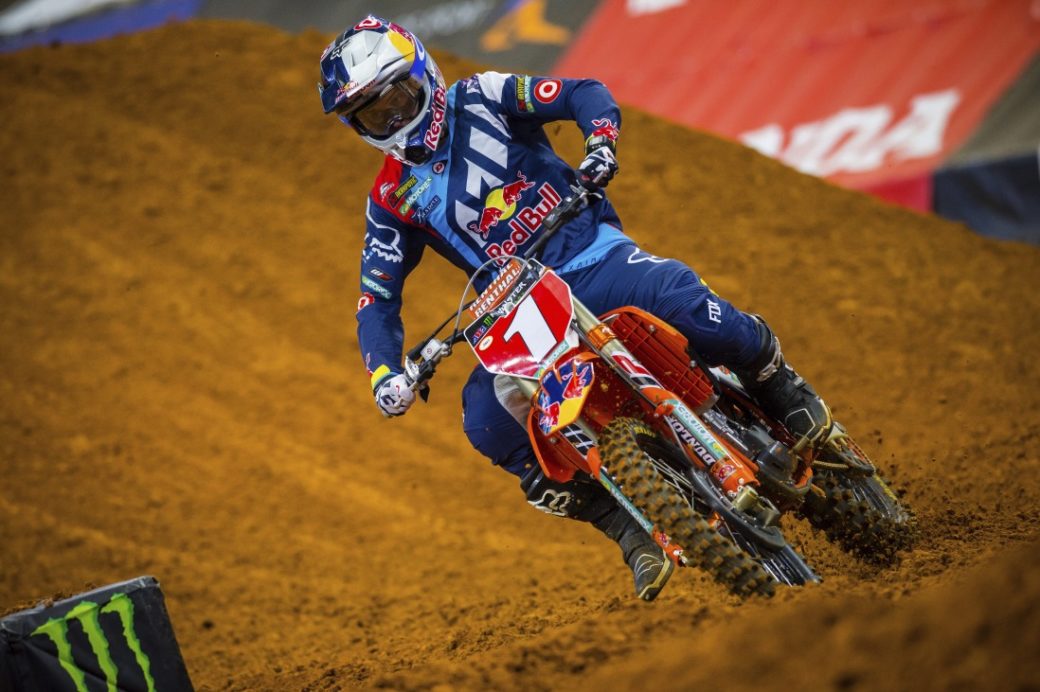 While our homegrown indoor AX tour concludes in London this weekend the Monster Energy Supercross series has only just passed the one-third mark following round six in Arlington, Texas, on Saturday night.

At first glance it looks like business as usual with three-time champion Ryan Dungey leading the way as his bids for his fourth crown and third title in a row – but appearances can be deceptive.

As in previous seasons Dungey’s consistency is proving to be key but while this time last year the Red Bull KTM rider had backed up two second-placed finishes with four wins, this time around he’s only won once.

After a bad start Dungey’s fourth-placed finish in Texas actually allowed him to extend his series lead to 18 points as Musquin and Cole Seely (Honda HRC) moved up to second and third at the expense of Tomac who slipped to fourth.

“We caught a couple breaks to move into fourth,” admitted Dungey, “and all-in-all we made up some ground in the big picture.”

After coming within a few turns of taking his first 450SX win in Atlanta last year, Musquin – a two-time world MX2 champion – finally took the top step of the podium.

“I was super calm,” said the Frenchman. “I was trying to stay relaxed and not put any pressure on myself. I had a great start and was basically pacing myself with the guys behind. I was looking behind and the gap was pretty good.”

The night’s big loser was Tomac who was holding third and closing on second-placed Seely when his front wheel washed out after the triple. Following an extended trip to the mechanics’ area to have a front brake problem fixed he re-emerged three laps down with his brake hose cut and was eventually credited with six points for 15th.

“I felt pretty strong until my front end issue,” he said. “I knew that recovering as best as possible could be key at the end of the championship so I dug deep and fought all the way to the end. It’s a long season and we still have a lot of laps left.”

With 11 rounds to run Tomac is now 29 points behind Dungey.