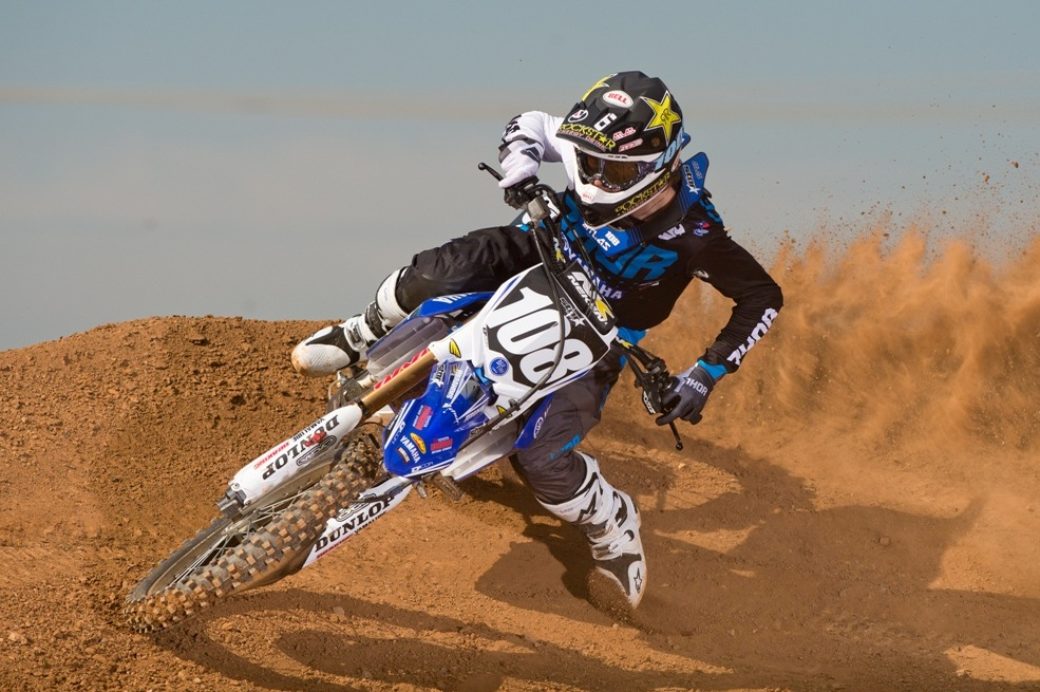 If there were one nation that could possibly challenge the United States in the Supercross game it would be the French.
Our friends across the channel have been the only European country to consistently produce talent ready to succeed in America and excel in Supercross.

Jean Michel-Bayle, Mickael Pichon, Sebastien Tortelli, David Vuillemin, Christophe Pourcel and Marvin Musquin have all made the move across the pond and carved highly successful careers for themselves.

In 2017 a new name is looking to join that illustrious list of racers.

Dylan Ferrandis enjoyed a successful – and at times controversial – career racing Grand Prix motocross in which he claimed multiple podium finishes and overall wins, took home the chamberlain trophy at the 2014 MXoN and was the only man with the potential to put a stop to Jeffrey Herlings’ domination on any given weekend.

However, a plague of injuries prevented Dylan from realising his full potential in the MX2 class. It was no secret that the outspoken

22-year-old dreamed of making the move to the United States.

And for the 2017 season the Frenchman decided to take the plunge into the world of Supercross racing with Star Yamaha, packing up everything in Europe and making the trip across the pond to live the Californian dream.

“It’s very cool here. This is clearly the place to be for our career in Supercross,” said ferrandis.

“I really enjoy the motocross spirit we have here in California, so I’m happy to have moved away from home for that.

“The food here is difficult for me, it’s not so easy to eat well and eat healthy.

“You can eat healthily but it’s just difficult for me to find the food and products that I would typically eat in France.

“But I just need to learn to adapt. It is getting better, every day we learn and overall it’s just a great experience,” added Dylan in between rides at the Lake Elsinore SX practice track.

It wasn’t a surprise for many to read that Ferrandis would be racing in the states for 2017 –  however it may have been a surprise for some to learn what team he would be representing. Many assumed that the logical move for the former Monster Energy Kawasaki MX2 pilot would be to join Mitch Payton’s Pro Circuit Kawasaki squad.

However, Ferrandis made it clear that he definitely no longer wanted to be racing the green machines. This left GIECO Honda or Star Yamaha as the two best.

With the knowledge that they would be losing both Cooper Webb and Jeremy Martin for the 2017 season Star Yamaha quickly snapped up Ferrandis, signing him to a two-year contract.

This seems like a great move for the Frenchman.

The Star Yamaha team are on a roll at the moment having claimed the 250 national title three years running, as well as the 2015 and 2016 west coast Supercross championship.

These bikes are fast and the Star Yamaha team have most certainly joined Pro Circuit and GIECO Honda in the elite leagues of the 250 class.

Dylan seems to be gelling with the team well, adding: “The team is really cool with me. I really enjoy spending time with all the guys, they are all super nice.

“And the bike is crazy fast, it’s so good. I felt great on it right away. Overall I’m feeling really positive about the team.”

The leap from GP racing to the AMA scene is a big one, with many European stars over the years failing to stick the landing. Supercross riding is an art that even the world’s top talent find difficult to come to grips with.

After watching Dylan struggle during his first day on the SX track, avoiding the whoops and looking timid around the rest of the course you’d be fooled into thinking that the former Grand Prix winner was in over his head.

Just two short weeks later, though, he was almost unrecognisable as he commanded the track in confident fashion.

“As of today I’ve only been riding Supercross for two weeks,” he said.

“I’ve been feeling good but it is really difficult.

“I feel like it is coming, my riding hasn’t been so bad. I train with all the Swannie (Gareth Swanepoel) crew so that’s cool and I’m starting to feel good. Today I feel a little stiff, the supercross tracks are difficult at the moment after all the rain we’ve had in California over the last few days.

“But like I say I just need to learn and spend time on the bike.”

As we chatted with Dylan at Lake Elsinore the day prior to the Anaheim 1 season opener he still had a few weeks before his east coast season opener in Minneapolis, Minnesota to learn, improve and get race ready.

Ferrandis will be lining up next to seasoned 250 class Supercross racers such as Adam Ciancirulo, Joey Savatgy, Christian Craig, Alex Martin and Jordon Smith.

He will most certainly have a tough task ahead of him and although he is quietly confident he refuses to put too much pressure on himself.

“Honestly it’s difficult to give myself a goal,” he admitted.

“However, if I only make the podium or only get a top five I will still be happy.

“If I finish outside of the top five, though, I will be super angry.

“Like I say I just need to learn and see where I am.

“I’ve never raced supercross so I will just have to see.

Dylan only needs to look up into the 450 class, in which his fellow Europeans consistently take up two steps of the podium, to see where he could be if this works out.

He added: “I train with Cooper (Webb) so I’d like to see him win but I know he has to race against a lot of really fast guys. So it’s definitely not going to be easy for him, but I hope Cooper is going to ride well.”

Ferrandis had a publicly-displayed rocky relationship with MXGP and the strong-willed Frenchman certainly wasn’t afraid to voice his opinion on a variety of subjects.

“Like I said the spirit here in California is very different. For example, every factory team and all the important people in the motocross industry are based here in SoCal.

“It’s good to be here and to be part of that. In Europe everyone and everything is so spread out and separated. Quite honestly, I don’t miss the GPs.”

And when asked if a GP return could ever be on the cards Ferrandis added: “The plan for now is to stay here in the USA for the rest of my career.”

Will this be another European success story?