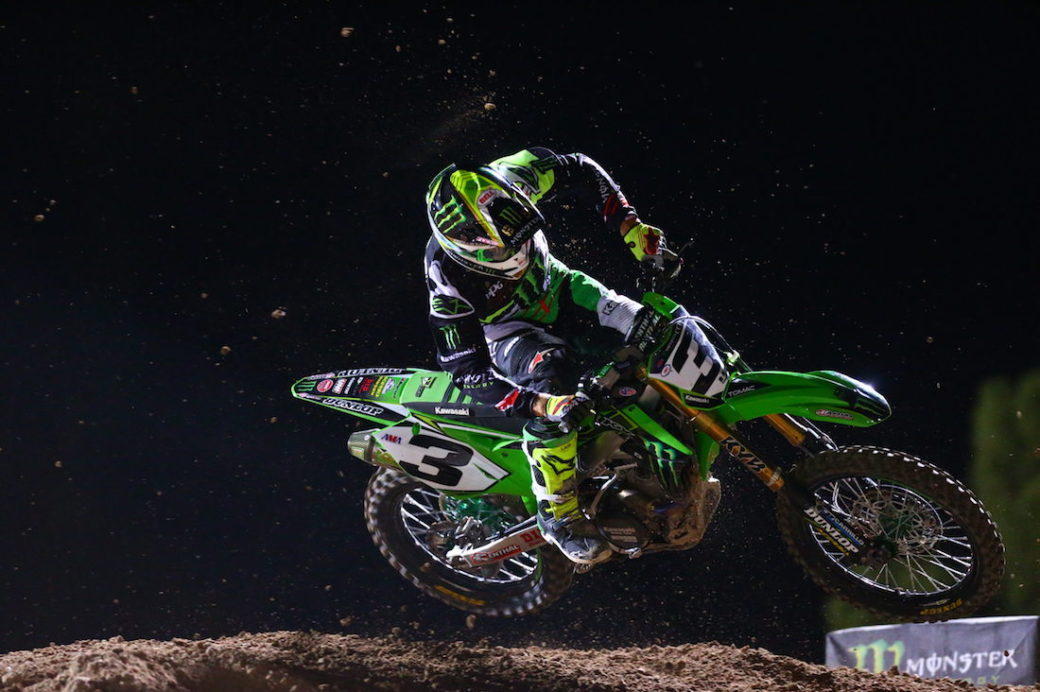 Kawasaki’s Stilez Robertson out-duelled the competition in a dramatic finish to win the Supermini Class. Rocky Mountain ATV-MC/WPS/KTM’s Blake Baggett was quick out of the gate and grabbed the Toyota holeshot by leading the star-studded field through the opening turn of the first Main Event in the Monster Energy Cup Class.

Team HRC Honda’s Ken Roczen was in hot pursuit, followed by Tomac, Red Bull KTM’s Ryan Dungey and Smartop MotoConcepts Racing’s Mike Alessi. Roczen instantly attacked Baggett and made quick work by taking over the lead on the opening lap. Once into the lead, Roczen set a blistering pace and began to distance himself from the competition that battled for the remaining podium spots behind him.

Tomac used the entire course as he searched for a way around Baggett, eventually making the pass stick on Lap 2. On the ninth lap, Roczen went through the joker lane, a slower section of the track that every rider must take at least once after the first lap, but maintained his lead as Tomac followed him through.

Roczen held on to grab the first checkered flag of the night, followed by Tomac and Dungey in second and third, respectively. Red Bull KTM’s Marvin Musquin charged hard to make several passes for fourth, while early race leader Baggett settled for fifth.

“It was a good first race with the HRC Honda Team, I’m happy with how the bike worked on the start and on the track,” said Roczen. “I’m looking forward to the rest of the night and seeing what we can do.”

The second Main Event witnessed Roczen jump out to the early lead by grabbing the Toyota holeshot, narrowly edging out Tomac, Reed, Dungey and Alessi.

As the lead duo pushed one another at the front of the 18-rider field, Dungey made an aggressive pass to overtake Reed for third on the opening lap. Roczen continued to set the pace at the front, but Tomac kept him within striking distance, however, disaster struck for the defending Monster Energy Cup Class Champion and Roczen suffered a horrendous crash on Lap 7 that forced him to retire from the race early.

Roczen’s misfortune allowed for Tomac to inherit the lead. Tomac cruised to win the second race of the night with Dungey second and Musquin third.

Reed was credited with fourth, while HRC Honda’s Cole Seely rounded out the top five.

“I came in with a little bit too much momentum on the start and it cost me the holeshot,” said Tomac. “It was unfortunate to see Ken [Roczen] go down, we laid down a quick pace early and yoyo’d each other back and forth.”

Mumford started the second and final Main Event of the Supermini Class with the Toyota holeshot as Jack Rogers and Robertson followed in second and third, respectively. Robertson made short work of Rogers to move into second, followed by first race winner Hammaker in third.

The lead trio engaged in an intense battle for the race lead. Robertson forced his way past Mumford for the number one position on the third lap, but Mumford remained glued to the Kawasaki’s riders rear wheel and began searching for a way back around.

At the finish, Robertson held on to take the win, narrowly edging out Mumford in second. Joshua Varize took advantage of a late race crash by Hammaker to finish third. Robertson took the overall win via 2 -1 scores, while Mumford was second (3 -2) and Aiden Tijero (4 -5) rounded out the podium in third.

“It was tough, I didn’t get off to as good of a start in the second race,” said Robertson. “The entire race was a battle with Carson [Mumford]. We stuffed each other back and forth several times for the win, but I was able to make a pass stick in the closing laps.”

The final Amateur All-Star Main Event began with Mcadoo claiming his second Toyota holeshot of the night, ultimately sweeping the holeshots in both Main Events to win a brand new Tacoma truck courtesy of Toyota. Mcadoo led wire-to-wire for the race win with Jayce Pennington second and Dylan Walsh third. Mcadoo’s 7 -1 scores eluded him to the overall win.

Tennant took the runner up position (2 -6) and Garrett Marchbanks rounded out the podium (6 -4). “Tonight I was able to grab two strong starts and it paid off,” said Mcadoo. “I had a similar downhill start setup that I practiced during the week. I’m stoked to walk away with a Toyota truck and the overall win tonight.”

Reed powered his way to the to the Toyota holeshot in the third and final Monster Energy Cup Class Main Event of the night, while Alessi, Roczen, Seely and Musquin gave chase. Alessi gained control of the race early and Reed made a critical mistake on the opening lap that saw him hit the deck and move Dungey into the top five.

Tomac was buried in the pack and circulated the opening lap in 10th place. Alessi rode brilliantly as he clicked off lap-after-lap, opening a small lead as the competition swapped positions behind him.

Roczen began to slowly chip away at Alessi’s lead and eventually made the pass for the lead on Lap 4. Musquin bumped his way into second, followed by Dungey just one lap later.

Tomac was on a mission as he carved his way through the talented field and moved into fourth on Lap 6. As Roczen continued to lead, the battle for the overall win was shaping up to go down to the wire between Dungey and Tomac. On Lap 7, a slight bobble by Dungey allowed Tomac to jump to the inside and make the pass for third. Roczen and Musquin elected to take the joker lane on the ninth lap, while Dungey and Tomac waited until the final lap. Dungey was hot on Tomac’s heels and made the pass towards the end of the final lap to retake third.

Roczen impressively rebounded from his crash earlier in the night to cross the checkered flag for his second race win of the night. Musquin took second, just ahead of Dungey, Tomac and Alessi, who rounded out the top five. Tomac edged Dungey out by one point for the overall win (2 -1 -4) on the night. Dungey was second (3 -2 -3) and Musquin third (4 -3 -2).

“It was a crazy race and I did not make it easy on myself with a terrible start,” said Tomac. “I knew going into the race that I just needed to finish behind Ryan [Dungey] and I was able to catch up to him and have a good battle before settling on the last lap. I’m really happy with tonight’s performance and looking forward to the next season.”