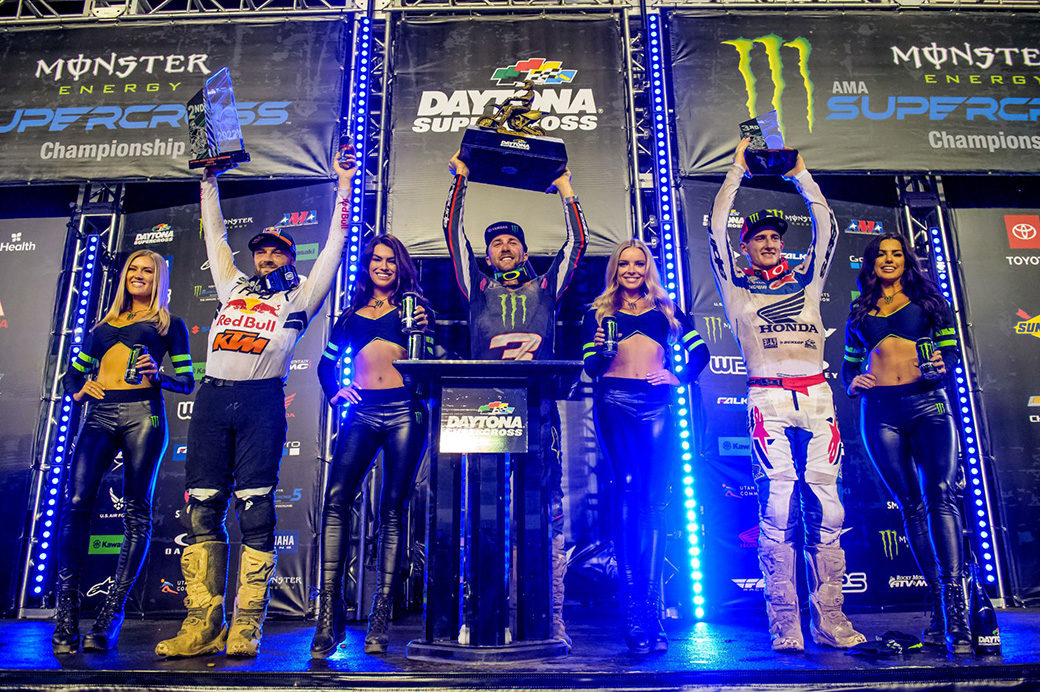 Tomac and the team worked throughout the day to dial in the setup for another challenging supercross track in front of the famous stretch of banking at the Daytona International Speedway. He qualified fifth and finished fourth in his heat race. In the Main Event, the points leader got off to a great start and was battling up front, but it was chaos on the first lap as riders jockeyed for position and made contact. Tomac kept it on two wheels and was sitting third with his eyes set on closing the gap to second. He made the pass on Lap 7 and then reeled in the leader. It was a thrilling battle with the defending 450SX Champion, and as the clock started to run out, Tomac claimed the lead and rode away in the final laps to a 5.2-second margin of victory.

His sixth win at the 52nd edition of the Daytona Supercross made history by breaking Ricky Carmichael’s record and made Tomac the winningest rider at the iconic venue. It also marked his fourth victory of 2022 and extended his lead in the title chase to 18 points as the series heads into the second half of the 17-round season.

Eli Tomac: “It’s unbelievable to get win number six, and it was everything I wished for!

“It was a tough day, though. I was having a little bit of a tough time with the track earlier in the day, but once the lights came on, it was like I flipped a switch, and it was game on. Me and Cooper (Webb) rode wire-to-wire for most of the race. We were going back and forth around the different parts of the track on being the better guy, and I was able to capitalize on him being stuck behind a guy and made the move. I put myself in the position for that move, though, and just went on from there. It was such a cool night for us.”

After a tough few rounds, Dylan Ferrandis bounced back with a good outing in Daytona Beach, Florida. He qualified sixth behind his teammate and then got off to a good start in his heat race and took a runner-up finish. The Frenchman backed that up with a top-five start in the Main Event and kept pushing in the challenging conditions, making his way to fourth with six laps remaining. He continued to put in some fast laps, but unfortunately, there was not enough time to close the gap on third and ultimately finished fourth.

Team manager Jeremy Coker: “It was a very good night, but opposite of what we normally do. Our day was not as strong as usual, but that’s fine. We don’t need to perform during practice and qualifying, we need to gain experience and knowledge throughout the day for the nighttime, and we did that today. We made a lot of changes throughout the day with Eli, and the suspension guys got him dialled in and happy. So, everything went well. We capitalised on the night and made history, and that’s pretty awesome.

“Dylan rode a phenomenal Main Event, it’s just unfortunate that he couldn’t quite get that podium, but it was a good ride and a step in the right direction.”