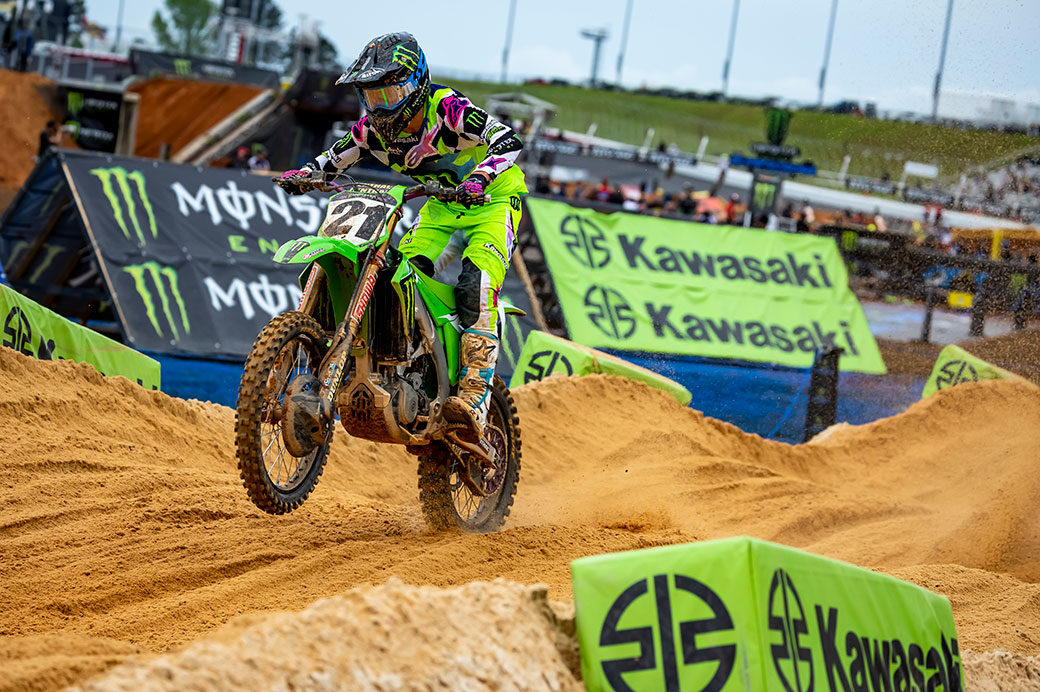 Round 14 of the Monster Energy AMA Supercross Championship brought riders from across the country to Atlanta Motor Speedway for a unique racetrack in the infield of the iconic racing venue.

Monster Energy Kawasaki rider Jason Anderson claimed his fourth win of the season with a commanding performance in the 450SX Main Event.

Anderson and the rest of the Monster Energy Kawasaki team arrived to Atlanta Motor Speedway on Saturday morning to find the grounds flooded from overnight rainfall. As the rain continued through the morning hours, scheduling adjustments were made to preserve the track. The revised schedule granted the riders in each classification a single 13-minute timed qualifying session prior to the start of the racing program. Adding to the challenge of learning a track in such short time, the specially designed Atlanta circuit hosted one of the longest starts in Supercross history, multiple whoop sections and over twelve turns, altogether producing the longest lap times so far this season. Knowing his time on the track was limited, Anderson launched straight out to a high pace on lap one of the timed session. The No.21 KX450SR rider battled at the top of the leader board for the entire session as he made the most of the slick conditions. When the session concluded, Anderson recorded the second-fastest time of the morning with a 1:25.286.

At the start of the first 450SX Heat Race, Anderson emerged from the first turn in second position. With dryer track conditions and increased traction, Anderson quickly turned up the pace from his qualifying laps and took control of the lead before the end of Lap 1. The New Mexico native responded to pressure from the current points leader by improving his lap times as the race progressed. There was a brief exchange for the lead position on Lap 5 before a crowd animating pass while sliding around the inside of one of the track’s sweeping 180 turns moved Anderson back into the top spot. When the chequered flag flew, Anderson was over four seconds clear of the competition, claiming his fifth heat race win of the season.

When the gate dropped for the 450SX Main Event, Anderson once again launched his KX450SR out to the front of the pack. The podium positions were tightly contested for the opening laps as Anderson tactfully moved passed his main championship rivals. On Lap 3, Anderson gained control of the lead by capitalising on a mistake from the competition. The Atlanta crowd soon erupted again as Anderson took advantage of the clear track in front of him to start jumping an impressive triple-quad rhythm section before the finish line. Continuing to jump the rhythm lap after lap, igniting the crowd consistently, Anderson steadily built a sizeable lead over the riders behind. By Lap 11, the Monster Energy Kawasaki rider was more than eight seconds ahead of the closest competitor. With a nearly perfect race from start to finish, Anderson crossed the chequered flag first, lighting the Monster Energy fire cannons and securing his fourth Monster Energy Supercross win of 2022.

Jason Anderson: “It seemed like we might have a mudder this morning but, the dirt came around after the sun showed up around mid-day. By the time my Main Event started, the track was gnarly but, we’re in a great spot with the bike so I was able to keep pushing the pace through the tough conditions. Even though the whoops were cupped out and edgy, the bike was consistent and predictable, so I kept charging across them every lap. The whole team has put in a lot of effort to have the KX450SR working as good as it is right now so hopefully we can enjoy a few more of these wins before the season ends.”