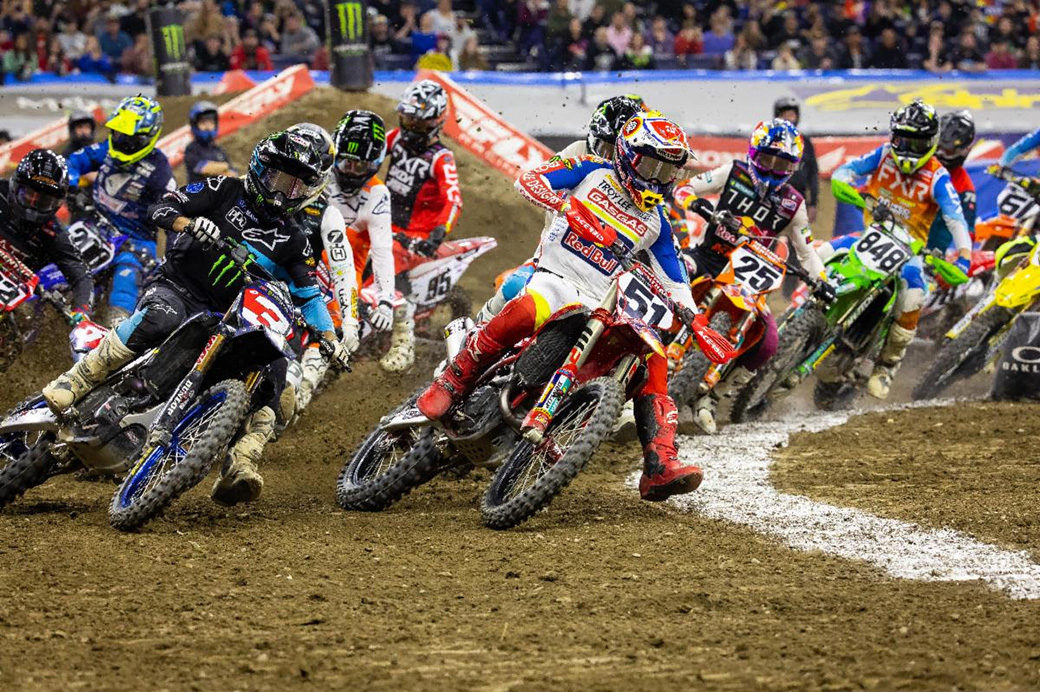 The headlines of two racers extending their win streaks are at odds with the thrills delivered at the Indianapolis Supercross, round 11 of the 2022 Monster Energy AMA Supercross series.

Tomac’s victory stretched his championship points lead to 48 and places him one win away from fourth on the all-time win list.

Troy Lee Designs Red Bull GASGAS Factory Racing’s Justin Barcia led for most of the Main Event and was on Tomac’s wheel at the end, but he had to settle for the runner up spot in Indy.

Red Bull KTM’s Marvin Musquin spent most of the Main Event with the lead in sight but only reached as high as third place to grab the final podium spot in the premier class.

The Eastern Regional 250SX Class served up another exciting race and Team Honda HRC’s Jett Lawrence captured the win, his fourth in five rounds of the division’s championship.

Justin Barcia jumped into the lead in the 450SX Class Main Event ahead of Monster Energy Kawasaki’s Jason Anderson, Rockstar Energy Husqvarna Factory Racing’s Malcolm Stewart, Tomac, and Musquin. In the early laps it looked like Tomac would slice his way to the front as he dove under Stewart, but Tomac’s forward progress stalled as the top five battled fiercely in a tight pack. As Anderson fought with Barcia, Stewart came back on Tomac to reclaim his spot. 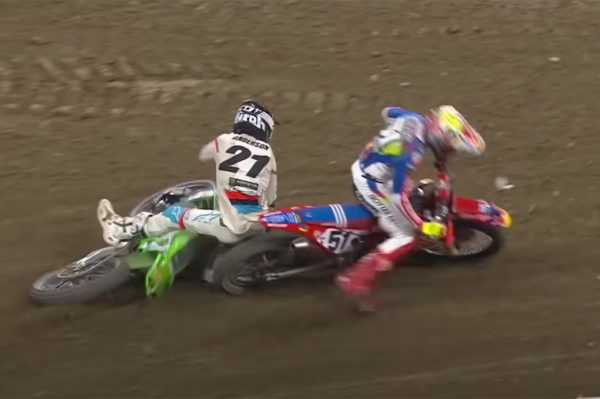 Barcia got off-plane in the whoops and Anderson took over the lead seven and a half minutes into the 20-minute plus one lap race. Less than a lap later Barcia cut across a tight right hand turn into Anderson. The riders collided, and Anderson went down and dropped outside of the top five. As Tomac got his turn to hound Barcia for the lead he found Musquin nipping at his own rear wheel. The top three riders fought for position, battled the deteriorating track, and strategized passes on lapped riders; only two seconds separated all three positions. When Stewart and Team Honda HRC’s Chase Sexton closed in, there were suddenly five riders with less than five seconds separating the group.

With just under five minutes left on the race clock Tomac jumped past Barcia and quickly pulled clear from a retaliation pass. Soon after, Stewart crashed hard, going over the bars after shorting a jump in the rhythm section. As Barcia made a final push to get Tomac, Red Bull KTM’s Cooper Webb did all he could to pass Sexton for fourth. At the chequered flag, Tomac took the win, his fourth in a row. Barcia was right behind in second, Musquin was comfortable in third, and Sexton held off Webb at the line for fourth.

Update: Justin Barcia has received a three-point penalty and a $3,000 fine from the AMA for his move on Jason Anderson in the 450SX Main Event. 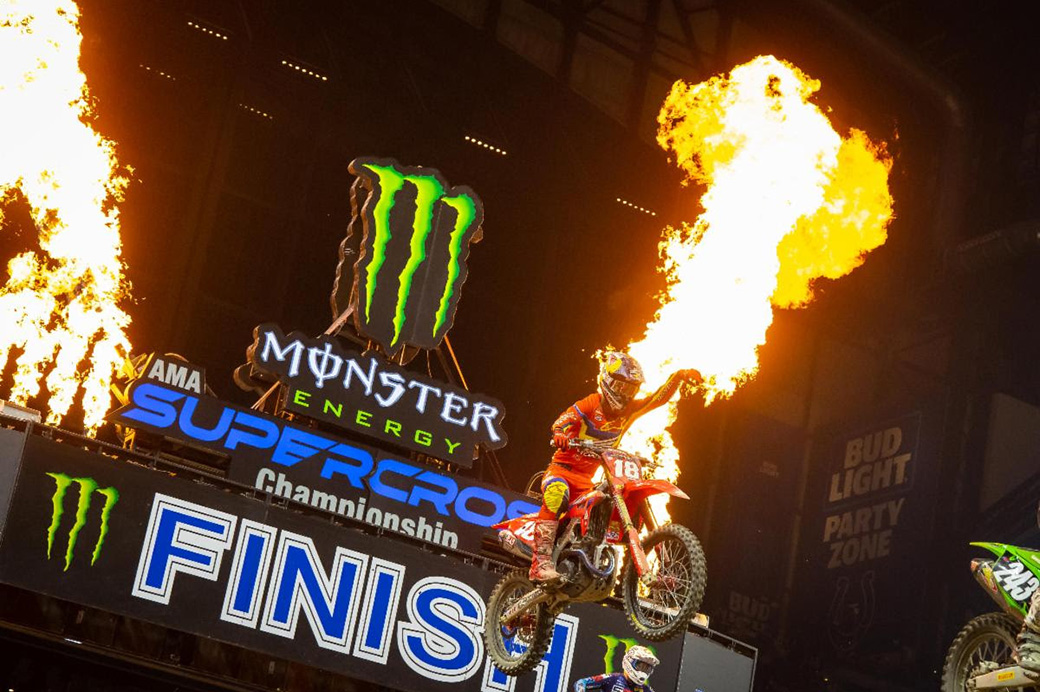 Initially Lawrence looked uncomfortable in the whoops and inconsistent in some of the rhythms while McAdoo was on his game. 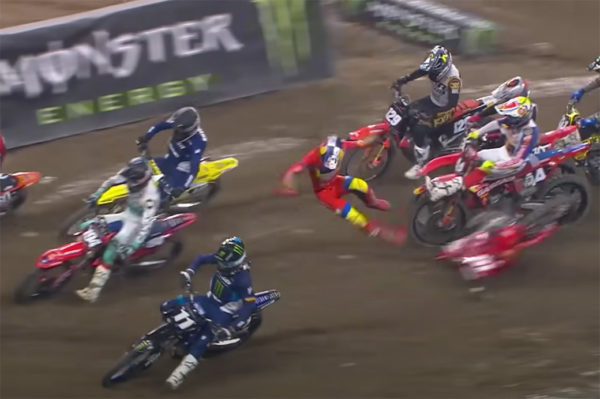 Two and a half minutes into the 15-minute plus one lap race McAdoo closed. A lap and a half later he pushed past Lawrence and into the lead. Then Lawrence found his flow and took the battle back to McAdoo.

At the race’s midpoint, Lawrence re-gained the lead and slowly stretched it from there to capture his third win in a row.

Behind them Brown reached third place but Rockstar Energy Husqvarna Factory Racing’s RJ Hampshire pushed past late into the race. The two were nearly side by side at the chequers but Hampshire held on for his first podium of the 2022 season.

The series now crosses the country to match the racers up again next Saturday night at Lumen Field in Seattle, Washington.

The open-air stadium looks, as of press time, to have clear weather for a round that has played spoiler to many racers over the years when rain mixed with Pacific Northwest soil to create DNF-inducing mud.

The round also brings the return of Western Regional 250SX Class racing for round seven of that division and round 12 of the premier 450SX Class. 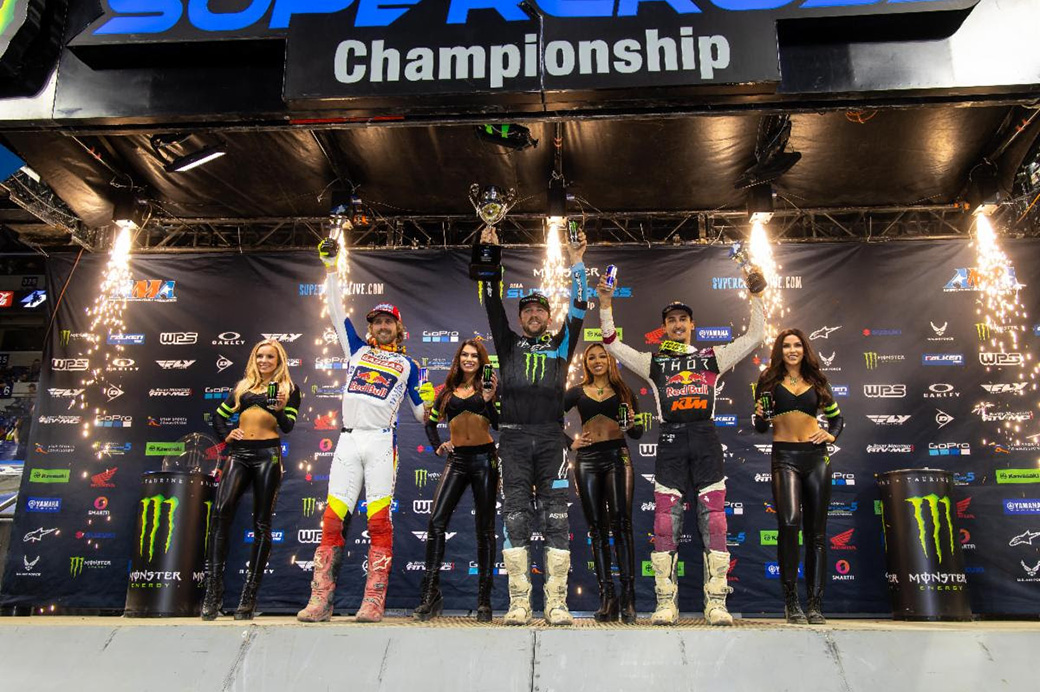 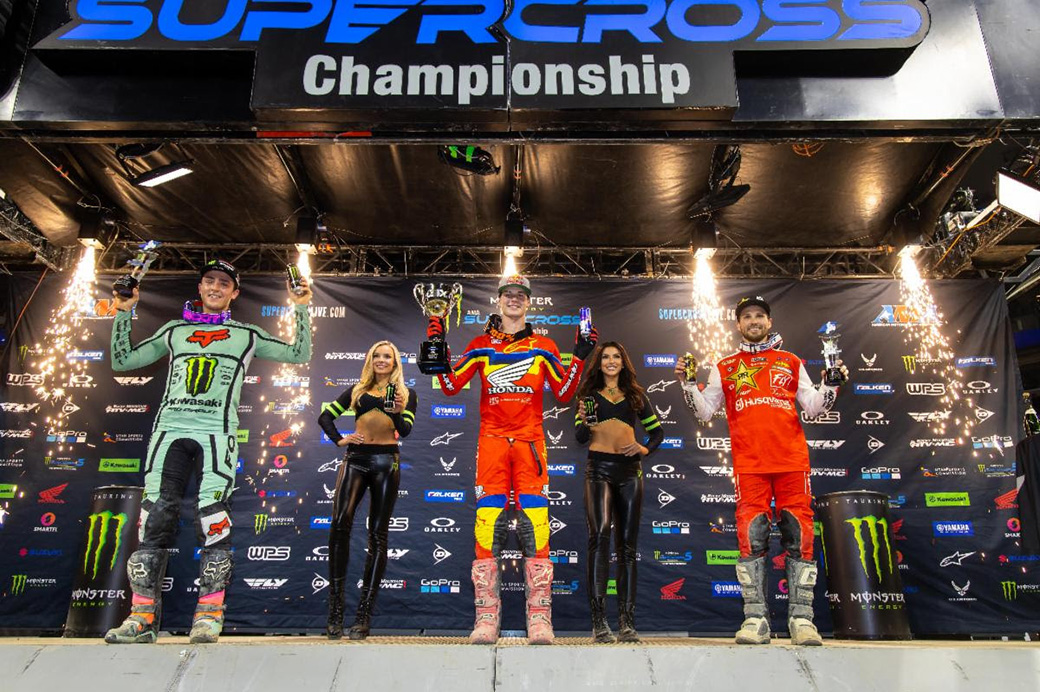