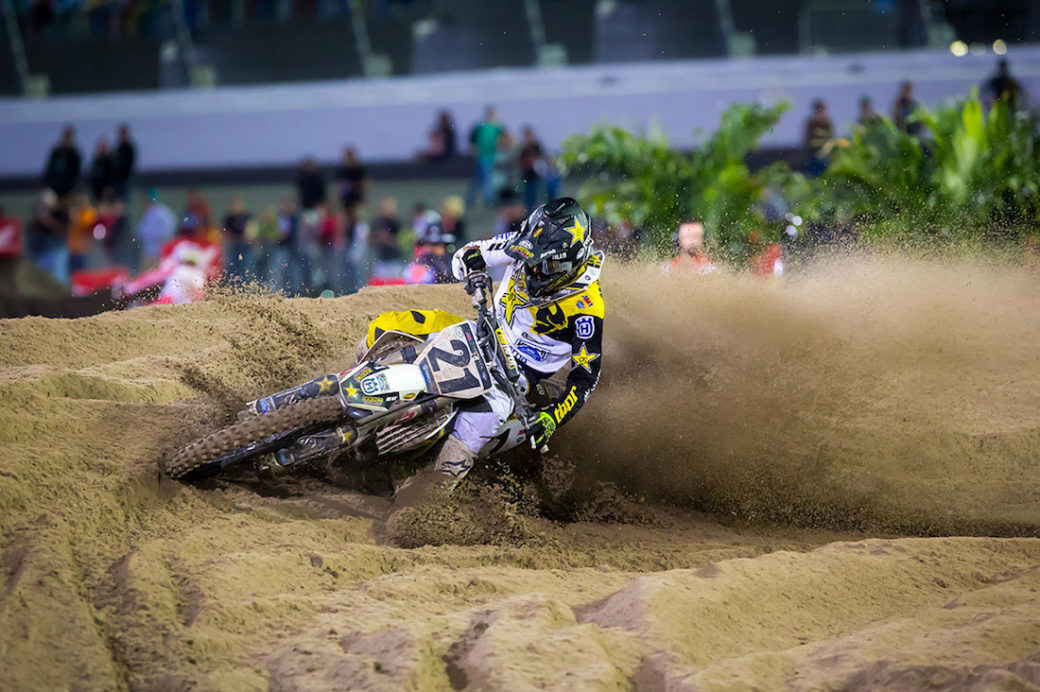 The Rockstar Energy Husqvarna Factory Racing Team traveled down South to the historic Daytona Supercross, held at the Daytona International Speedway, for the 10th round of the AMA Supercross series.

Jason Anderson put in serious work in the 450 class and was rewarded with his 11th career podium finish. Zach Osborne got a heat race win in the 250SX East class and followed it up with an epic battle through the pack in the main to finish fifth, while teammate Dean Wilson rounded the team out with a 13th in the 450 class.

Jason Anderson nearly got the holeshot at the start of his heat and immediately started battling to hold his position. He held strong to finish second and transfer to the 450 main. He had a difficult start in the main, but was seventh by the second lap. He then put on an impressive battle through the pack as he got into fifth, made the pass for fourth at the halfway mark, then continued to move ahead and put himself in podium position shortly thereafter. The impressive ride gave him a third-place finish, and he is currently fifth overall in 450 rider point standings.

“It was a pretty decent night,” said Anderson. “I was able to come from the back and get third. My starts were good earlier in the day, and I basically got the holeshot in my heat race. The start in the main was kind of like a freak accident—someone hit the gate at the start and we all just messed each other up. All-in-all, though, I feel like I’ve been going in the right direction. I’m pumped to get a podium here at Daytona.”

Zach Osborne got a top-three start in his heat, quickly pulled into the lead, and took the first win of the night aboard his Husqvarna FC 250. He got a top-five start in the main and settled into a fourth-place position by the second lap. He pushed ahead and made the pass for third in lap three and immediately set his sights on the top-two riders before going down in the corner of the sand section and remounting in eighth. He put his head down and started battling his way through the pack. He meant business as he continued to fight for position and put on an excellent race. He would eventually finish fifth. He still holds on to the lead in 250SX East rider point standings.

“Overall, it was a pretty positive day at Daytona,” said Osborne. “I wasn’t the fastest guy all day, but I turned it around for the night show. I feel good about my results. I tipped over in a corner, and it wasn’t ideal, but I’m overall. I’m just going to keep plugging away until next weekend and will take it day to day. I know what got me here, and I know that I haven’t deviated from it so I’ll just keep my faith in that.”

“I never really clicked with the track all day,” said Wilson. “The bike was running awesome and the team was good, it was just kind of all in my department. I was just off a little bit, but I know what I’ve got to work on and I’m going to stay positive and focus on next week.”

The team will now make its way to the Lucas Oil Stadium in Indianapolis, IN next weekend for the 11th round of the series.