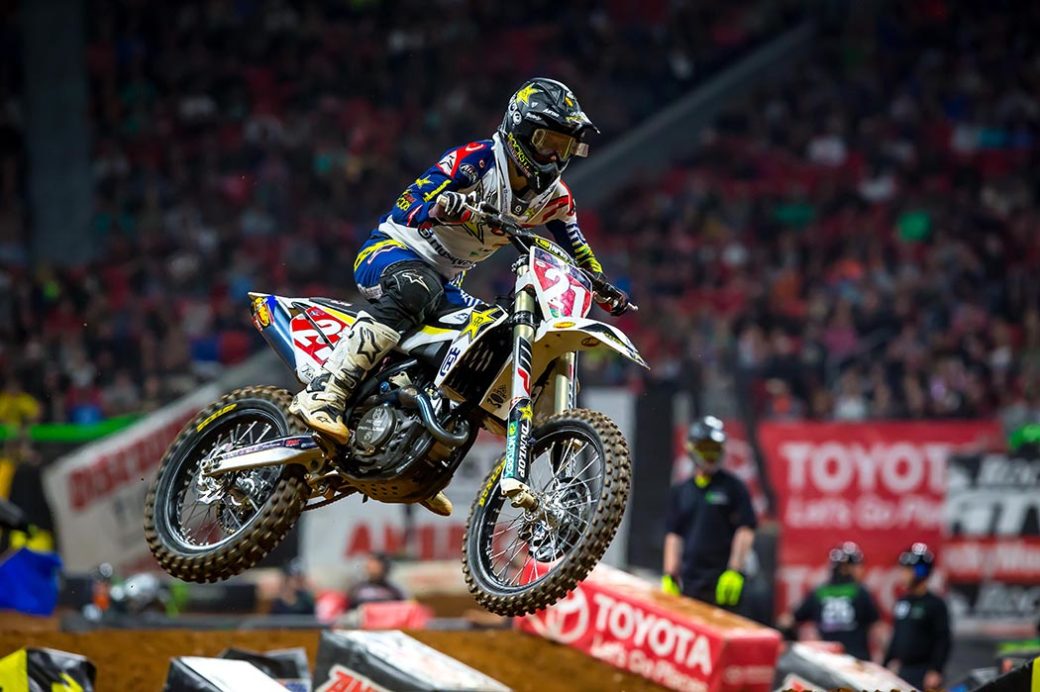 Riders faced the elusive Triple Crown format at the Atlanta Supercross, the ninth round of the series, held at the Mercedes-Benz Stadium in Atlanta, Georgia on Saturday.

Anderson pulled a fourth at the start of the first 450 Main Event and was on the tail of Blake Baggett in third. He made a quick inside pass in the third lap to overtake the third-place spot then started battling.

He made the pass stick the following lap and sat solidly in third. He inched closer to the top-two with three and a half minutes to go and got aggressive as he made the pass for second.

He swapped positions with the leader in a spectacular battle amongst the top-six riders, then held his ground to finish second. He pulled his first holeshot of 2018 in the second 450 Main Event, rode his own race out front, and held his ground to the very end to take the win.

He was fourth at the start of the third and final 450 Main Event and inherited third after Blake Baggett went down in the rhythm section in the second lap. He stayed focused and made the pass for second a few laps later, then went back to third after battling with Eli Tomac with just over seven minutes remaining in the race.

Still holding the points lead on the night, he rode a smart race to finish fourth. The 2-1-4 finish gave him his first Triple Crown victory of the season and maintains his lead in the 450 championship.

“I was really able to pull through for the races,” said Anderson. “Practice didn’t go as well as I had hoped, but I pulled through. I was consistent during the races—that’s what helped the most. The whoops were sketchy, but I had enough of a cushion in the last main to not have to push it so hard and still come out with the overall.”