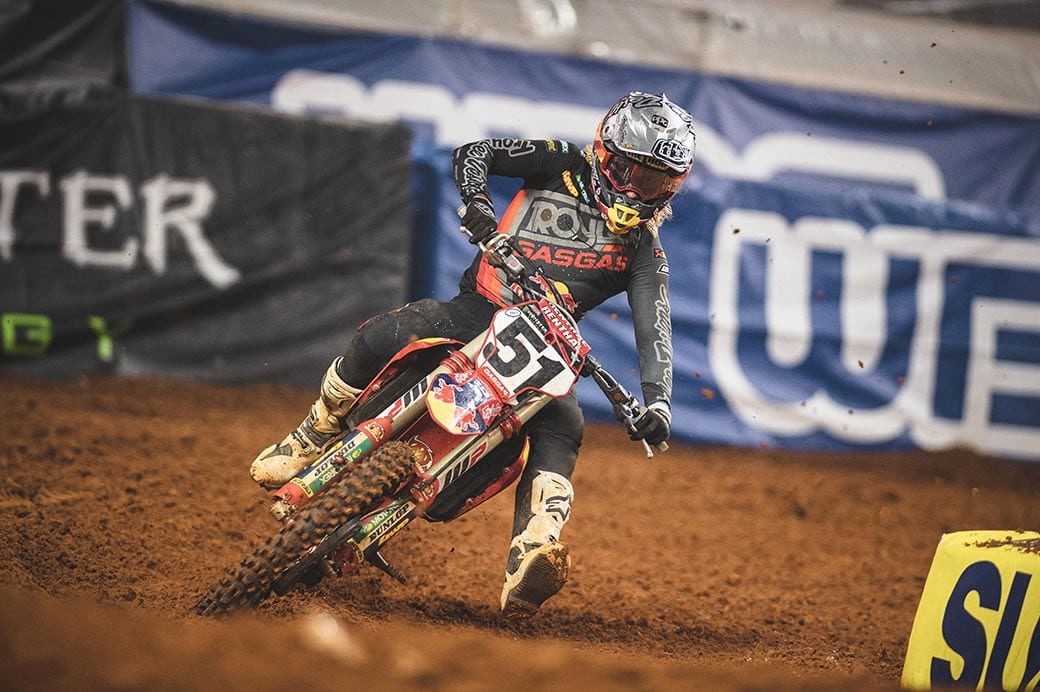 Justin Barcia has taken exception to RacerX’s social media coverage of the Arlington 2 450SX Main Event where he clawed his way to finish fourth after being down in 16th place.

Now and then there is friendly banter that goes backwards and forwards between riders and media — it can be fun to see it play out on social media. But Tuesday’s back and forth didn’t appear to be the usual good-humoured fun.

Every AMA Supercross race day, the RacerX team bang out tweet after dizzying tweet. It’s not for everyone — it can quickly flood your Twitter timeline, but it’s always excellent coverage. And I enjoy it.

As someone that has done something similar during Arenacross here in the UK, I can tell you it’s not easy keeping up with what’s going on on-track and rattling out mistake-free tweets. At times you only have seconds to think about what you’re going to send out to the world.

Like with everything else, it gets easier and you get better the more often you do it — hopefully.

But that doesn’t mean you don’t make the odd innocent clanger or what you’ve written can be taken the wrong way. Case in point, RacerX tweeted out during the Main Event on Tuesday night: “Bam Bam checked up on that pass at the last second but, man, that was an aggressive pass with an aggressive angle.”

Barcia later responded to the tweet: “Zero contact with anyone on the track tonight clean aggressive racing moving forward end of story! Whoever is running this page needs glasses get it together racer x.”

Adding: “I ride my a** off 100 per cent heart from 16th to fourth with zero contact and you guys seem to always talk BS about me #fakenews.”

Barcia appeared fired up about the night’s racing and felt his on-track actions had been misrepresented.

RacerX’s Jason Weigandt, via his account, jumped to the defence of the moto media giant. “I don’t think that was supposed to be meant as negative. Never said you made contact,” wrote Weigandt.

Barcia chimed back: “Ahhh it’s you I get it…… have a good night *waving emoji*”

Barcia ended his tweet with three applause emojis. To which Weigandt wrote: “I literally don’t know what that emoji means!”

To be honest, that one left me scratching my head and Barcia never explained himself. Which is probably for the best.

As we approach the sharp end of the season and with races coming thick and fast (Saturday, Tuesday and Saturday is tough), riders, teams, industry personnel and media alike all get stretched, it can open up tensions that would normally fly under the radar.

In a press release, the Troy Lee Designs/Red Bull/GASGAS Factory Racing Team rider admitted to being frustrated on just missing out on a podium after an impressive fight back through the pack.

“My riding was awesome in the Main Event,” said Barcia. “I just pushed through and got as far as I could but unfortunately missed out on the podium, which is frustrating, but all-in-all it was a good ride and I’m looking forward to getting back up on the podium on Saturday.

“The bike is really good, the team is good and I’m good, so we just need to nail those starts and we’ll be up there.”