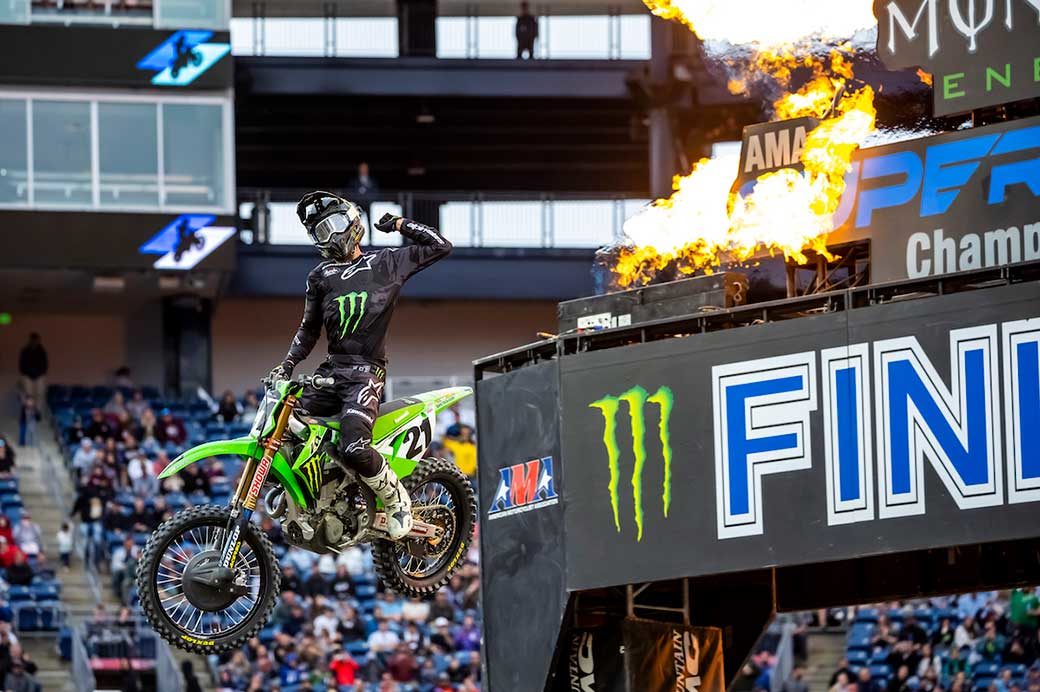 Round 15 of the Monster Energy AMA Supercross Championship headed north along the Atlantic Coast to Gillette Stadium in Foxborough, Massachusetts, where Monster Energy Kawasaki rider Jason Anderson captured his second consecutive and fifth race win of the 2022 Supercross season.

In the 250SX Class, Monster Energy/Pro Circuit/Kawasaki rider Austin Forkner put on an impressive charge through the field to snatch his first 250SX Main Event win this year.

When the team arrived for track walk early Saturday morning, they found the dirt to be dry and rocky despite being watered the night before. As the morning practice session began the track conditions continued to deteriorate, making the jumps edgy and the whoop section cupped out. When Anderson first took to the track in timed qualifying, he quickly found the fast lines and finished the first qualifying session on top of the leaderboard with the fastest lap time (50.762). With clear understanding this was a must-win race, the #21 found additional pace onboard his KX™450SR in the second session and would better his time to 50.316, qualifying him second overall and earning him first gate pick for the first 450SX Heat Race of the day.

As the gate dropped for the 450SX Heat Race, Anderson emerged from the first turn in fourth position and quickly took over third before the end of the opening lap. With the front two riders within striking distance, the New Mexico native began applying pressure early in the race. Anderson jockeyed for second place momentarily before using his speed advantage in the whoops to take control of the position and chase down the leader in the later stages of the Heat Race. As the short six-minute plus one lap race began to wind down, there was a brief exchange for the lead before a small mistake by Anderson dropped him back to third. However, the #21 was quick to recover from the mishap and was back in full control of second place when the chequered flag flew.

At the start of the 450SX Main Event, Anderson again launched out to another excellent start, this time emerging from the first turn in third and right behind the championship points leader. With the front three all having championship-winning experience, the stage was set for an action-packed race. Looking to make a statement and put his Kawasaki on top of the box, Anderson was quick to make the pass for second by railing the inside corner after the finish and immediately pulling away from his main championship points rival. On Lap 5, Anderson again made a skilful run through the whoop section to enter the following corner with the inside lane advantage placing himself into the lead. As racing progressed, Anderson faced pressure from the competition behind him but showed veteran-like maturity as he defended the lead while picking through lapped riders and proceeded to build a comfortable gap. With just over a three-second lead, Anderson cruised to the finish line to cross the chequered flag first bringing all of Gillette Stadium to their feet and securing his fifth 450SX win of the season.

Jason Anderson: “The track was really dry and rocky during the early parts of the day and made for some gnarly conditions in my Heat Race. Thankfully by the time the Main Event was underway, the track was starting to come around and I was able to string together a couple of solid laps to take control of the lead. With the Supercross Championship quickly coming to a close, I knew this win wasn’t going to be easy so I kept charging and defending the best I could. I’m really pumped to get another win this season, but I definitely couldn’t have done it without all the effort put in from my entire team.”

Anderson’s clutch performance inside Gillette Stadium further closes the 450SX championship points gap to 43 and keeps his title hopes alive with only two races left in the series. 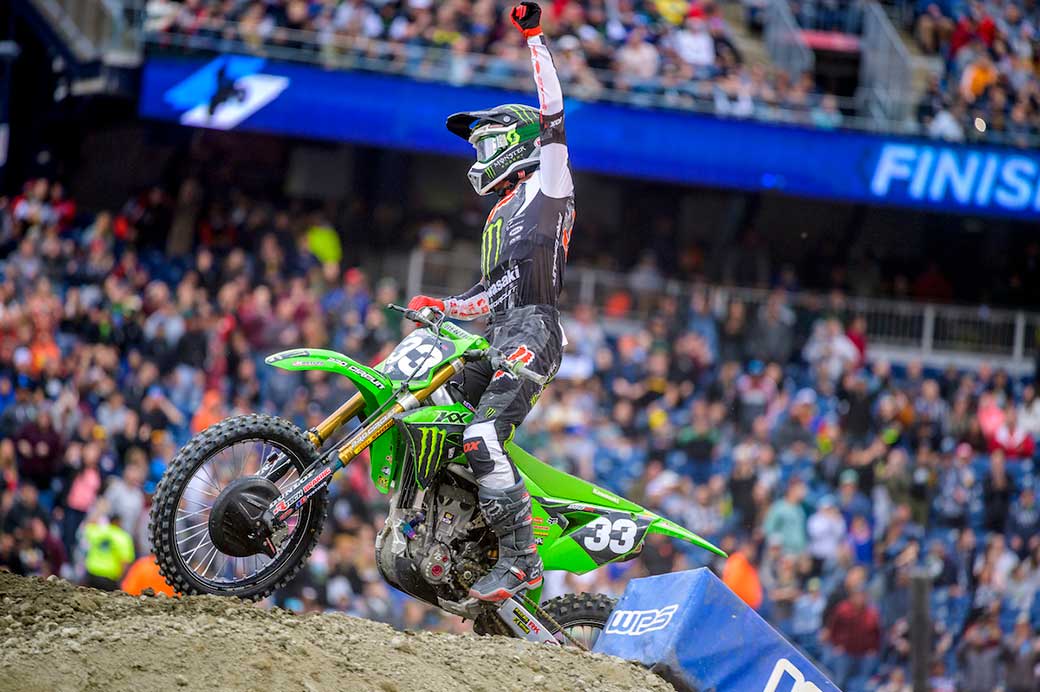 Eager to battle for podiums and race wins again, Forkner entered the penultimate round of the 250SX Eastern Regional Championship with a little extra motivation. When the first 250SX qualifying session began, Forkner made a strong statement by clocking in a 52.440 lap time, over two tenths quicker than the closest competitor. In the final 250SX qualifying practice of the day, Forkner proved his original time was no fluke and impressively dropped his lap time by almost two seconds to a 50.649 and secured the top overall qualifying position.

When the second 250SX Heat Race began, Forkner found himself caught up in a first turn pileup that dropped him outside the top-10. The #33 KX250 rider made quick moves through the field, passing at least one rider each lap. By the end of the six minutes, Forkner was up in third and quickly closing ground on the front two riders. In a last-lap effort to move into second, Forkner attempted a pass in the corner following the whoop section, but he closed in so fast on the rider ahead that the second place rider cut to the inside and they both went down. Determined to avoid the Last Chance Qualifier (LCQ), Forkner quickly remounted his Kawasaki KX250 race machine and crossed the line in fifth place.

As the 250SX Main Event began, Forkner found himself challenged with a start outside the top-10 but quickly made his way into seventh by the end of the opening lap. With the championship points leader hot on his tail, Forkner carved through the riders ahead with surgeon-like precision. Similar to his Heat Race performance, the #33 raced forward with determination, nearly passing one rider each lap. On Lap 6, while still fending off pressure from the series’ points leader, Forkner moved into a podium position. As racing continued, Forkner capitalized on the mistakes of the riders ahead to advance into second. Having to simultaneously defend from his main rival while also charging through the pack, the Missouri-native was putting on an impressive race and moved into the lead as they entered the final stages of the Main Event. With just two laps left, Forkner again was forced to defend another attack from behind but used his veteran experience to remain in the lead and secure his first 250SX Main Event win of the 2022 Supercross season.

Austin Forkner: “I had a little extra fire in me coming into Foxborough, especially after last weekend’s race. I felt my results didn’t show my true speed, so I came into this race super focused and ready to show everyone what I’m truly capable of. The day started off perfect with me sitting as the fastest qualifier. That was a big win for me mentally and got me fired up for the rest of the day. I definitely made things harder on myself with my Heat Race crashes, but I’m so proud for overcoming the day’s challenges and getting my first 250SX Main Event win of the season. Overall, it was an exciting night of racing for us and I’m ready to fight for another win when we head to Salt Lake City.”

Forkner’s win in Gillette Stadium secured his second podium finish of the season and proved the 23-year-old is a serious threat to battle for wins in the 250SX Class.