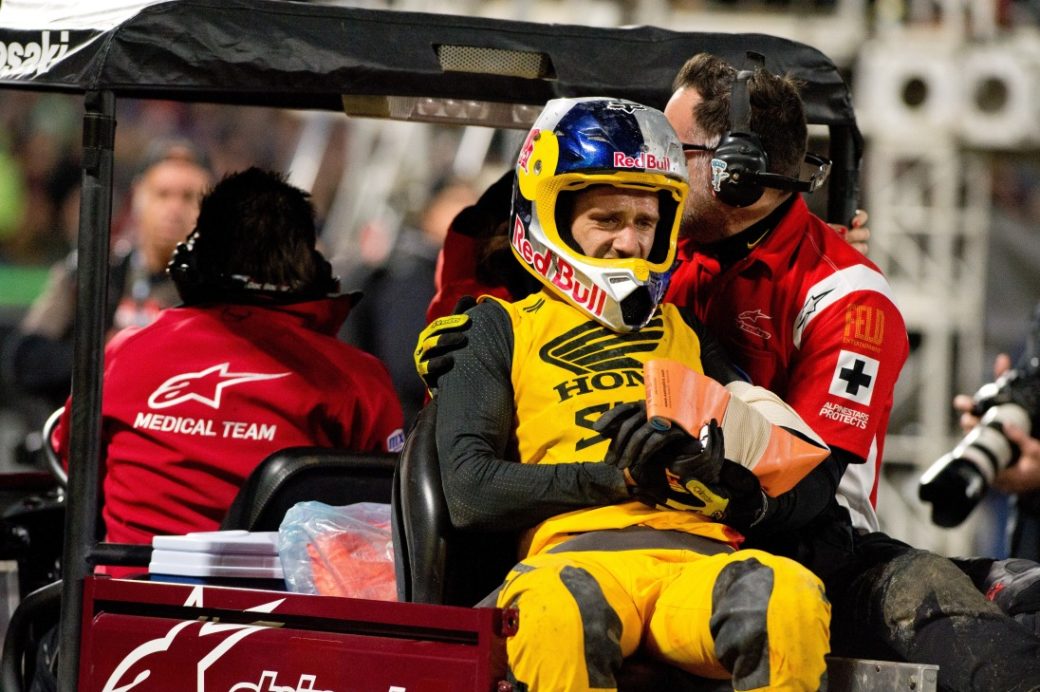 Heavy rain leading up to the event had left numerous soft spots in the transitions between the jumps and Roczen hit one of these before being catapulted over the bars into the face of a jump.

Initially his team said he’d sustained a compound fracture – when the bone punctures the skin – to his left radius. However, on Monday the German used his Twitter account to update fans and revealed he’d also dislocated his wrist and elbow.

‘The first 30h absolutely sucked as none of the pain killers worked and it was really swollen,’ he Tweeted. ‘Gonna need few surgeries to get all this dialled.’

At the Anaheim 2 post-race press conference Dungey was visibly upset when, referencing Roczen’s crash, a US journalist asked him how he dealt with the risks involved with racing.

The defending champion, who missed most of the 2016 outdoor season after fracturing a vertebra at Thunder Valley in Colorado early on in the Lucas Oil Pro Motocross Championship, chose his words carefully.

“Where I was at with outdoors,” he said, “you’re trying your best, you’re giving it your all, you make a mistake and sometimes it costs you. Then again you can’t ride scared out there either and you’ve got to enjoy it a little bit.

“The pace is only getting faster, the riders are only getting better – [SX track builder] Durt Wurx did a great job and it’s not their fault but the rain’s got to go somewhere in those trannies and it creates a little bit of a soft spot.

“I hate to see stuff like that happen. I hope he’s okay, I don’t wish that on nobody. We need him, we need a guy like that.”

“We were rolling the section and going by Kenny for a couple of laps,” he added, “and it’s hard to see him laying down and not moving and it gets you in your head and the rest of the lap you think about it.”