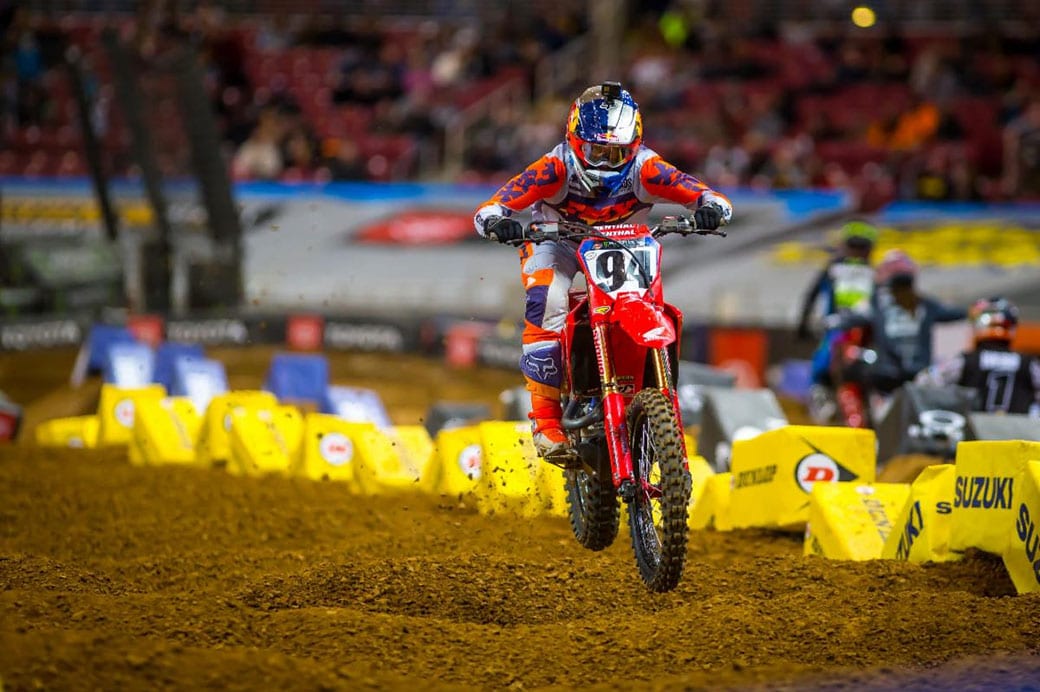 The second round of the 2020 Monster Energy AMA Supercross, an FIM World Championship series was an emotional one in front of 51,841 fans inside The Dome at America’s Center.

Team Honda HRC’s Ken Roczen earned his first 450SX Class win after what many had thought would be a career-ending injury in 2017. Three seasons worth of events, 50 rounds of which he’d competed in 26, had come and gone since the German rider was able to get back on top for his 12th career win in 75 starts.

Behind him, Monster Energy Yamaha Factory Racing’s Justin Barcia, the winner of round one, fought his way to second place to hold onto the championship points lead. The 2018 Monster Energy Supercross Champion, Rockstar Energy Husqvarna Factory Racing’s Jason Anderson, got onto the box for the first time since round two of 2019 after missing all but three rounds of that series.

In the Western Regional 250SX class Austin Forkner took his first victory since an injury ended his 2019 season while leading the championship.

After a disappointing sixth place and a bike set-up that was overly stiff at the season opener, Ken Roczen looked like a new rider at round two. A 450SX Heat Race 1 win gave Roczen the first gate pick in the 450SX Class Main Event. He was fourth off the start but quickly into second. He hounded Rockstar Energy Husqvarna Factory Racing’s Zach Osborne for less than two laps before putting on an aggressive pass and pulling a quick gap on the field.

Monster Energy Yamaha Factory Racing’s Justin Barcia was next to pass Osborne about one lap later and took chase but could not make up time on Roczen. When class rookie Adam Cianciarulo of the Monster Energy Kawasaki team passed Osborne in the same place, and in the same aggressive way that Roczen had, the Husqvarna rider fought back, retaking the position in the very next corner and forcing Cianciarulo into a mistake that dropped him back to sixth.

Riding a smart and steady race that started inside the top five, Rockstar Energy Husqvarna Factory Racing’s Jason Anderson first took advantage of Cianciarulo’s mistake, then moved past his team-mate Osborne at just past the five-minute mark of racing to get into third. 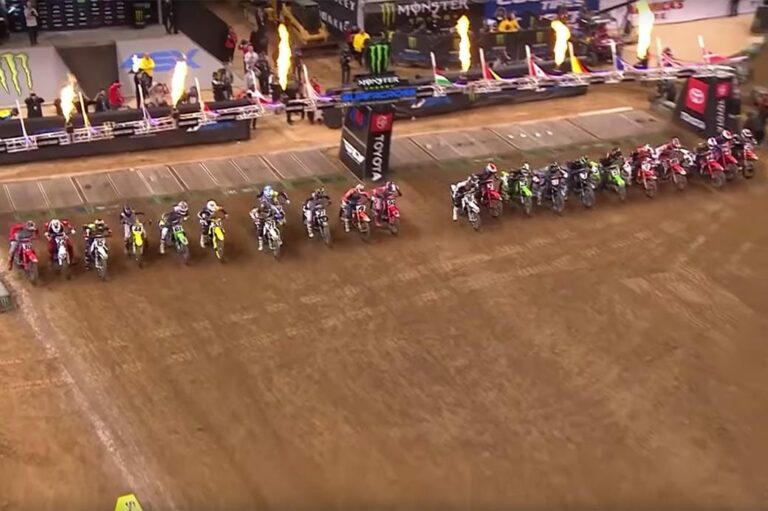 Monster Energy Kawasaki’s Eli Tomac, the winner of the last two visits to St. Louis, was recovering from a 19th place start. The Colorado rider threaded his Kawasaki through the field, moving up to seventh by mid-race. With great dirt that favours his aggressive style in St. Louis, Tomac pushed until the very end, when a last-lap mistake by his team-mate Cianciarulo and a pass on Osborne earned Tomac fourth place overall.

On the podium Ken Roczen and his team were elated. “This is unbelievable,” the German said. “I mean, I made a pass out there pretty quick in the beginning. I ran it in there pretty hard, but sorry to Zach, but I just had to go. I told my mechanic [Jordan Troxell], I said, ‘I want to win so frickin’ bad,’ and that’s what we did.

“The team really excelled this week. We were scrambling a little bit, but we came out with a plan and it seems like the plan turned out really well for tonight… It’s just that one [return win], I’ve messed it up plenty of times in the past, getting passed there towards the end [in previous races], but I put my head down the entire race.”

As for how this victory affects his season going forward, Roczen said: “We’ve been tweaking with the bike throughout the entire day, and I feel like we still could have been better, but the fact we rode the way we rode right now I think I’m just going to leave it and enjoy the racing. This has been a long time coming and I still can’t believe it finally happened. Never give up.”

Last weekend’s winner, Justin Barcia, was sick but still managed a second-place finish. “I can’t believe being up here tonight. I’ve been so sick all week. I feel so bad right now, but I just never gave up, rode with a lot of heart… It was brutal tonight. I’m pretty proud of myself for how I rode and how I managed my whole day, but it was really difficult. This is the [type of] day when you win championships, I think. So, all in all a great day, track was awesome, and my bike worked really well tonight so no complaints.”

Jason Anderson’s last podium was round two of 2019. “I’m just out here enjoying myself,” said Anderson. “It’s the beginning of the season so you can’t be too crazy. I’m just out here, I feel like I was riding pretty good. I feel like I’ve been right up there, you know, like five through three. And you know taking a whole season off really gets you. So, I’m going to try and get back up to speed and I feel like I’m going to try to put myself in good positions, and I’m excited.” 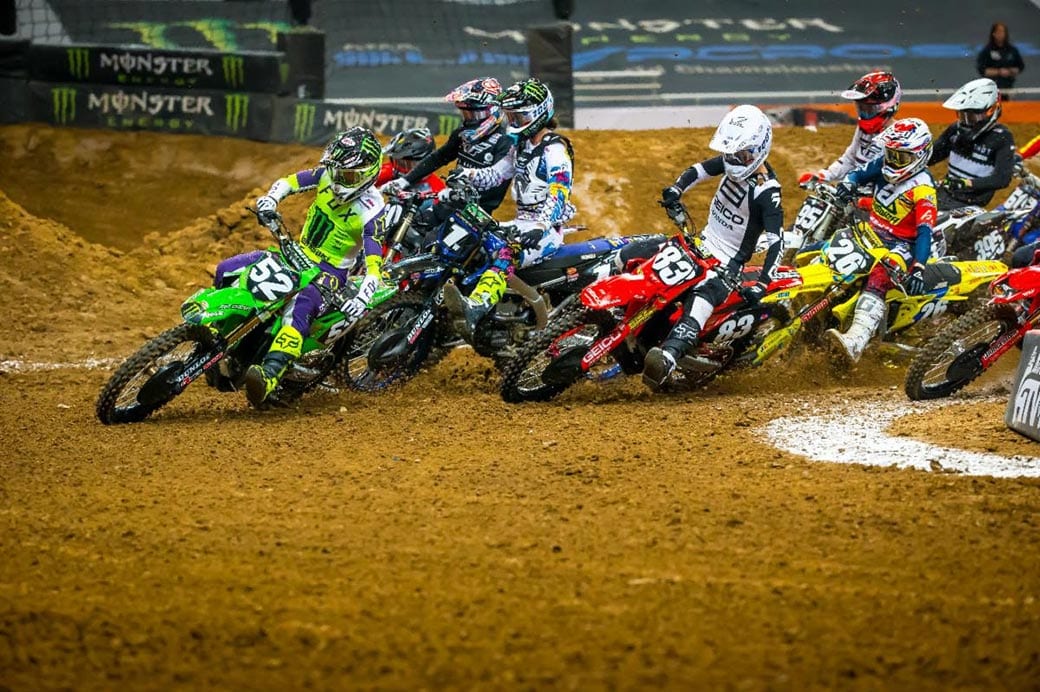 When the gate dropped for the Western Regional 250SX Class Main Event, GEICO Honda’s rookie Jett Lawrence timed the gate and put down the power perfectly to grab the holeshot from an outside gate position.

Ferrandis went into the mechanic’s area for a clutch perch adjustment before getting back into the race.

Out front, Forkner was riding with enough speed to keep the 16-year-old rookie Lawrence just outside of striking distance. Two and a half minutes into the racing Monster Energy/Star Yamaha Racing’s Justin Cooper reached fifth, then two minutes later got around Troy Lee Designs/Red Bull KTM’s Brandon Hartranft.

Cooper was on the move, quickly passing GEICO Honda’s Christian Craig after about six minutes of racing and setting his sights on Lawrence. With less than four minutes and one lap of racing left, Lawrence clipped some Tuff Blox – the mistake allowed Cooper to catch and pass into second, where the Yamaha rider would finish, to retain the series points lead.

Lawrence elected to take a quick detour into the mechanics area after the tangle with the Tuff Blox, allowing Hartranft to earn his first Monster Energy Supercross podium with a third place.

On the podium, Forkner reported a slight issue he was having during the race. “…I could hear these fans, it was awesome,” he said. “I started thinking about [being in first] a little bit when I heard you guys cheering and I realised, ‘I’m in first and I’ve got a shot at winning this thing,’ so I got a little tight but managed to just kinda settle in, got back out just a little bit there at the end and got the win. I’m really happy.” 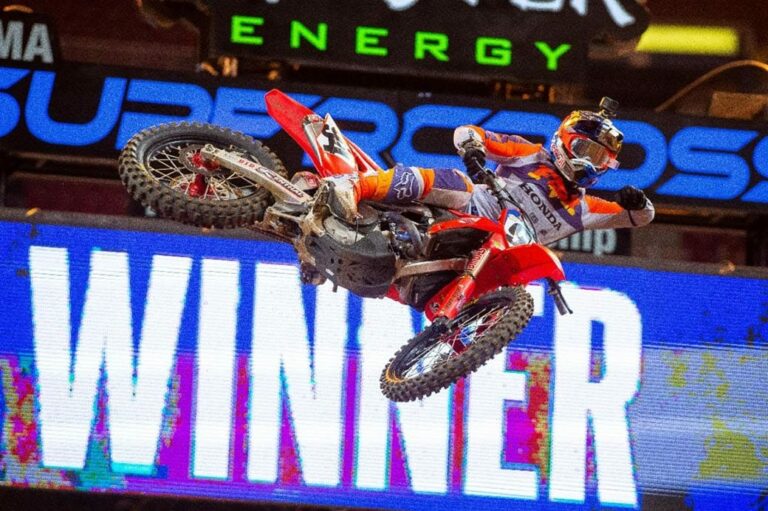 After tasting his first win the week prior, Cooper was asked about the high number of riders he had to pass this weekend in both his Heat and the Main. “Last weekend I had it pretty easy, I was out front just clicking off my laps,” he said.

“Definitely a lot to learn this weekend, definitely a lot of passing. But it’s good for me. It’s good to put myself in those positions. You obviously don’t want to be there, but you learn a lot from it. …I was able to watch the leader and just keep my eye on where they were going and just not letting them get too far ahead. But they didn’t push hard enough in the middle part of the race. I felt like I didn’t leave it all out there, but it was a smart ride all in all.”

In his 19th start, Brandon Hartranft was ecstatic. “…I can’t believe it, to be honest with you right now,” he said. “With only two laps to go… Christian and Jett, [looked like they] crashed, I knew I was in fifth when they both went down. I’m like, ‘I don’t know if I’m in third or not.’ But then with two laps to go I looked at the board and I’m like, ‘Okay I’ve got to get this done.’ So, I’m so happy.”

The series returns for its second visit to Angel Stadium in Anaheim, California next weekend for round three of the 17-round 2020 Monster Energy Supercross series.