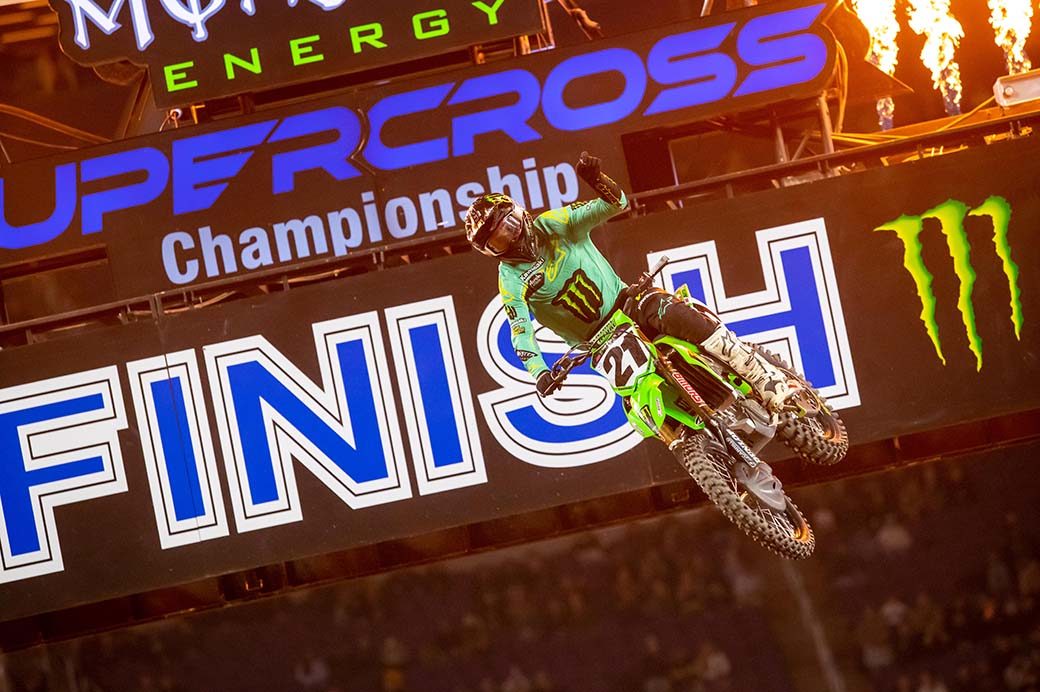 Monster Energy Kawasaki’s Jason Anderson grabbed his third win of the season at Round 7 of the Monster Energy AMA Supercross Championship inside U.S. Bank Stadium in Minneapolis, Minn.

The top finish inside the domed stadium closed him to within three points of the championship points lead. Red Bull KTM’s Cooper Webb crossed the finish line in second, earning his second podium of the season with his Red Bull KTM teammate Marvin Musquin taking third place and Musquin’s first 2022 podium.

In the opening round of the Eastern Regional 250SX Class series, Team Honda HRC’s Jett Lawrence took the win and the early points lead to what looks to be a very competitive division.

When the gate dropped for the 450SX Class Main Event defending champion Cooper Webb pulled the Holeshot and jumped out into the early lead. Within three corners Team Honda HRC’s Chase Sexton moved into second and right onto Webb’s rear fender. With Anderson right on Sexton’s tail, the three quickly pulled a slight gap on the rest of the field.

In the opening minute of racing Monster Energy Star Racing Yamaha’s Eli Tomac, the current points leader, tangled with his teammate Dylan Ferrandis and set his bike down on the face of a triple jump. The minor crash dropped Tomac to last place.

With just over five minutes off the race clock in the 20-minute plus one lap Main Event, Sexton muscled his way around Webb and sealed the pass with a strong drive through the whoops. But the top-three rider breakaway didn’t extend its gap on the field. Instead, Rockstar Energy Husqvarna Factory Racing’s Malcolm Stewart charged up from fourth place and re-established contact as Anderson pressured Webb for second. 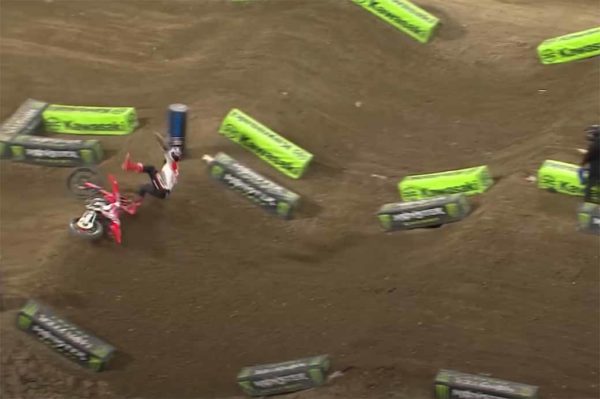 When Anderson and Stewart got past Webb in quick succession, Webb’s teammate Musquin had the defending champ in his sights. In another flip of the traditional script, Webb mounted a charge on Stewart, who slid out in a flat corner with just under three minutes left on the race clock.

Just when the finishing order looked settled, Sexton’s front wheel tucked and torqued the bike to a quick stop on a jump face. The bike flung Sexton into the air. The crash warped the bike’s front wheel and the impact took Sexton out of the race in spite of trying to remount the machine.

The Monster Energy Supercross flames signalled Anderson’s third win of the season. Webb took second place and Musquin tallied his first 2022 podium. Tomac’s speed allowed him to recover to a sixth-place finish to hold onto the championship points lead. 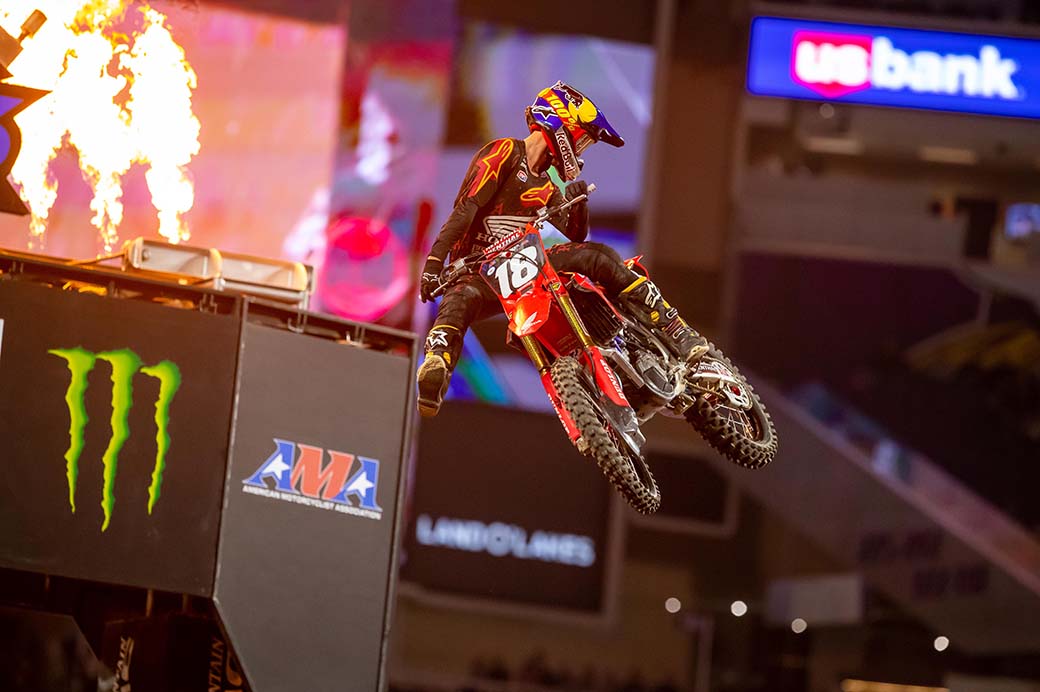 There were opening-round jitters and anticipation as the Eastern Regional 250SX Class kicked off in Minneapolis.

Monster Energy Pro Circuit Kawasaki’s Austin Forkner jumped into the lead at the Holeshot stripe with Jett Lawrence quickly into the second spot ahead of Forkner’s teammate Cameron McAdoo. 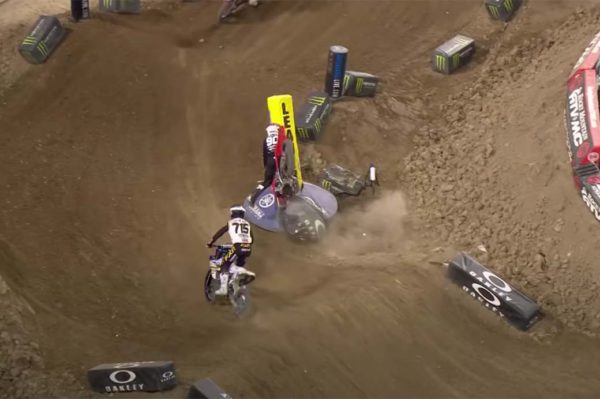 Lawrence put an aggressive inside-line pass on Forkner less than a minute after the gate drop then rode a smooth and effortless-looking race to the first checkered flag of Eastern Regional 250SX Class competition.

Rockstar Energy Husqvarna Factory Racing’s RJ Hampshire rounded out the top five after closing on Martin but running out of time for a pass attempt.

Next Saturday the Supercross series makes its first 2022 visit to Texas with the second of three Triple Crown Events set for February 26th inside AT&T Stadium in Arlington. The unique Triple Crown schedule foregoes qualifying for three races that combine to determine the event winners and pay single-event championship points. 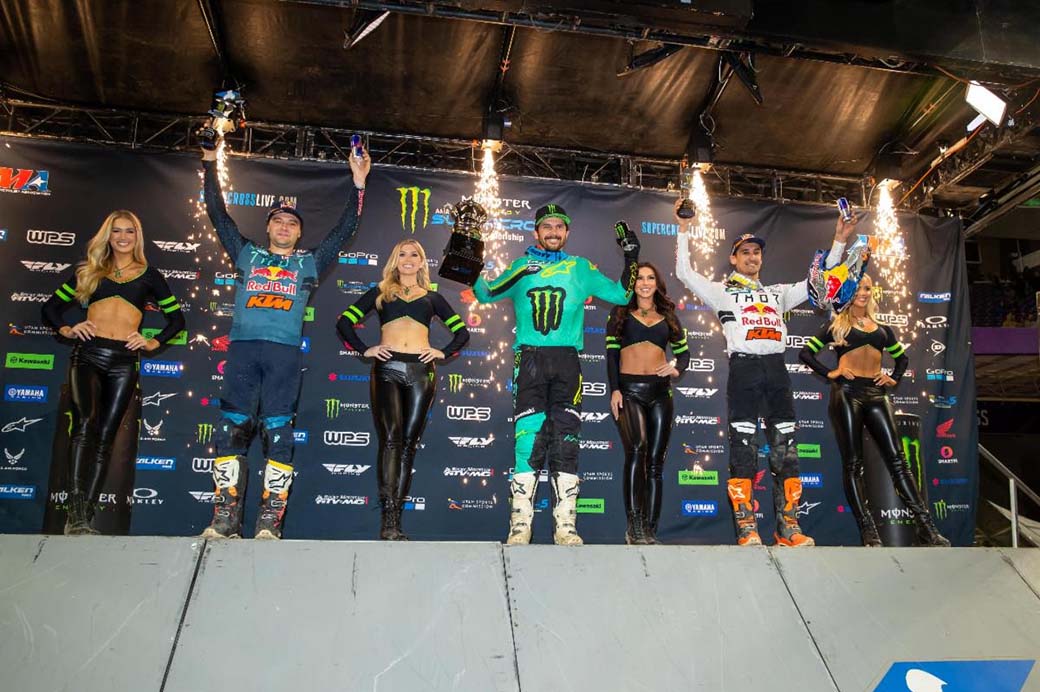 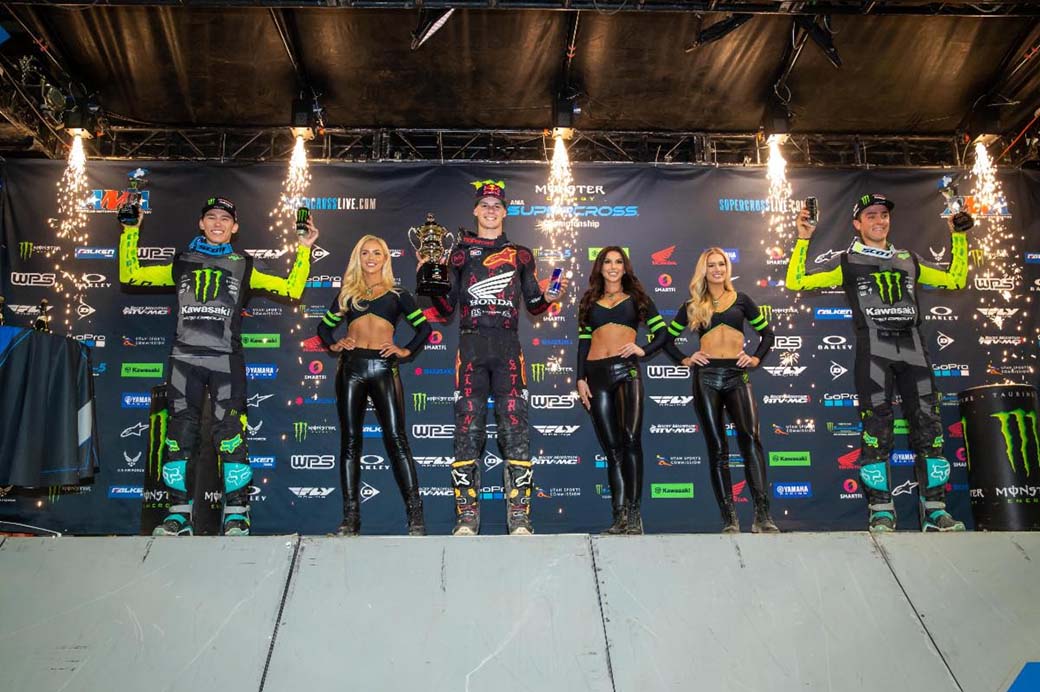