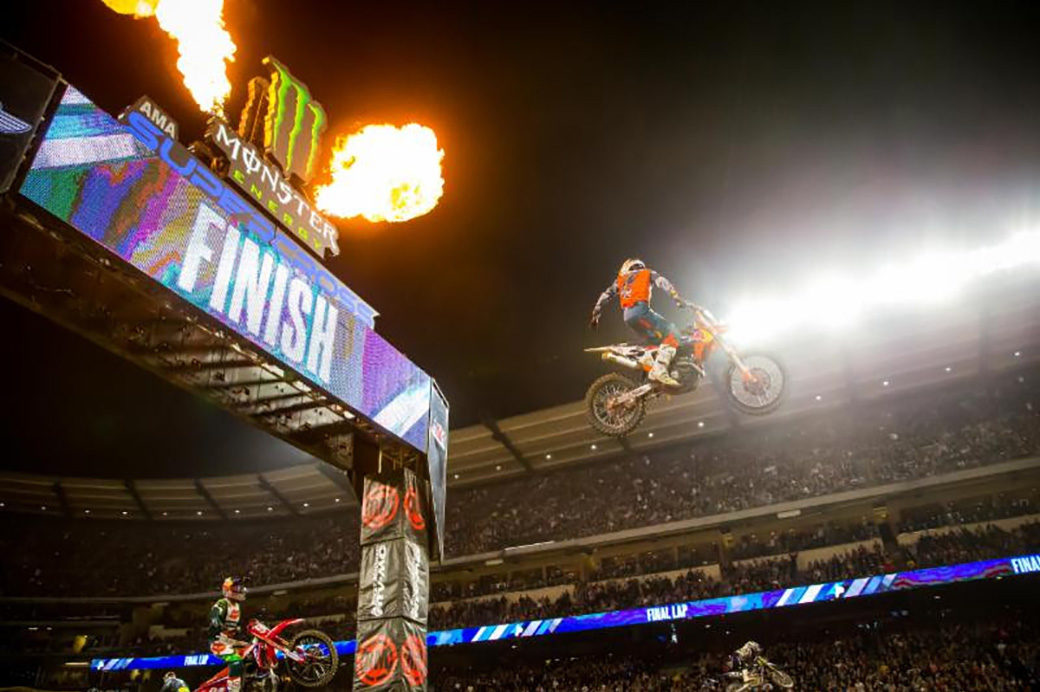 Round three of the Monster Energy AMA Supercross series, an FIM World Championship, featured the first of three Triple Crown events, where instead of running qualifiers and then a single Main Event, each class runs three Main Events and the lowest overall score determines the winner.

In the second Main Event, Webb took the holeshot and led every lap to score his second win on the night, holding off team-mate Musquin at the finish, with Barcia third, Tomac fourth, and Roczen fifth. Going into the final Main Event, Webb led his team-mate Musquin by three points, which meant he only needed to finish fourth place or better to win the overall. Tomac ended up leading every lap of the final Main Event while Webb rode relatively conservatively to score third, just behind Musquin and in front of Roczen.

“Last weekend, I was 10th, and I was pissed off, man,” Webb said after winning his first-ever 450SX Class Main Event. “That wasn’t what I wanted. So, I had some redemption this week, but to win is insane. To win two races and be on the podium in that one. I was so nervous that last one, just trying to hold on. But it’s incredible.” 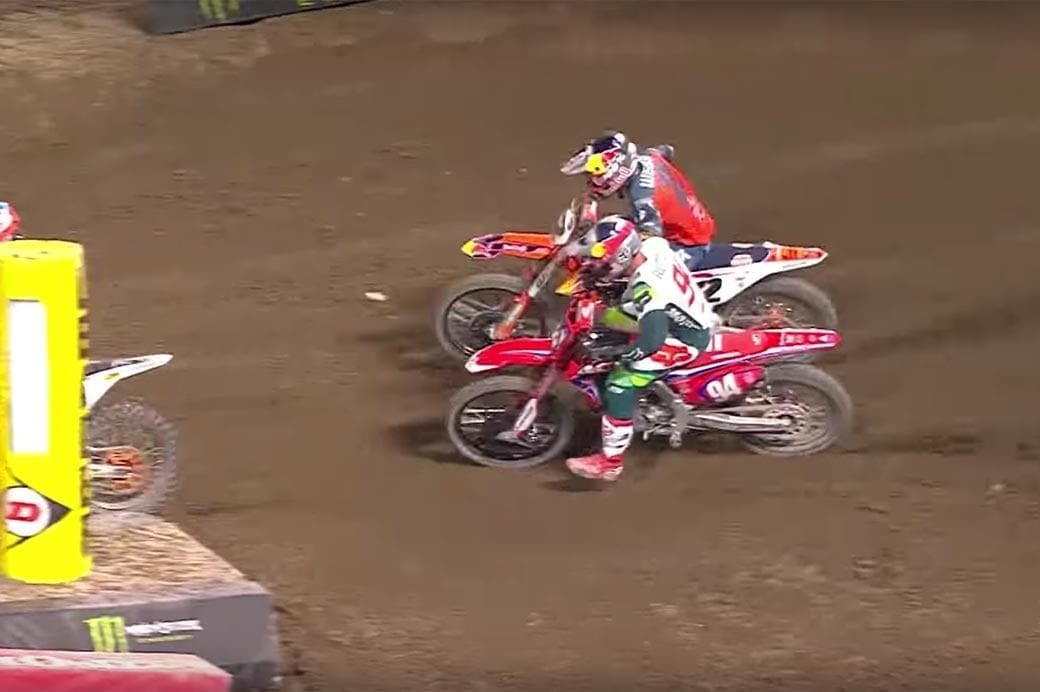 Webb’s team-mate Musquin went 3-2-2 on the night to score second overall, giving the Red Bull KTM team a 1-2 sweep of the class, despite a knee injury Musquin’s been fighting since the off-season.

“I just go race by race,” Musquin said. “This week, I stayed in California. The weather was pretty bad, but I took the whole week off the bike and tried to not hurt the knee too much on the bike.”

“[Race] one and two, I was just kind of riding around, is what I felt like,” Tomac said. “I wasn’t attacking. I wasn’t getting my flow. And then the third one there just obviously got the holeshot, was in clean air really…”

Monster Energy/Yamaha Factory Racing’s Justin Barcia, who won Anaheim 1 two weeks ago, had a heavy crash in the final 450SX Class Main Event of the night and had to be carted off to the Alpinestars Medical Center.

In the second Main Event, Nichols led early but fell over when his team-mate Ferrandis pressured him for the lead. Nichols remounted behind Ferrandis and McElrath, who ended up going 1-2 in the main, while Nichols ended up third in front of Hampshire and Hampshire’s team-mate Cameron McAdoo.

Then, in the final 250SX Class Main Event of the night, Cianciarulo held the early lead before McElrath worked his way around him to take the lead, then sprinted off with the victory over Cianciarulo and Ferrandis. Nichols ran as high as second but ended up fourth in the third Main Event just in front of Hampshire.

After two consecutive third-place finishes in the opening two rounds of the 2019 championship, McElrath’s 3-2-1 score landed him his first 250SX Class victory of the season. 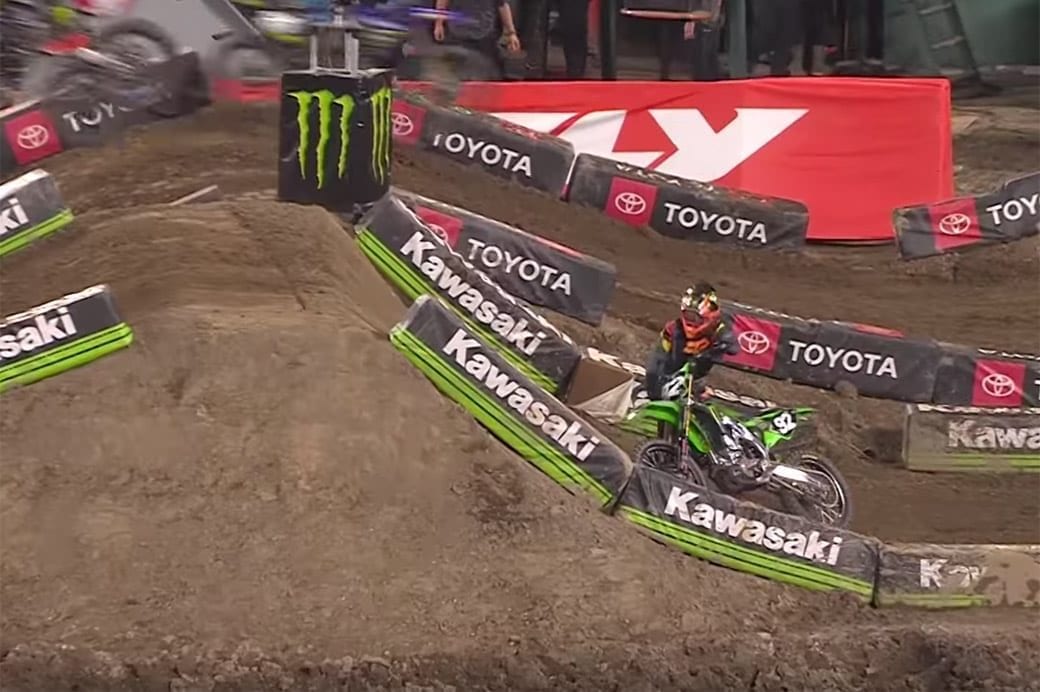 A 2-1-3 score for Ferrandis tied him on points with McElrath, but the tiebreaker goes to the highest finisher in the final race of the night, so Ferrandis was forced to settle for second.

“I rode bad,” Ferrandis said. “I didn’t deserve to win tonight. Shane [McElrath] rode really good and he won, so congrats to him. I’m really frustrated by myself. It’s not the place I want to be. We’ll see next weekend. We’ll try to rebound. I’m really unhappy about myself and really disappointed, so we’ll see.”

Nichols ended the night third overall with a 1-3-4 score, but he still holds the points lead as the series heads to round four at the Oakland-Alameda County Coliseum this coming Saturday night.

“I mean that’s always great, to hold onto the red plate,” Nichols said. “That’s kind of the goal. I kind of came out on fire that first one then was leading the second one and had a dumb little tip-over. Just my own mistake. Just a little brain fart if you will and just kind of tipped over. The third one I got the holeshot, started right where I needed to and just was a little flat.”