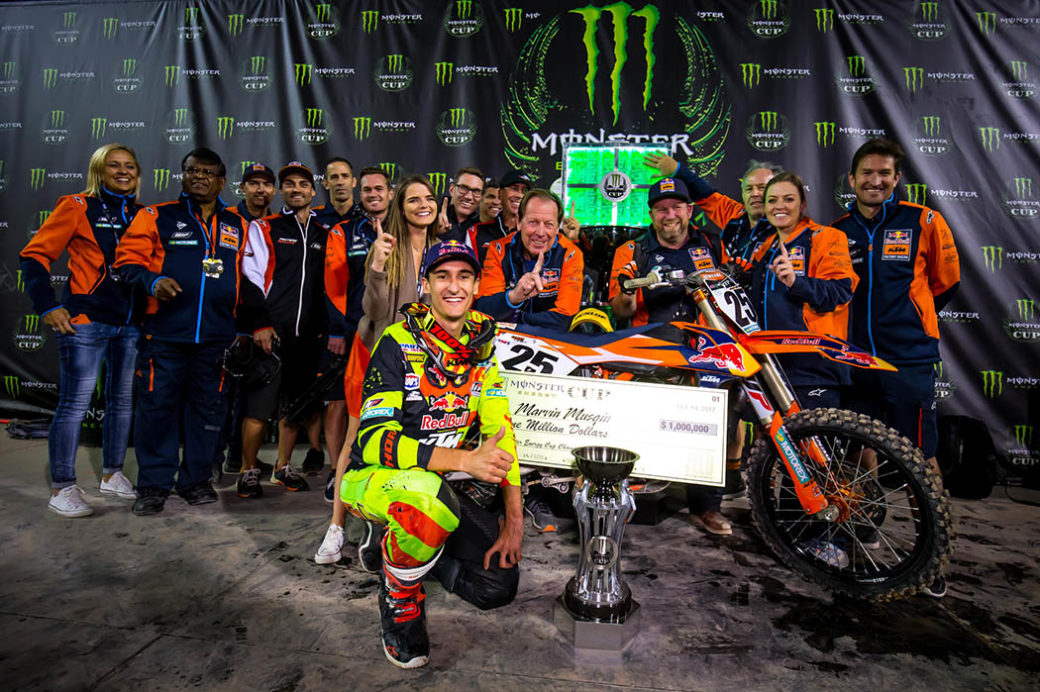 The unique event boasts a hybrid Supercross/Motocross track layout and a high intensity race format of three, 10 lap races to make for one of the most exciting and anticipated events of the year. This race is also perfect testing grounds for the Red Bull KTM Factory Racing Team to test and tune their KTM 450 SX-F Factory Edition race machine for the upcoming 2018 Supercross season.

Marvin Musquin rolled into Vegas focused and ready to strike, riding flawlessly from his first lap on the course and raced to perfect 1-1-1 scores on the night. He took the overall Monster Energy Cup win and, with it, the million dollar grand prize. Broc Tickle, making his debut with the Red Bull KTM Factory Racing Team, rode impressively all night after only a few weeks on his new ride to claim fourth overall on the night.

The night kicked off with race one for the Cup class and would be the first time the riders would face the unique drop down, split start. Musquin got off to a third place start and quickly went to the lead on lap one, before the ‘Joker Lane’ came into play and moved him back to sixth. Marvin strategically took the Joker Lane a lap later to move into second and then made an impressive pass for the lead on lap three and raced off to take the win. Tickle was eighth at the start, but quickly found his flow and began to pick riders off. Lap after lap Tickle clawed his way to the front logging some impressive laps and was able to get to fourth by the time the checkered flag flew.

In race two both Marvin Musquin and Broc Tickle executed perfect starts on their KTM 450 SX-F Factory Editions to come around 1-2 at the start. Marvin put his head down and the power to the ground and began to inch away from the pack, leading every lap and to take a convincing race two win and just one win away from the million. Tickle was regulated back to the third position on the opening lap and rode strong all moto to grab third at the finish and his first podium on his new ride.

Race three was the last race of the night, and a chance for Musquin to cash in on the million if he could once again claim another race win. With the entire packed stadium of fans on their feet and pressure at an all-time high, Marvin came out of the gate perfect to pull a huge holeshot and lead lap 1. Marvin rode flawlessly on the technical, slippery course and, lap by lap, inched away from the competition. With a comfortable gap built, Musquin rode a smart final lap and crossed the checkers to take a huge final race win to tally his perfect 1-1-1 score and grab the Monster Cup Million-dollar prize. Tickle came out up front once again and was fourth on lap one and chased the top three riders all moto long with hopes of making a pass to grab an overall podium finish on the night. The 10-lap race went quick for Broc and, at race end, claimed a fourth-place finish and with it, fourth overall on the night.

Musquin: “I wasn’t even thinking about winning all three motos. It’s unreal to go out and win all three. We had such a long break between the second and third moto – which made it more stressful. The key was to get a good holeshot and try to go fast. To be honest, in my head I was thinking I would get a start around the top-three and then wasn’t sure what I would do. I knew it was going to be so hard to pass, so getting the holeshot was the best way to go out for the third moto. I think this is great for the sport – a lot of people are watching on tv. To see that someone is winning one million dollars in one night at a motocross race is unique. I think we got a lot of views, and people will be talking about it, that’s for sure. We were all in disbelief when I crossed the finish line. It’s super cool- this doesn’t happen often. I had so much fun.”