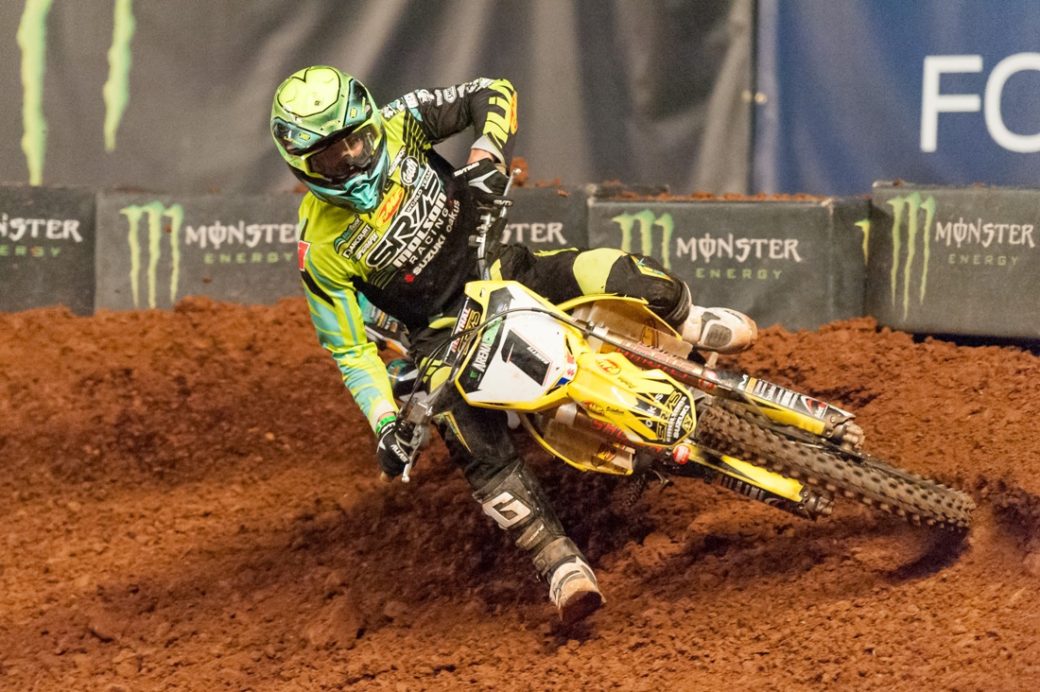 The Frenchman, who’s signed a global deal to race for the British-based team, scored AMA SX points last year in Las Vegas and is aiming to improve on this 15th place when the 2016 series makes its annual stop at the iconic Daytona International Speedway.
“To once again have the opportunity to represent the team in the USA is a dream for me,” he said. “Last year was amazing, and racing at this level in AMA Supercross taught me a lot. This is the toughest platform and I really enjoy racing on the big tracks.”
Ramette will head to America after the final round of the Monster Energy Arenacross Tour at the SSE Arena in Wembley, London, this Saturday night. The defending champion, he currently sits second in the Pro championship just three points behind series leader Cedric Soubeyras.
“It would be great to race a few races back to back but we will go to Daytona straight from our London AX finale and directly into the strongest series and I will see how it goes,” he added.
Tough
“Daytona is an iconic and very tough race and I am incredibly excited to get on the track.
“It is fantastic to have the support of my SR75 team and Suzuki USA for this journey and I thank everyone involved in making this dream a reality.”
Team owner Geoff Walker’s out-of-the-box thinking regularly sees his riders contest high-profile events.
As well as his AMA SX appearances Ramette also raced last October’s Red Bull Straight Rhythm and in 2014 team-mate Cyrille Coulon competed in the Las Vegas Supercross and the opening round of the AMA Lucas Oil Pro Motocross Championship at Glen Helen.
“From a personal point of view I am pushing to keep the progression and development moving forward with the team and all that it involves,” said Walker.
“Thomas has shown his class, skill and mental strength over and over when he has been challenged in his time as an SR75 rider and Daytona will be another massive challenge.
“Racing AMA Supercross is an honour as it demands a skillset from its top riders which is second to none.
“To have taken both our riders to this level over the past couple of years is pretty amazing.
“We have had fantastic support from some great people out in the States, as well as our forward-thinking UK team partners who realise the value and effort it takes to put it together to go racing at the highest level on a different continent.”
Daytona Thomas Ramette