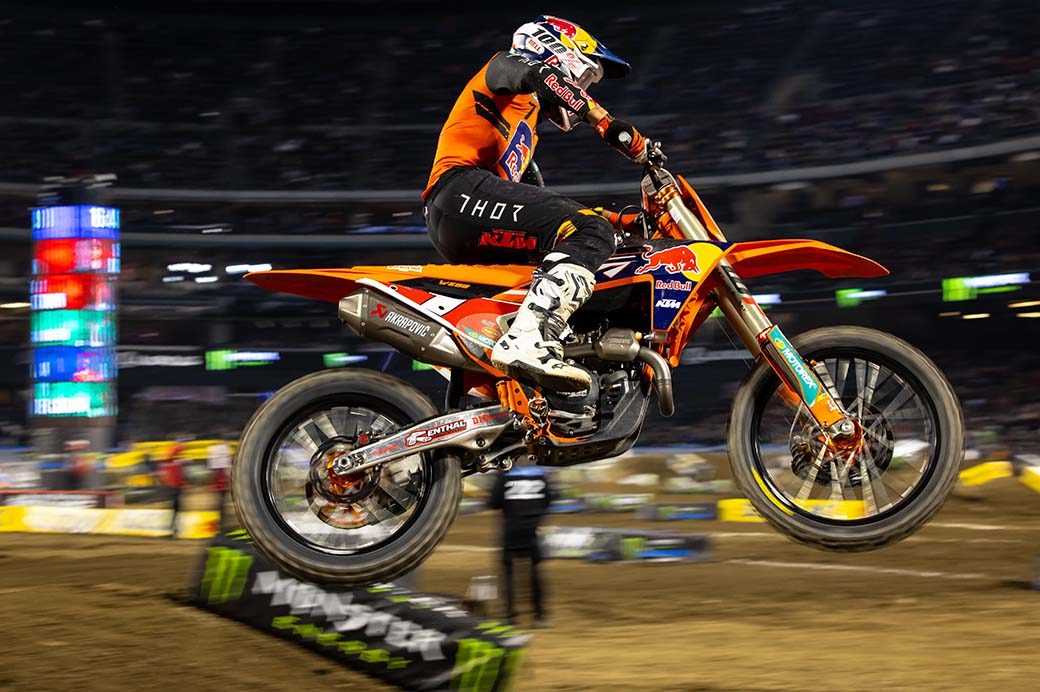 With a striking podium performance from defending 450SX Champion Cooper Webb in second, and teammate Marvin Musquin finishing just off the podium in fourth, Red Bull KTM is off to a positive start to the 2022 race season.

With the proverbial weight of the #1 plate, Webb welcomed the challenge as he charged off the line to capture a third-place start in the opening 450SX heat race. He raced inside the top three for the first four laps until a small tip-over dropped him back a couple positions halfway through the race. He swiftly recovered to secure a fifth-place transfer into the Main Event.

In the main, Webb found himself in the thick of an early top-five battle and he was surrounded by a deep pool of talented riders up front. The two-time SX champ steadily worked his way toward the podium and with six laps to go, he made his move into third. Determined to finish strong at the season opener, Webb continued his charge to ultimately land second place on the night. 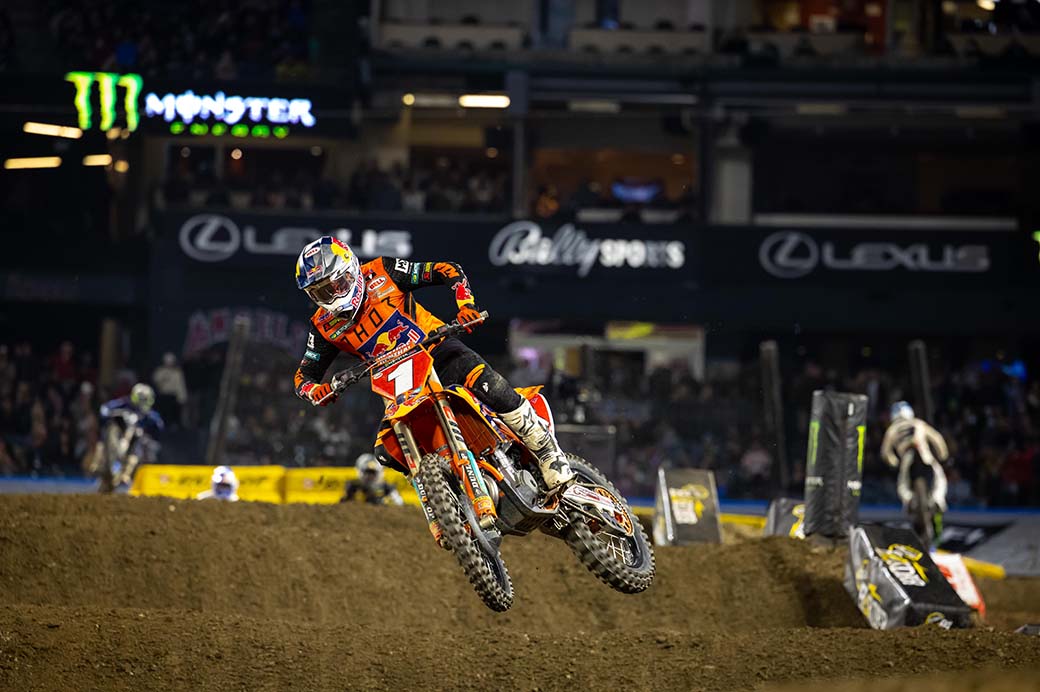 Cooper Webb: “It was a dog fight tonight! Fun race, but a really tough race. The track got super rough and a lot of us got out front just duking it out. I felt like I fought hard the whole time, made some good passes and got myself in a really good position. I kind of struggled a little bit with the track so I was pumped to come out with a second – great points and it’s the best I’ve ever done at the opener so we’re looking to keep the ball rolling. It’s great to be back in Anaheim and it’s fun to be back racing!”

Musquin, the sixth-place qualifier, grabbed a top-five start just behind Webb in 450SX Heat 1, and he ran a solid pace up front for most of the race. 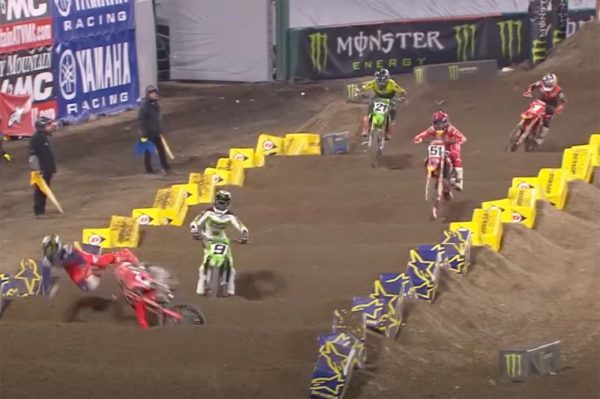 Getting caught up with another rider high in the corner, Musquin was sent off into the tough blocks and lost substantial time getting back on-track. Finding himself well outside qualifying position with only a few laps to go, the French rider powered through the final lap to command an eighth-place transfer spot.

With an unfavourable gate pick for the Main Event, Musquin started back in ninth but he quickly positioned himself just behind the fifth-place battle.

He lost positions in another mid-race crash but he made an immense push to land himself in a dramatic battle for fourth with Chase Sexton. After dicing back-and-forth on the final lap, Musquin was able to secure the upper hand just before the chequers. 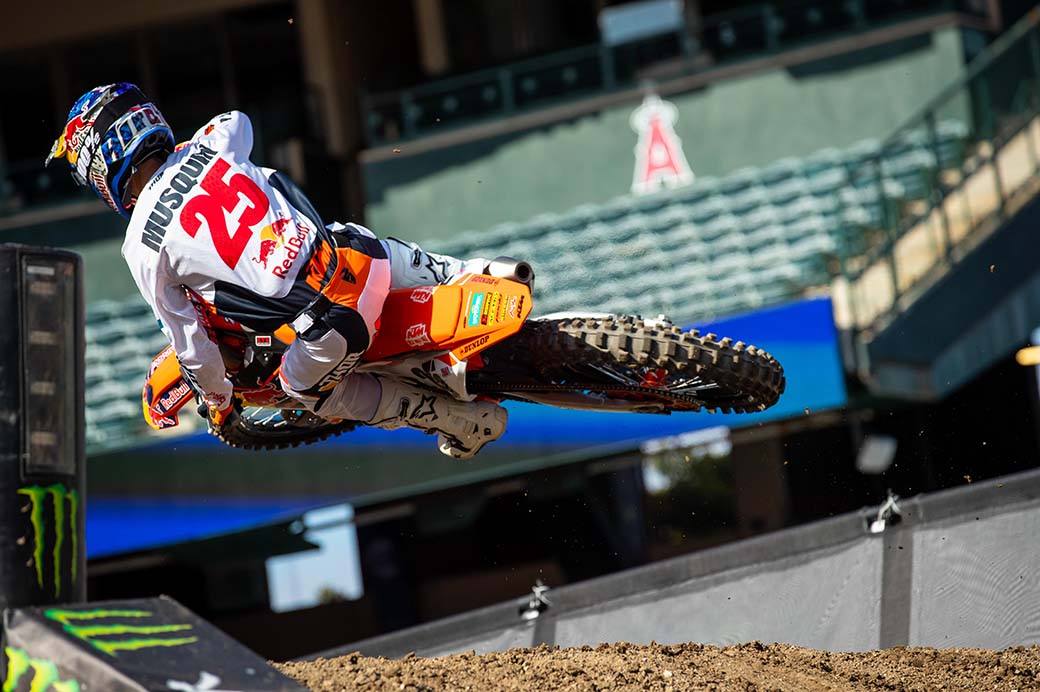 Marvin Musquin: “I’m happy right now. It was a long and tough day, with quite a fight for the Main Event. I did my best with outside gate pick and I made some good passes, so I was pumped on the riding and the intensity early on. I made a couple of mistakes and I lost contact with Cooper, and then Malcolm passed me. I tried to pass him to the inside but unfortunately, he railed the corner and we hit each other – he didn’t know I was coming – and we both went down. I got up and came back to fourth place, that was amazing. I’m pumped on the push and with the results, to be honest, with all the drama that happened during the main.”

Red Bull KTM’s newest rider, Aaron Plessinger, had a rocky start to the season as he suffered a pair of crashes during practice and qualifying. Salvaging an uncharacteristic 19th place qualifying position, Plessinger came out swinging when the gate dropped as he captured a top-five start in 450SX Heat 2. Settling into a good pace aboard the new KTM 450 SX-F FACTORY EDITION, Plessinger came on strong midway through the race to secure a solid fourth.

In the Main Event, Plessinger didn’t get the best start and he found himself back in 15th on the opening lap. He chipped away throughout the race to make his way into a top-10 position in the final laps, ultimately finishing ninth in his first race with the team. 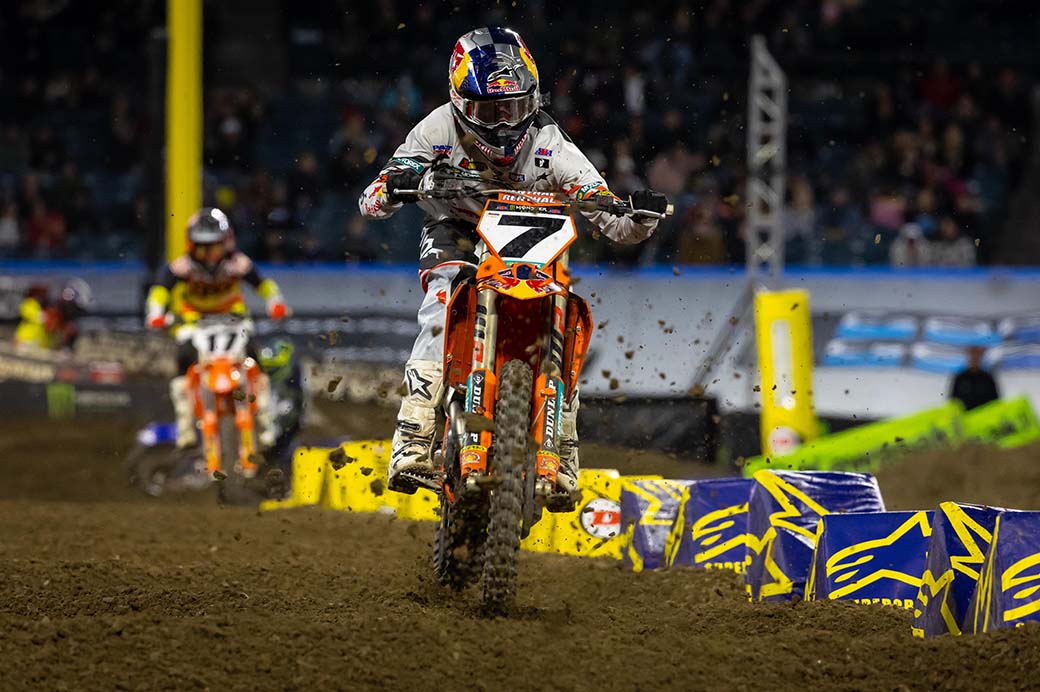 Aaron Plessinger: “It was a pretty rough day for me actually. I started out in Free Practice going down and then I went down in the first qualifying practice as well. I turned it around and ran some decent laps in the second qualifier but it wasn’t a very great position. I got a decent start in the heat race and ran in fourth pretty much the whole time. In the main, I didn’t get a good start at all and I was back of the pack battling. About halfway through, I turned it up a little bit and made some passes up to ninth. Overall, I’m pumped to get through the first round healthy and we’ll back at it in Oakland!”