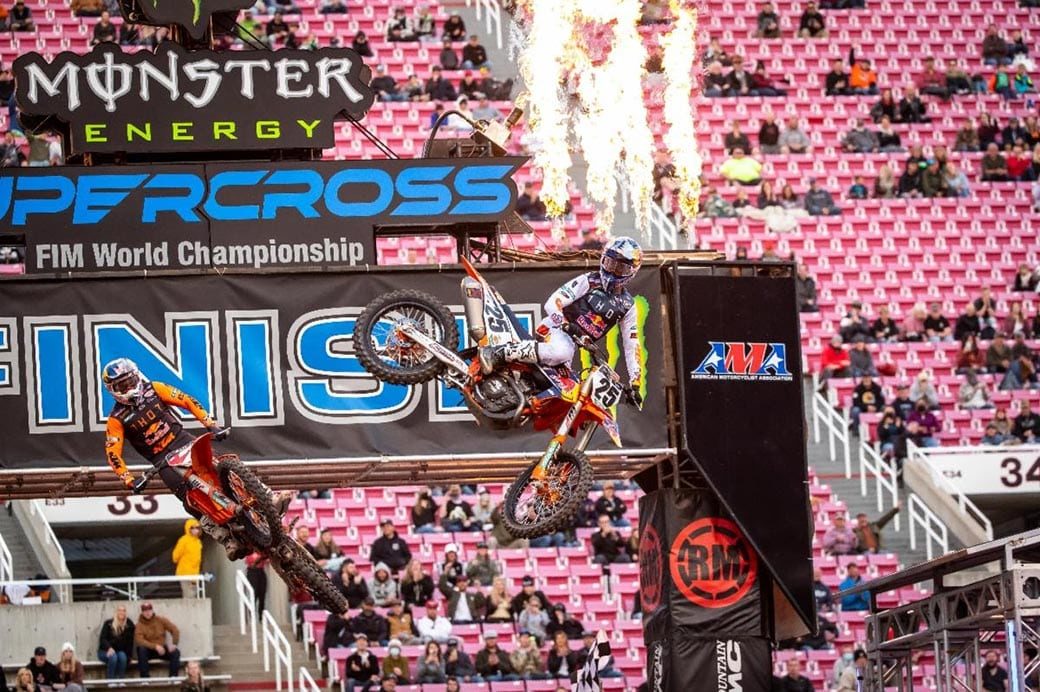 The Monster Energy AMA Supercross, an FIM World Championship made a dramatic return to Rice-Eccles Stadium with a thrilling event at Round 16.

Red Bull KTM’s Marvin Musquin took the 450SX Class win, his first since 2019, with one round remaining in 2021. Red Bull KTM’s Cooper Webb crossed the checkers right on Musquin’s rear wheel for a second-place finish and Monster Energy Star Racing Yamaha’s Malcolm Stewart earned his career-first 450SX Class podium with a third-place finish in front of the limited-capacity, pod-seated fans inside the open stadium.

The Eastern Regional 250SX Class racers returned to racing after a 10-week break and Monster Energy Pro Circuit Kawasaki’s Jo Shimoda earned his first-ever win with a display of speed and composure under pressure to take the championship battle to the final round. 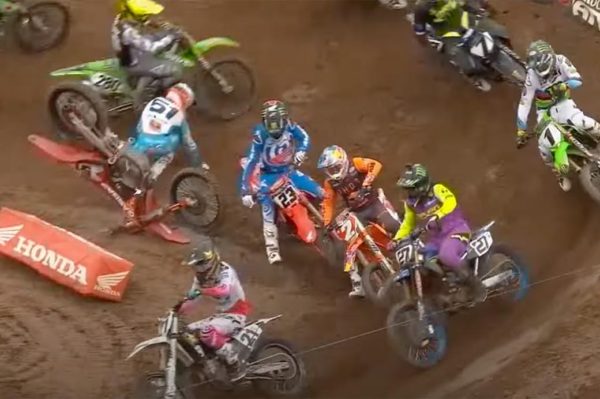 When the gate dropped for the 450SX Class Main Event it was Team Honda HRC’s Ken Roczen who grabbed the holeshot and immediately took control. Roczen sat second in the title points, down by 16 to Webb, and looked completely in command as Webb struggled to recover from a ninth-place start. Musquin sat in second and lost time to Roczen in the early laps as defending champion Monster Energy Kawasaki’s Eli Tomac tried to fight forward from just inside the top ten after a bad start.

Webb moved quickly up to fourth with Malcolm Stewart putting heavy pressure on him, making several near-passes as the two tried to climb forward to reach third place being held by Rockstar Energy Husqvarna Factory Racing’s Jason Anderson. Two and a half minutes into the race, Webb sat 5.7 seconds and seven championship points back from Roczen when Tomac had a tip-over and dropped back more spots, remounting nearly outside of the top ten.

At the race’s midpoint, Musquin began to chip away at Roczen’s lead as Webb contended with the constant pressure from Stewart and inched closer to Anderson. With less than ten minutes left on the clock in the 20-minute plus one lap race Webb got around Anderson and into a podium spot. Then Roczen made a mistake exiting the corner before the whoops and went down, dropping him to fifth and handing the lead over to Musquin. Webb broke clear of other riders as he slowly reeled in KTM teammate, Musquin, who was navigating through the lappers. Musquin held his pace and his position and brought home the win, his first since 2019, with Webb following in second and Stewart completing the podium in third. The finish marks Stewart’s first career 450SX Class podium finish.

The Eastern Regional 250SX Class delivered a history-making nail-biter. Jo Shimoda, a late add to the Monster Energy Pro Circuit Kawasaki team this year, grabbed the holeshot and held the top spot despite repeated attacks by two separate riders throughout the 15-minute plus one lap race. First it was Troy Lee Designs / Red Bull / GASGAS Factory Racing’s Michael Mosiman who tucked a wheel under Shimoda several times, and in fact pulled alongside through one rhythm section, but Shimoda would not be denied the front spot and bumped his way right back into the lead in the next bowl turn. 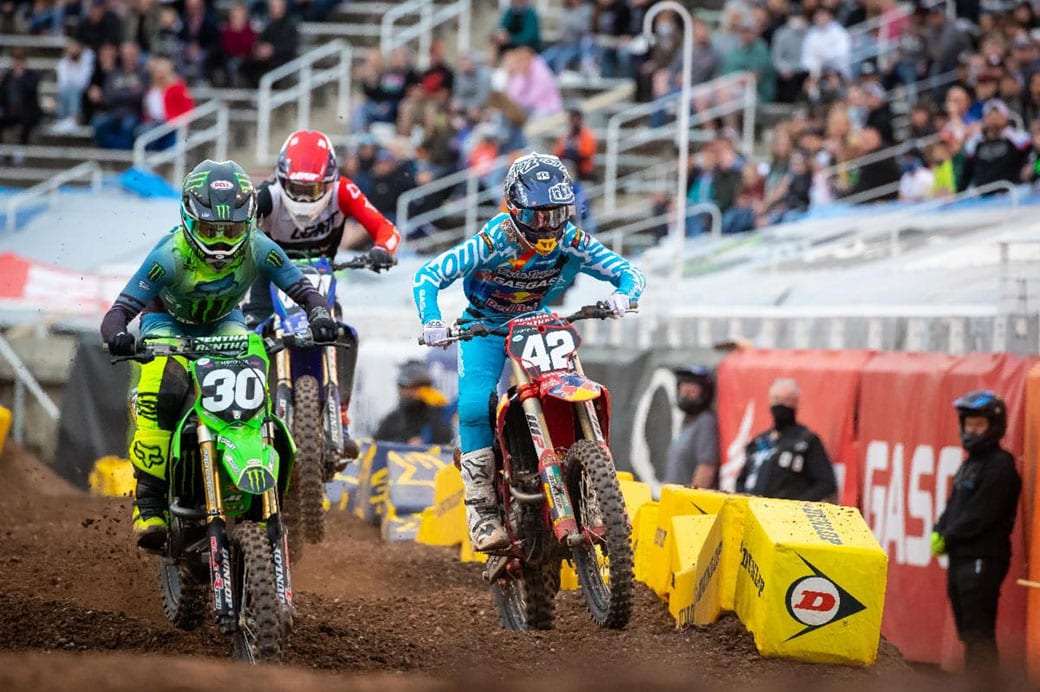 With under four minutes on the race clock Team Honda HRC’s Jett Lawrence caught and passed Mosiman and set his sights on Shimoda. The Honda rider pressured the Kawasaki rider right down to the checkered flag, but Shimoda had ice water in his veins and never made more than the smallest mistakes as he weaved through lapped riders on the tight Utah track. Shimoda earned his first Monster Energy Supercross win, making him the fourth winner in the division this year and also making history as the first Japanese racer to step atop the podium. Sweeter still, his family was in Utah, visiting from Japan, and able to witness the race thanks to the efforts made to allow fans in the seats in 2021. The win adds Japan to the list now of nine countries to have won a Monster Energy Supercross race. 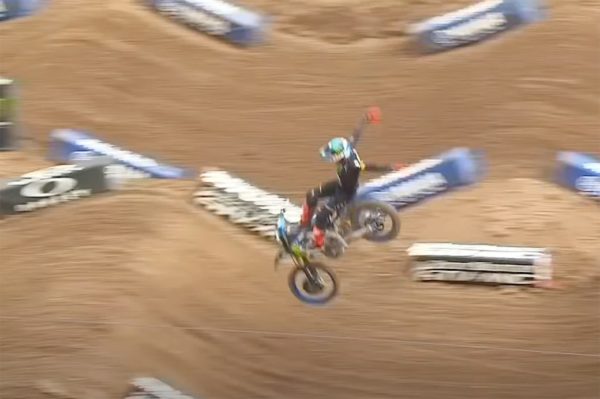 Monster Energy Star Racing Yamaha’s Colt Nichols, the red plate holder, needed to only gain two points on Shimoda going into the Main Event to wrap up the title one round early. Nichols crossed the holeshot stripe outside the top five and although the fastest rider on the track at several points, was slow to climb through the pack. Nichols managed a third-place finish, taking the title to the final race, the always unpredictable Dave Combs Sr. 250SX East/West Showdown.

Monster Energy Star Racing Yamaha’s Christian Craig, who sat eight points out of first at the start of the day, injured his left ankle in qualifying. He lined up for Heat Race two but after one rhythm section it was evident he would not be able to compete and rode off the track and back to the pits. Craig’s departure meant his teammate Colt Nichols would start the Main Event with a 28-point lead over Shimoda and the realistic chance to claim the title at the race.

A surprise announcement just prior to the event was Martin Davalos’ retirement. A crash on Friday during press day hastened the announcement after Davalos incurred a broken collarbone and concussion. The amiable racer moved to the United States at the age of 15 and competed at the highest level of the sport, professional Supercross, for 16-seasons and racked up five 250SX Class Main Event wins.

Tickets are on sale for the season finale on Saturday May 1 in a limited-capacity, pod-seating format. Fans can also catch the action live on Peacock and NBCSN or watch the re-broadcast on NBC on Sunday May 2 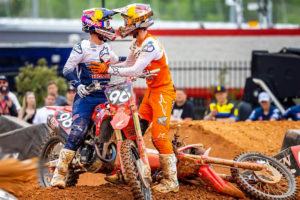