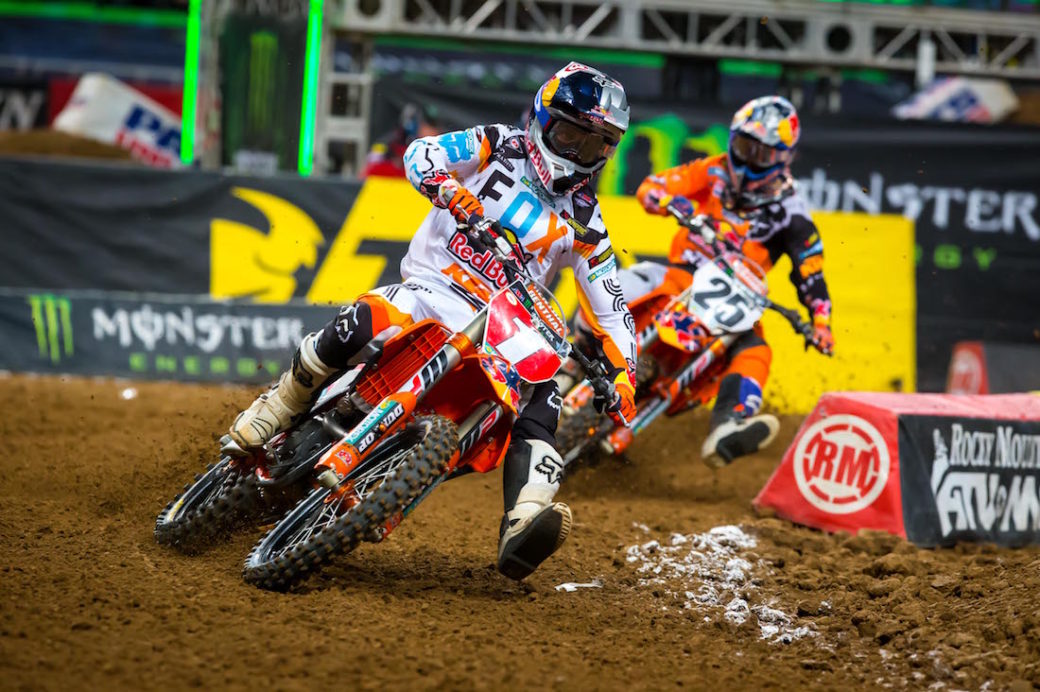 It was a solid day of racing for the Red Bull KTM Factory Racing Team on Saturday as Ryan Dungey and Marvin Musquin finished atop the podium in the 450SX class, while TLD Red Bull KTM’s Jordon Smith earned his second-straight victory in the 250SX East division for Round 13 of the AMA Supercross Championship.

Dungey’s second place finish allowed the three-time AMA Supercross Champion to maintain his points lead over Eli Tomac with four rounds to go in the series.

In 450SX Heat 1, Ryan Dungey and Marvin Musquin both got off to a great start aboard their KTM 450 SX-F FACTORY EDITION machines as they settled into the second and third place positions on lap one. With three laps to go, Dungey made his move on Chad Reed to take over the lead, with Musquin following suit to second shortly after. The Red Bull KTM Factory Racing duo finished out the heat race in the top two positions with three-time 450SX Champion Dungey at the helm.

Musquin made a few attempts to get past Dungey in the opening laps but Dungey eventually broke away as he continued to chase Tomac in the lead position. Dungey got stopped up behind a lapped rider where he lost a few seconds to Tomac in the overall running. From there, Dungey pushed hard to charge his way back to finish a hard-fought 2nd place in St. Louis.

Dungey: “I honestly am so excited about tonight. I felt like I rode awesome, we don’t win them all sometimes but I felt so good. We were catching Eli there for a bit and I was really happy with my riding. I said to myself today, unless my heart explodes I’m gonna go for it and that’s what I did. Overall I’m happy with tonight – the team Red Bull KTM guys are doing an awesome job backing me and supporting me and I’m not even disappointed. I was really pumped on tonight and excited. Tough track, tricky conditions but we’re healthy and safe moving forward and we have to build on that. I have a lot to be thankful for so I’m happy.”

Dungey added: “I definitely for sure want to win but that’s a given, we all do. Eli is tough right now. He’s riding really good, he’s in peak condition right now in his career and everything is clicking for him. So when a guy is like that he’s hard to beat. I found that out many times in my career, so that’s the challenge of racing, that’s the challenge of pushing me to get better and it tests me but it’s a good thing. Tonight was incredible, I was so pumped and I’m excited, I really am. I don’t know where this excitement is coming from but I really am. It’s step forward, I’ll take it.”

Musquin: “Overall I’m having good weeks of training, good weekends and feeling good on the bike, having fun. It’s good to be up on the podium but at the same time I’m disappointed a little bit. My first lap was unreal because the start wasn’t so good and I made so many passes and I got third at the end of the first lap, it was awesome. I felt like I was pushing Ryan and I was quicker – I was going fast and then I couldn’t make the pass, I feel like I tightened up a little bit. The track was really tough, I mean the dragon’s back – that’s where I crashed in practice and I didn’t want to do the same mistake. I kind of played it safe with third place, that’s all I could do tonight.”