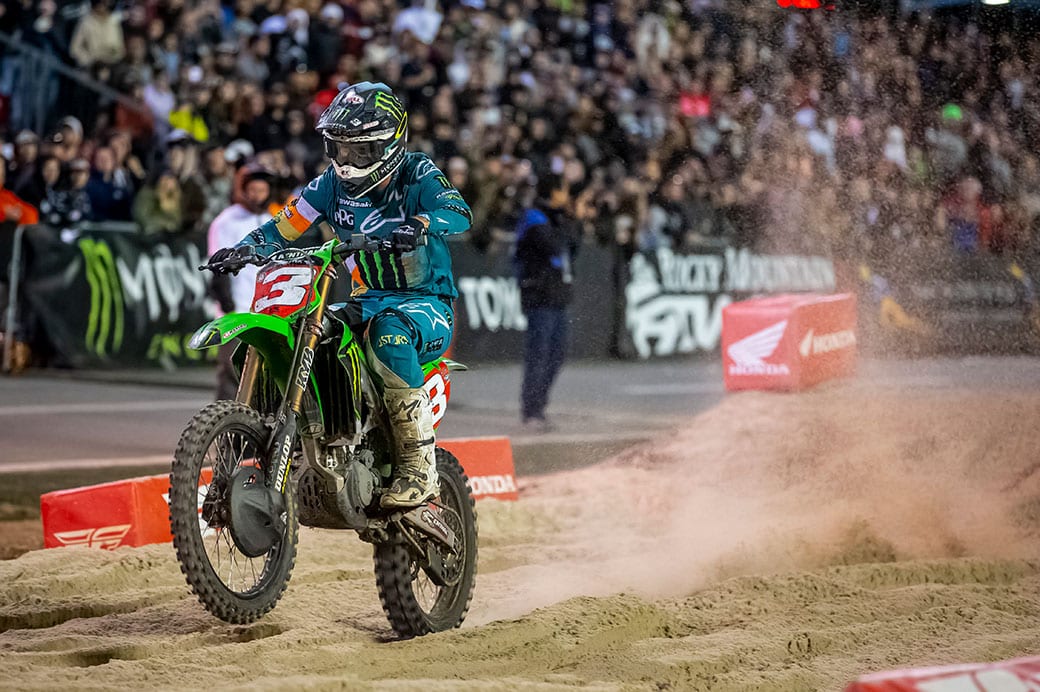 The Monster Energy AMA Supercross series has become one of the most high-profile off-road motorcycle sporting casualties of the Coronavirus outbreak with organisers postponing the championship after 10 of 17 rounds.

Currently led by Eli Tomac (Monster Energy Kawasaki) by three points ahead of Ken Roczen (Team Honda HRC), the series has been halted after the Daytona event with the cancellation currently covering events in Indianapolis, Detroit, Seattle, Denver and Foxborough.

A question mark also hangs over whether the final two rounds in Las Vegas and Salt Lake City will go ahead.

‘The health and safety of everyone attending and competing in our live events, as well as our touring personnel, is our top priority,’ reads the official statement. ‘We will continue to monitor the situation. We value you as a fan and appreciate your patience and understanding during this unprecedented time.’

Speaking to racerxonline, industry insider Steve Matthes – who described the situation as “completely unprecedented in our sport” – gave web surfers an insight into the run-up to the Indy SX that was scheduled for last Saturday.

“It’s been insane for sure,” he said. “The whole time on Thursday we were talking about the race being held but with no fans. But, as I was going to the airport, a lot was changing and at one point I found myself waiting to board the plane thinking I should just dip out.

“A rider had texted me that it was going to be cancelled altogether as the governor of Indiana had put out a notice about not having any events over 250 people which, doing the quick math, meant the race couldn’t happen. But there was nothing official yet.

“I sat down in my seat and heard from another person that the race was cancelled but still, nothing official. I basically found out that it was done as the plane was taking off in Vegas so looks like I was getting a ride to Chicago [my layover] and back. I should’ve faked a heart attack or something while we were taxiing.”

Matthes didn’t rule out a chance of the series recommencing at a later date.

“I do think we get some races in – I would bet highly on that – but I cannot see how we get all 17 rounds in,” he added. “Unless there’s some sort of unprecedented move where Feld works with MX Sports to move some outdoor races. I know there’s a plan out there for SLC and then six races in Las Vegas [double headers or mid-week races] but not sure that’s going to work either.