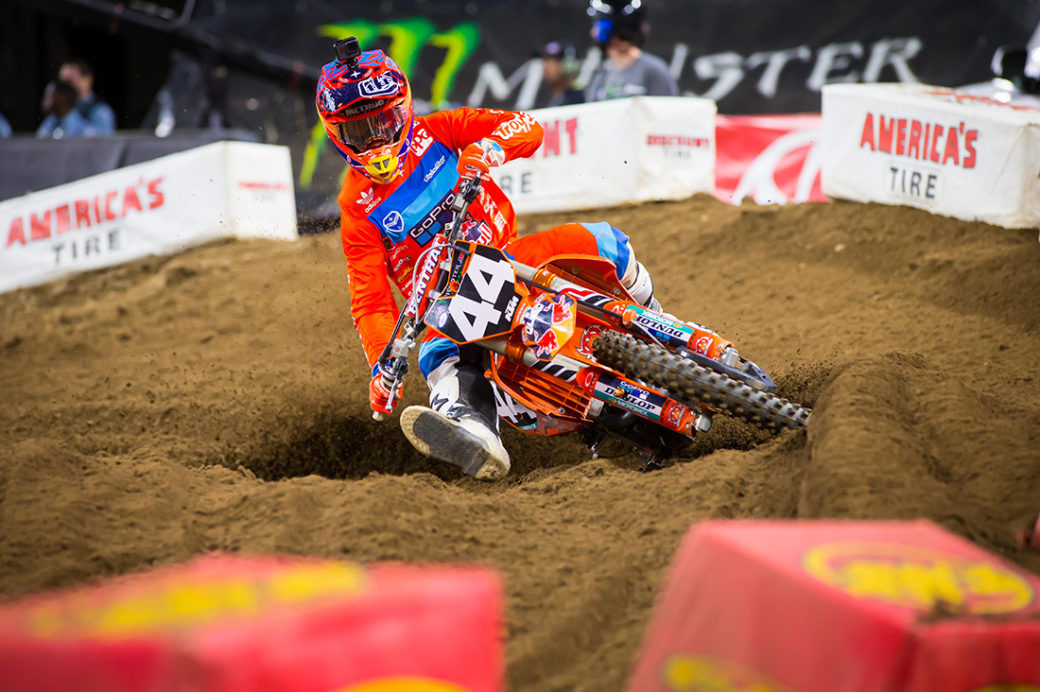 The AMA Supercross Championship made its return to Minneapolis for the first time since 2013, where it took place inside the newly built U.S. Bank Stadium.

In the Main Event Dungey and Musquin were inside the top six on the opening lap. Dungey quickly moved into the second place position behind Eli Tomac, while Musquin climbed his way into third around lap five. Throughout the 26-lap Main Event Musquin continued to increase the pressure on Dungey and with only a few laps to go Musquin made the move on his teammate to take over the second place position.

Musquin put on a charge to catch up to within six seconds of Tomac out front, where he was able to pull a gap on Dungey to ultimately finish 15 seconds ahead for second place.

Musquin: “The day started off rough – I got hit from behind in the heat race and went down. I was trying to go through safe but it didn’t work out. Thankfully we won the semi and get a decent gate pick that was the goal. It actually was not that bad going to the semi because you get to do more laps and learn more of the track.

In the Main Event I was able to make some good passes in the beginning but they (Tomac and Dungey) had a good gap on me and I was trying to put on the charge. I thought it was going to be tough to catch those guys. Obviously Ryan made a mistake but the lappers were really tough out there and the sand section was difficult but I felt like I did good through there. After winning last weekend and then to back it up with a 2nd place tonight is pretty awesome.”

Dungey, who made a mistake early in the race that could have cost him a podium finish, earned a solid 3rd place finish to claim his sixth podium finish of the season.

Dungey: “I definitely had a close call there at the beginning. That section was tricky all day, it sent me into a dive but luckily I saved it and I was able to jump off the side of the track. I had a good charge with Eli at the beginning but he was riding really well and he was able to break away. I made a couple mistakes and then there was Marvin – when he passed me, I saw some of his lines and they were good. It’s good to be back home and to have Minneapolis back on the stop. It’s cool that these people in Minnesota were able to get a taste of Supercross once again and it’s good for the sport.”

The 250SX East Championship kicked off on Saturday and TLD Red Bull KTM’s Jordon Smith got off to a great start with a second place finish in the class. Smith jumped out of the gate to assume the early lead and maintained the lead through the first half of the race. Smith eventually dropped to the second place position where he nailed down a podium finish in the opening round of the East division.

Smith: “I knew I had to get a good start out there, the track was really one lined and I knew it was going to be tough to pass. I got a really good start and just tried to hit my lines and stay clear of the lappers, it was pretty tough out there with all the ruts and stuff. Overall it was a good race and I’m glad to get out of here with a good finish.”