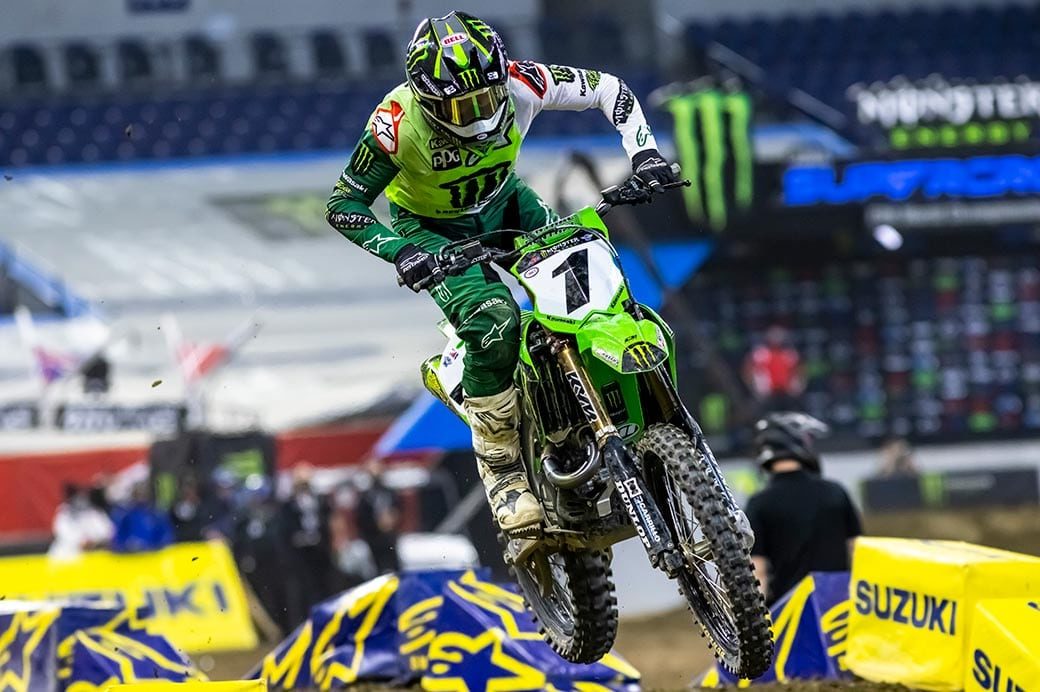 In the 450SX class, at the final round in Indianapolis, Monster Energy Kawasaki rider Adam Cianciarulo raced to a top-five finish, while team-mate Eli Tomac finished two positions behind in seventh place after a late-race incident that ultimately cost the defending champ a chance at a podium finish.

For the Monster Energy Kawasaki riders, Saturday began on a positive note in qualifying as the #1 machine of Tomac clocked in a 46.833 lap time, good for second fastest in combined qualifying, while team-mate Cianciarulo was close behind with a 47.225 lap time to qualify in third for the night show.

In the first 450SX heat race of the night, Tomac rocketed his KX450 race machine into a top-four start before moving up to second during the opening laps. Sitting in second, the #1 began creeping his way closer to the leader to get within one second, but was unable to close the gap enough to attempt a pass and finished in second.

When the gate dropped for the second 450SX heat race, the #9 of Cianciarulo found himself in 10th after Turn 1. With his work cut out for him, Cianciarulo began chipping away at the riders in front, advancing two positions into eighth within the opening lap. The #9 KX450 set his sights forward making passes until Cianciarulo came together with another rider and fell back to eighth. Never one to give up, the #9 machine regrouped and charged his way back up into fifth place by the end of the race.

As the gate dropped for the final 450SX Main Event in Indianapolis, it was Cianciarulo who launched off the gate ahead of the pack and was looking to have his first holeshot of the season before running wide in the first turn and moving back into fourth just in front of his team-mate Tomac, who sat in fifth. Tomac followed behind his team-mate for a couple of laps before making the move into fourth and began charging towards third.

As the race progressed, Tomac ran into lapped traffic but made the proper adjustments to close the gap to third with less than five minutes left in the race. The defending champ had his eyes on a podium position and began to make a charge but was caught in an unlucky situation when the third-place rider fell, leaving Tomac with nowhere to go and forcing the #1 to crash into the downed rider’s bike. Tomac quickly picked himself up but fell back to seventh on the last lap, while team-mate Cianciarulo capitalized off the mistakes of others to finish in fifth place.

Saturday’s seventh-place finish keeps Tomac third in points in the 450SX point standings, while Cianciarulo moves up one spot into fourth overall in the points.

Eli Tomac: “I’m definitely a bit disappointed with how tonight went. I was feeling great on my KX450 and got a great start in my heat race, which helped me stay close to the leader for the entire race. In the main, I didn’t get the best jump and that hurt me.

“The field this year is stacked with talent and having to work my way from the middle of the pack up to third isn’t easy. It’s unfortunate to have a podium taken away from me because of someone else’s mistake, but with a good start I can avoid all that. I know what I need to work on this week to be fully prepared for the next round.”

Adam Cianciarulo: “My KX450 was hooking up great all day. I know my speed is there and the bike is working great, I just need to work a little harder on some different areas of my fitness and I know I can be up there with the top-3 riders. Tonight didn’t go as planned but we got another solid result and I’m happy about that. Time to reset and get ready for next weekend.”