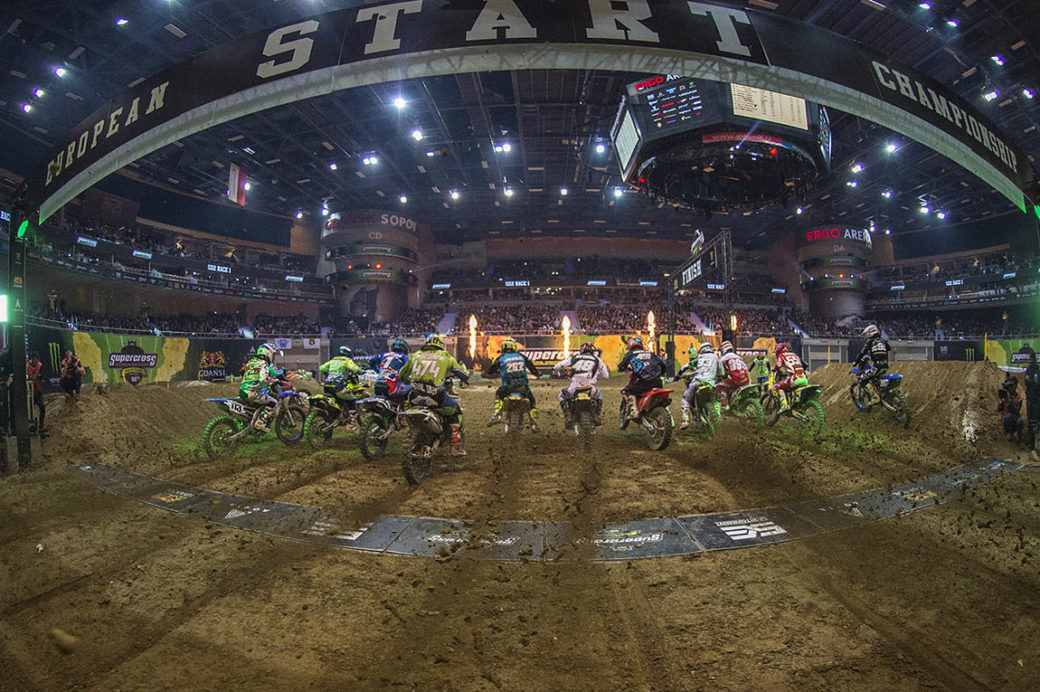 On Saturday night the FIM Europe Supercross Championship was held in the modern stadium of Ergo Arena in Gdansk where 8,000 enthusiastic spectators were presented with a spectacular show with 55 riders from 16 different nations competing in the four championship classes, SX1, SX250, SX125 and SX85.

SX1 – The premier championship was decided by two semi-finals, two last chance races and the main final to decide the 12 riders who would compete for the title of European Champion and King of Poland.

Semi-final 1 was a comfortable win for Cole Martinez from the USA who took the lead early on and maintained his advantage to the end.

In semi-final 2, French rider Boris Maillard also had a comfortable victory but not before an early battle with German Dominique Thury. Tensions were high as the 12 riders took their positions for the main 15 lap final and the last race of the evening.

Boris Mallard took the holeshot and was closely shadowed by Cole Martinez for the early stages of the race but Martinez executed a clean pass to take the lead and to extend the lead on each lap to the chequered flag. Second was Maillard from the German Thury.

A race-long battle to decide the fourth place took place between Hugo Basaula from Portugal and British rider Jack Brunnel with Basaula eventually clinging on by 0.3 seconds from Brunnel.

SX250 – This class was dominated by British rider Gradie Featherstone who won both races to end with maximum points.
But it was not easy as in the first race he had to battle with German Paul Haberland for the entire race with Featherstone just taking the lead with 100 meters to go on the final lap.

Haberland was second overall with two second-places, and much to the delight of the spectators, the Polish rider Symon Staszkiewicz took third overall with a third and fourth place in the two races.

Both races were fiercely contested throughout and big battles took place with much overtaking amongst the riders which kept the spectators on their toes. Belgium Bo De Clercq was second overall with a third and second, and Axel Boldrini from France taking the bronze medal with fifth and second place.

Both races were race long battles between the two young Germans with continual place changes nearly every lap with the first race being won by 0.5 of a second by Ostermann and 1.7 seconds in the second race. Bronze medal winner was Karlis Alberts Reisulis from Latvia with two third-places but some distance behind the two Germans.