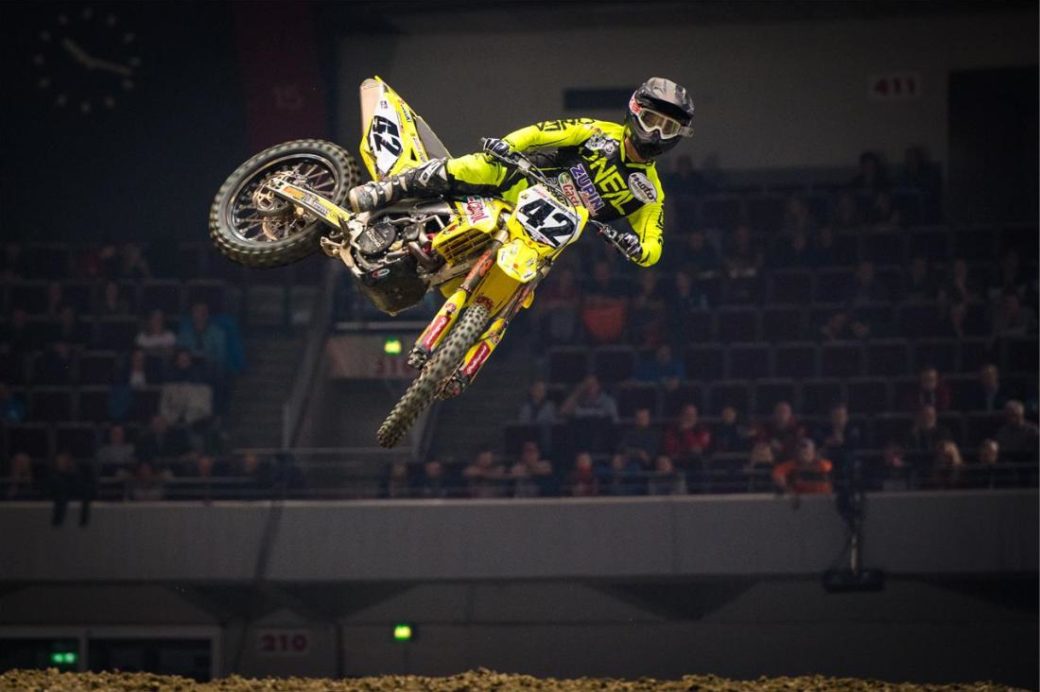 Suzuki’s RM-Z450 continued its domination of the 2016-2017 ADAC SX Cup at the series finale in Dortmund at the weekend as Kyle Cunningham took the overall event win and the new ‘King of Dortmund’ title, while Nick Schmidt clinched the championship overall.

Germany´s biggest indoor motorsport event, that traditionally ends in January inside Dortmund´s Westfalenhalle, hosted the first two of the three race days on Friday and Saturday that counted towards the championship, with the ‘King of Dortmund’ event on Sunday.

Schmidt, who races for the Sturm Racing Team, and Cunningham with Team Castrol Power1 Suzuki Moto-Base, arrived as the favourites to claim the series title. Going into the weekend, American Schmidt held the upper hand with an advantage of 23 points over his fellow countryman. But on Friday night, things were turned things upside down when Schmidt went down in the first corner of the Main Event, which put Cunningham in-line to earn a lot of valuable championship points. Then, as he was fighting for the race win, Cunningham also slipped-off and had to retire.

Saturday saw a more-familiar result: Cunningham won the race and Schmidt finished runner-up to take a well-deserved ADAC SX Championship title. Said Schmidt: “It didn´t turn out so well yesterday but I brought a comfortable lead into tonight and had no problems. I’m delighted to win this championship; it’s huge!”

“We´ve seen an outstanding success by Suzuki riders in the ADAC SX Cup 2016-2017. When you add Nick Schmidt’s victory in Stuttgart, we’ve simply dominated the German indoor season. Now we want to carry that momentum into the outdoor campaign,” Hannecke concluded.

In the SX2 class, Adrien Malaval (Team Diga-Procross) showed his strength. The French rider represented the Suzuki brand with a race win on Sunday and second place overall in the ‘Prince of Dortmund’ classification. Malaval also finished the series in fourth place.

Paul Bloy (Team Motorrad Waldmann) delivered a steady performance in the SX3 category. The talented youngster, riding a Suzuki RM 85, missed out on the Dortmund overall victory but ended the ADAC SX Cup as best Suzuki rider in third position.