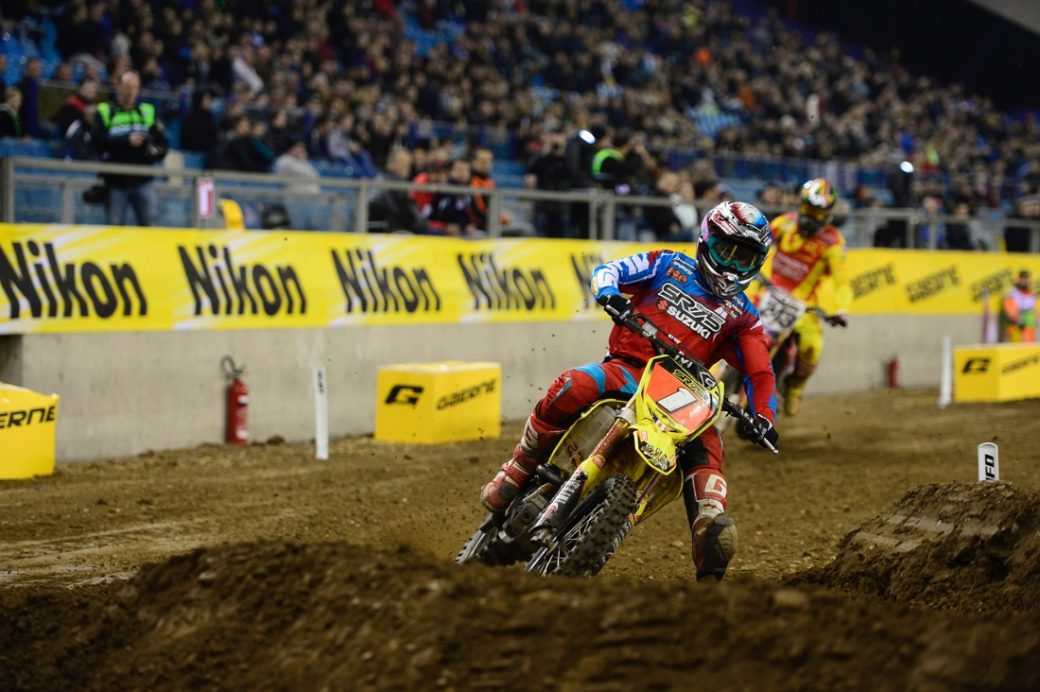 SR75 World Team Suzuki’s Thomas Ramette came up just short as he attempted to defend his European Supercross crown against a star-studded entry at Arnhem on Saturday.

After a demanding few weeks that had seen him crowned King of Stockholm and King of Poland, Ramette was also feeling the effects of his intense schedule and was suffering from sickness heading into the Dutch event.

The track – a more ‘Super MX’ style lay-out rather than a traditional technical supercross circuit – presented a fresh challenge, calling for higher speeds with a full sand section designed to test riders to their limits.

After setting second best time in first training just behind Febvre, Ramette’s pace was great but his energy levels were down and he slipped to fifth in timed training.

The European Supercross Championship was decided over the first two of three finals so the team’s focus was on these with great starts essential if Ramette was to last the pace and produce podium finishes.

Starting third in the opener behind Febvre and Gasjer, he pushed hard to pass the reigning world champion in the early laps but the relentless pace took its toll and, despite his high level of fitness, he had to back off to bring it home in fifth. It was still a great result and one that gave Ramette a good chance of retaining his title.

Ramette came out fighting in race two, nailing the holeshot and putting in a series of perfect laps as Febvre, Gasjer and Stewart found themselves mired in a pack that was stacked with talented riders.

At the halfway point Ramette was virtual champion as Febvre wasn’t in the top five and Gasjer was outside the top 10 but with a couple of laps to go he lost a little rhythm which allowed Stewart to pass.

A charging Febvre had made it up to third and he then put a great pass on Ramette in the motocross sand section before Ramette made an epic re-pass in the supercross whoops as they headed into the last lap side by side.

The final lap battle went to Febvre and an exhausted Ramette took third, earning him third in the championship behind Febvre and Gasjer.

“This was one of the most difficult days for me,” said Ramette. “It is not normal for me to be a little sick but sometimes this is not in my control. I wish my energy was normal – I gave everything I had to try to keep my European title but it was not enough.

“Romain was awesome to race with and it was great to race with him and Tim at the front of these races. My bike was amazing and my holeshot was fantastic. I was smiling after that one as our SR75 Suzuki holeshot the factory bikes.

“I am happy to make the podium and I am disappointed I could not show my normal pace tonight. My thanks as always go to the team – we really do have the best fun and enjoy every day we live.”

Team owner Geoff Walker had nothing but praise for the 25-year-old Frenchman.

“For Thomas to race at the highest level and stay healthy for this amount of time is testament to his hard work and commitment as a pro,” he said. “This was a tough and yet amazing day for us and to maintain the level we have been running since January 2 is nothing short of incredible.

“To podium tonight with these guys, on this track, is completely amazing and Thomas dug in and gave it his all. Of course we are disappointed in some ways as TR was in a position to win but this is why we race. We love what we do and my thanks go to those supporting us.”