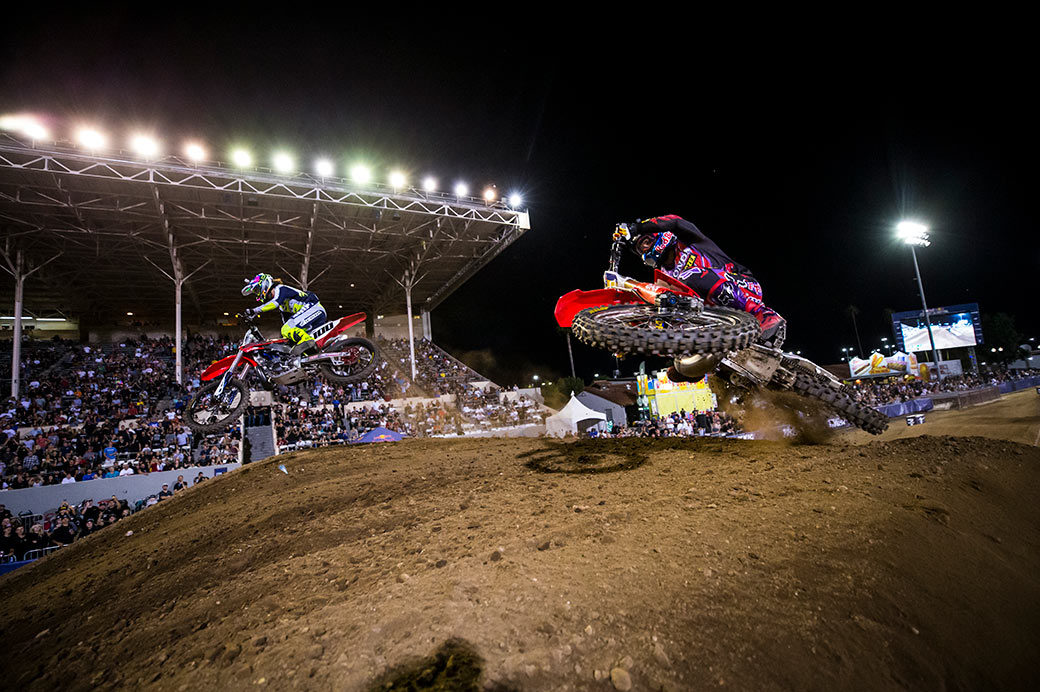 You asked for it, or maybe you didn’t, but let’s pretend you did. After a three-year pause and keeping the fans and riders on their toes with great anticipation, Red Bull Straight Rhythm is coming back with all two-stroke racing on October 15. “What could possibly be better?” you ask. For the first time ever, Moto Beach Classic and Red Bull Straight Rhythm are joining forces for fans to experience both events live and in-person in Huntington Beach. There is a 98% chance the sun will be shining, the weather will be warm, and the UV rays will be high, so pack your sunblock, hats, koozies, umbrellas, surf boards and sand toys. Bathing suits are optional. If you’re Jett Lawrence, bring your floaties.

An evolution of the events past, this year’s Red Bull Straight Rhythm remains the same with a best-of-three race format. Practice, qualifying and finals all take place on the same day, with the finals culminating just before the sun sets into the horizon. But allow us to reintroduce ourselves with what makes this one of the most fun two-wheel races on the calendar. For its seventh year, two riders will drop into the half-mile track for a mano-a-mano battle down the unwound Supercross track with whoops, jumps, tabletops and more. No points at stake and unexpected matchups (and unexpected Ws) that you literally cannot find anywhere else. It’s all about rhythm or “finding your flow” as the locals would say. And while there’s no “carving,” “epic cutbacks,” or “barrel riding,” there is guaranteed no lack of perfect harmony amongst two-stroke engines redlining, waves crashing and fans cheering, complemented by the sweet smell of sunblock, salty air and premix. The only thing that might sound better than a two-stroke may be the sweet sounds of Jason Weigandt and Daniel Blair on the race call.

The crowds will be flocking to the Huntington Beach State Park as the best of both worlds with action sports and motocross intersect. Tickets for the event are on sale now with early bird prices available until September 17. Each single-day ticket allows entry to Red Bull Straight Rhythm, Moto Beach Classic and the beach. OK, fine, beach access is free. 20,000 tickets with grandstands, concessions, vendors and more can be purchased at https://red-bull-straight-rhythm-tickets. Gates open at 10:00 a.m. PST for spectators to view the practice and qualifying rounds.

General Admission: $35
A general admission ticket allows entry to both events and full venue access with viewing from multiple points alongside the track. Price increases to $45 after Sept. 17.

Bleacher Seating: $50
A bleacher seating ticket allows entry to both events and full venue access with guaranteed seats in the trackside grandstands. Price increases to $65 after Sept. 17.

The inaugural Moto Beach Classic started out in 2017 as a wild idea from Roland Sands and crew and has developed into a Southern California motorcycle cultural explosion. Prepare to feel as close to racing as you can get without being part of the action yourself as Super Hooligan flat track racing hits the beach on a specialty-built dirt oval adjacent from the start of the Red Bull Straight Rhythm track. Moto vendors, art, custom motorcycles, and dirt track racing meets head-to-head racing in a family-friendly day to remember. Go to motobeachclassic.com for racing and vendor information.

Since the last event in 2019, some riders have aged, some have retired, some have returned, and some new faces from overseas have emerged (hint, hint). Full rider roster and more event information will be released in the coming weeks. For those that can’t make it to the event, catch all the action of Red Bull Straight Rhythm streaming live exclusively on ESPN+ on October 15, with coverage beginning at 2:30 p.m. PST.