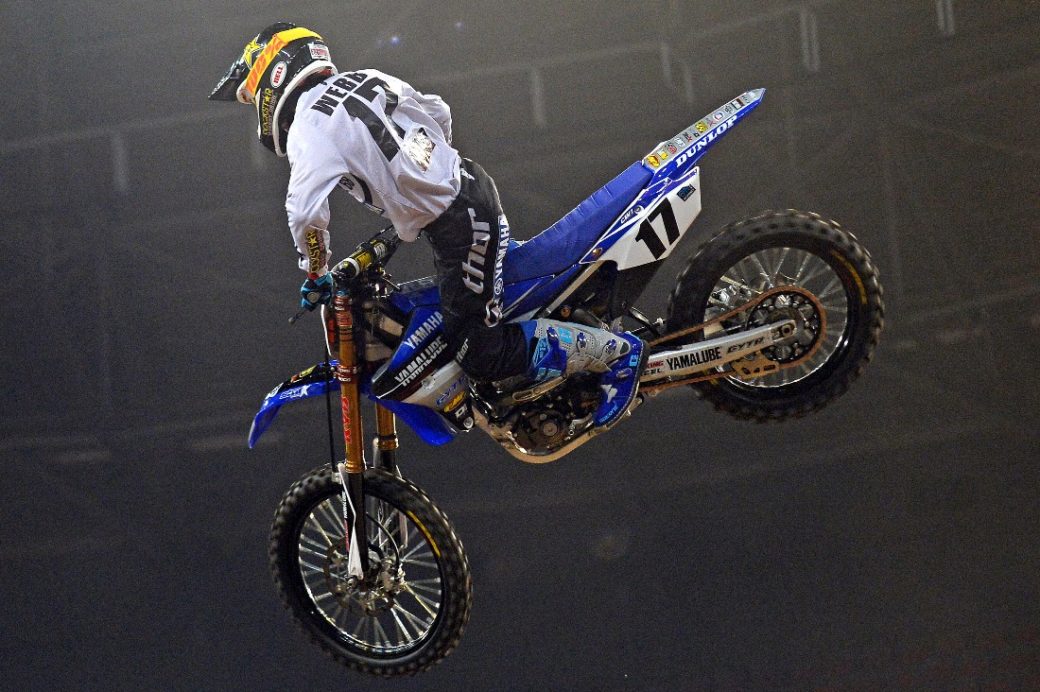 Home hero Chad Reed and AMA ace Cooper Webb traded wins in the Allphones Arena, Sydney, over the weekend but it was the 20-year-old from North Carolina who won when it really mattered to lift the inaugural AUS-X Open title.

Veteran Aussie Reed, a two-time AMA SX champion, drew first blood in front of a capacity 15,000-strong crowd with a hugely-popular gate-to-flag win in Saturday night’s Main Event.
Gavin Faith hung with him for the duration of the race and Dan Reardon came home third to make it an
all-Australian podium as Webb fought his way through to fourth after a shocker of a start.
“I’m super-pumped to win here in front of the home crowd at the AUS-X Open in Sydney,” said Reed. “To see all these fans here at Allphones Arena going absolutely nuts all night is massive for supercross in Australia and I can’t thank everyone enough for getting behind the AUS-X Open.”
But the roles were reversed the following night when Webb started strongly and Reed struggled out of the gate.
Lawson Bopping led initially but was pushed back to fourth as Reardon, Webb and Reed went by but the trio then got tangled up, handing the lead back to Bopping.
Webb was first up and quickly chased Bopping down who was pushed back to third at the flag by Reed.
“I’m stoked to be crowned the AUS-X Open champion in Sydney,” said Webb, the 2015 AMA West Coast 250 SX champ. “It was a crazy race to say the least!
“I knew it was going be a tough race to win, you know Chad’s the fastest guy here and I knew he was going to be extremely hard to beat but I just put my head down and tried to be smart and I held him off, barely.”
American Jimmy Decotis won the SX2 class on both nights, beating off Wade Hunter and Jackson Richardson on Saturday and Richardson and Geran Stapleton on Sunday.
The highlight for many were the three-lap head-to-head races between Reed and American legend Ricky Carmichael with the riders receiving standing ovations after Reed narrowly beat RC on both nights.
“Win or lose it’s a win for me this weekend and thanks so much to the fans out here for making the AUS-X Open such an awesome event,” said Reed. “This event is a real boost for supercross in Australia and I just want to thank Ricky and Cooper for coming out and most importantly the fans – it’s been an awesome weekend back home.”
Carmichael, who officially retired at the end of 2007, showed his signature speed and only lost Sunday’s race after a daring pass by Reed in the closing stages of the final lap.
“It was an exciting weekend and you couldn’t have asked it to turn out any better than the way it did,” he said. “The fans were fabulous and personally they gave me an incredible welcoming and I’m thankful for the opportunity and hope to be back here in Sydney again.”
Saturday’s Monster Energy Best Trick award went to Australia’s Jackson Strong for a one-handed front-flip that earned him a perfect 10 to edge out Japan’s Taka Higashino in second and Rob Adelberg in third.
Strong front-flipped his way to another win on Sunday from Tom Pages and Higashino to sweep the event and take home $40,000.
AUS-X Open Championship
AllPhones Arena in Sydney, Australia
SATURDAY
SX1 Class: 1 Chad Reed, 2 Gavin Faith, 3 Dan Reardon, 4 Cooper Webb, 5 Daniel McCoy, 6 Lawson Bopping, 7 Kade Mosig, 8 Kale Makeham, 9 Cheyne Boyd, 10 Luke Styke.
SX2 Class: 1 Jimmy Decotis, 2 Wade Hunter, 3 Jackson Richardson, 4 Geran Stapleton, 5 Lewis Woods, 6 Jack Simpson, 7 Joel Wightman, 8 Luke Wilson.
SUNDAY
SX1 Class: 1 Cooper Webb, 2 Chad Reed, 3 Lawson Bopping, 4 Daniel McCoy, 5 Daniel Reardon, 6 Cheyne Boyd, 7 Robbie Marshall, 8 Aaron Tanti, 9 Jono Krusic, 10 Josh Spanos.
SX2 Class: 1 Jimmy Decotis, 2 Jackson Richardson, 3 Geran Stapleton, 4 Joel Wightman, 5 Tomas Ravenhorst, 6 Jesse Madden, 7 Jake Vella, 8 Lewis Woods, 9 Jack Simpson, 10 Jake Williams.
AUS-X Open